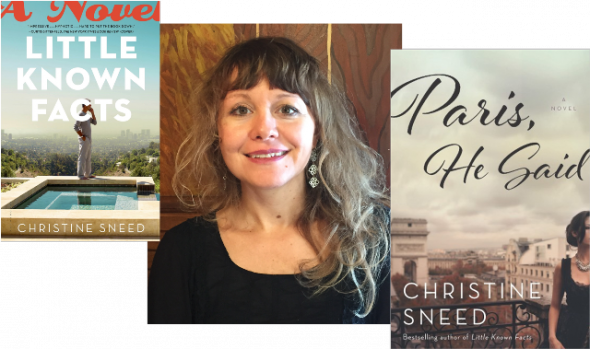 Please join us for a Parisian-themed evening featuring Little Known Facts author Christine Sneed, who will read from and sign copies of her latest novel, Paris, He Said, a novel about desire, beauty, and its appreciation, and of finding yourself presented with the things you believe you’ve always wanted, only to wonder where true happiness lies.

Jayne Marks is questioning the choices she made in the years since college—her tedious day job as an assistant at an accounting firm, her tedious evening job selling shoes, her tiny Manhattan apartment with paper-thin walls, her somewhat dull boyfriend—and struggling to pay her bills and stay afloat. Worst of all, she’s not painting. Until she meets Laurent Moller, who owns and operates two successful art galleries, one in New York and one in Paris, who becomes Jayne’s lover and benefactor, and who offers Jayne the chance to move to Paris with him. There, she’ll live in Laurent’s opulent apartment, where she’ll have time and financial support to begin her career as a painter. Laurent, however, seems to have other women in his life, and he refuses to explain his whereabouts when he’s not with her. Jayne, too, has an ex-boyfriend, much closer to her own age, whom she still has feelings for. Bringing Paris gloriously to life, Paris, He Said is a psychologically adept novel about romance and art—and Paris—from the award-winning author of Little Known Facts, Christine Sneed.

About the Author: Christine Sneed’s story collection Portraits of a Few of the People I’ve Made Cry won the Grace Paley Prize, Ploughshares’ John C. Zacharis Prize, and was a Los Angeles Times Book Prize finalist. Her debut novel Little Known Facts won the Society of Midland Authors award for best adult fiction and was named a top ten debut novel of 2013 by Booklist. Sneed teaches at Northwestern University and the University of Illinois-Urbana-Champaign and lives in Evanston, Illinois.