Over 90% of Americans think special interest money has too much influence in American political campaigns. 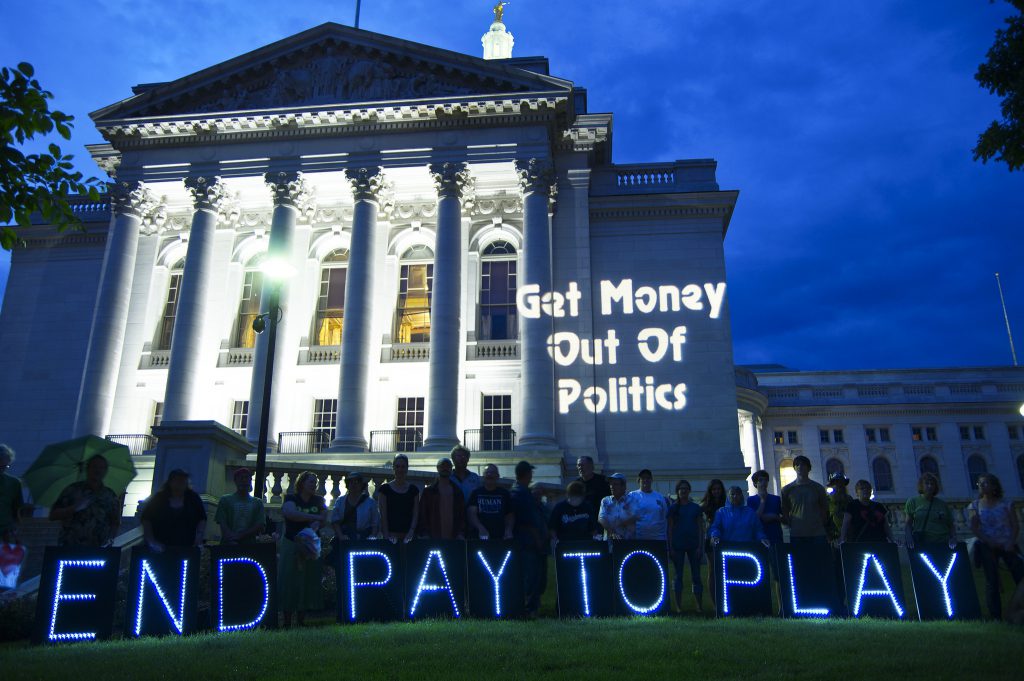 Get Money Out Of Politics. Photo courtesy of Wisconsin United To Amend.

Madison, WI (October 15, 2018) – Three recent polls show that government corruption is the top issue on the minds of voters.[1] Over 90% of Americans think special interest money has too much influence in American political campaigns.[2] It’s no surprise that Americans’ job approval rating for Congress hovers near single digits.

The non-partisan citizen-action group, Wisconsin United To Amend, contacted all 200 state Assembly and Senate candidates numerous times, via email, Facebook and phone calls, to determine their level of support for a U.S. Constitutional amendment declaring that free spending is not free speech and only actual human beings have human rights. Based on responses, the group has compiled a voter education guide with a list of 94 Anti-Corruption Candidates (http://wiuta.org/2018-anti-corruption-candidates)

Lori Hawkins, a state senate candidate from Bristol stated, “Citizens United has allowed corporations to spend unlimited funds on elections. It can be strongly argued that this is not what the framers intended when they drafted the First Amendment. We can look to our own state to find countless attacks on campaign finance legislation since 2011. Dark money groups can spend massive amounts in our elections without having to disclose their donors.”

Katherine Gaulke, a state assembly candidate from the Town of Delavan explains, “In 2015, my opponent voted to overturn a corporate contribution ban that had been in place since 1905. As your next Assemblyperson from the 32nd District, I will support AJR 53 and Wisconsin United to Amend. Let’s get dark money out of politics.”

Mike McCabe, clean government advocate and former candidate for governor, lamented the lack of attention given to this issue during candidate forums, stating “There were about 50 candidate forums leading up to the primary. Over the course of all those forums, candidates were asked more than 200 questions. Three were about money in politics. Voters are concerned about it and want to hear what can be done. Most candidates don’t want to talk about it. The media and interest groups rarely ask them to.”

Wisconsin United To Amend is a non-partisan, all volunteer organization. One volunteer, Bill Dagnon of Baraboo, expressed frustration: “Citizens in 133 Wisconsin communities have passed resolutions calling for an amendment. We need state legislators to put it on a statewide ballot, but they won’t even let the bills have a public hearing!”

Due to the efforts by hundreds of volunteers across the state, referenda and resolutions have passed in 133 communities with voter approvals as high as 91%. In total, 3.0 million people (52% of Wisconsinites) live in jurisdictions that have called for this amendment, including 77 towns and villages. Nine more communities will be on the November ballot. For more information, visit wiuta.org.