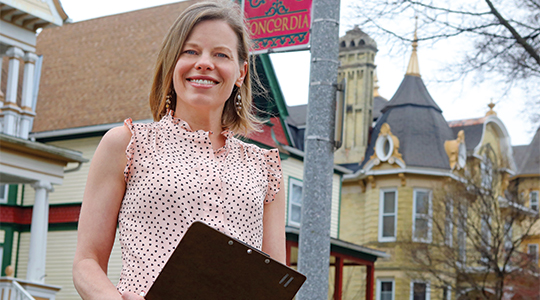 The award affords Wichowsky the opportunity to scale up the Democracy Lab, which she founded in 2015 through a Marquette Strategic Innovation Fund (now known as the Explorer Challenge) grant.

Wichowsky’s research focuses largely on political inequality. Income disparities — not only between rich and poor, but also between neighborhoods and communities — have increased dramatically over the last four decades in the United States. Her research considers the consequences of these developments for political equality and governance.

Since its inception, the Democracy Lab has worked with the Near West Side Partners to evaluate the impacts of their community outreach efforts.

In a second project and a new research focus for Wichowsky, she will research whether it is possible to develop local, collaborative governance approaches to groundwater management—which is highly localized, decentralized and not covered by the federal Clean Water Act. Specifically, the multidisciplinary project will focus on groundwater contamination in Kewaunee County, Wisconsin.

“Though our research is geographically confined to Kewaunee County, groundwater contamination is a national issue, from fracking controversies to poor septic systems,” Wichowsky said. “Through our project, we will explore who is influential in shaping policy agenda, how networks of influence develop over time, and the extent to which ordinary citizens can develop scientific and policy expertise to effect local environmental change.”

The Way Klingler Sabbatical Award is nominated annually by the Sabbatical Review Committee. The recipient receives his or her full salary, plus two additional months of summer pay and $10,000 to fund travel and expenses related to research conducted during the year-long sabbatical.