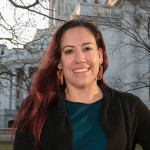 MADISON — Madison Alderwoman Arvina Martin today announced her campaign for Secretary of State, pledging to make the most of the office’s unique and valuable platform to promote civic engagement, protect the integrity of our elections, and fight back against Republicans’ unconstitutional attempts to disenfranchise tens of thousands of voters.

“Our state’s pioneering efforts to expand the franchise, provide for direct election of U.S. senators, and eliminate corruption in our government earned Wisconsin status as a ‘laboratory of democracy’ and paved the way for sweeping progressive reforms across the nation,” said Arvina Martin, the first Native American alderperson in Madison. “This legacy has been under attack for the past eight years, as Scott Walker and Republicans in the legislature have chipped away at our foundational principles of good, open government while diminishing the roles of Constitutionally-elected officials who provide needed checks and balances. I am running for Secretary of State to give people — not special interests, wealthy corporations, or connected political insiders — a voice in our democracy again.”

Republicans in Wisconsin and around the country have systematically worked for years to rig our elections in their favor with unfair maps and burdensome restrictions designed to make it harder for people to vote. Martin worked for a time as a Voter Protection Fellow for the Democratic Party of Wisconsin.

While progressives are still fighting these battles on multiple fronts, our democracy faces new challenges every day, such as the Trump administration’s attempt to politicize the U.S. census, outdated voting infrastructure, and growing concerns about corruption and outside interference in our elections.

“We need modern solutions to strengthen our democracy for generations to come,” Martin said. “As Secretary of State, I will promote civic engagement and voter participation around the state, particularly by encouraging registration of new voters, and fight to make sure that every vote counts.”

Arvina Martin has devoted her life to advocating for Wisconsin families. An enrolled member of the Ho-Chunk Nation, Arvina was born and raised in Madison, where her father, a retired public servant who served in the administrations of President George H.W. Bush and Gov. Tommy Thompson, and mother, a former Ho-Chunk legislator who has worked in health and education, instilled in Arvina a deep appreciation for the Wisconsin Idea.

Arvina currently represents Madison’s 11th aldermanic district and is the first Native American woman to be elected to the City Council. She remains a strong advocate within the Democratic Party, particularly on addressing racial disparities and protecting the voting rights of all Americans. Arvina is a graduate of Dartmouth College and has worked at the University of Wisconsin-Madison and the state Department of Transportation during her career. She has one daughter who attends the same public elementary school Arvina spent her younger years.