Lee Lessack and Johnny Rodgers recreate that magical night in Wilson Theater at Vogel Hall as part of the MC Presents series. 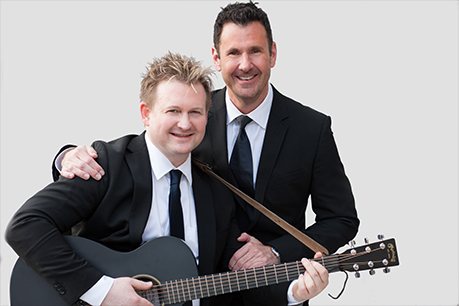 MILWAUKEE, WI (December 15, 2016)-In 1981, more than 500,000 music fans gathered in Central Park to witness a concert by the now legendary reunion of folk duo Simon & Garfunkel. On Friday, March 31, award-winning recording artists, Lee Lessack and Johnny Rodgers recreate that magical night in Wilson Theater at Vogel Hall as part of the MC Presents series. With dulcet vocals harmonizing over lilting guitar, you’ll hear all the beloved poetic masterpieces that made Simon & Garfunkel famous: “Mrs. Robinson,” “Homeward Bound,” “Scarborough Fair,” “Bridge Over Troubled Waters,” “The Sound of Silence,” and many more! Tickets go on sale this Friday, December 16 at 12:00 pm at the Marcus Center Box Office. Tickets can be purchased in person at 929 North Water Street, by phone at 414-273-7206 or online at Ticketmaster.com or MarcusCenter.org. Groups of 10 or more should call Group Sales at 414-273-7121 x210 or x213.

LEE LESSACK’s graceful Lyric baritone vocals and sophisticated, yet endearing persona have made him a shining star on the international concert scene.  Billboard Magazine calls his singing “cabaret romanticism of a high order”.

Touring extensively in the United States and Europe to sold-out performances and releasing eight albums, Lessack has proven himself both as a performer and recording artist.

Chanteur, Lessack’s concert and recording of the Great French Songbook celebrates music by Michel Legrand, Jacques Becaud and Charles Aznavour to name just a few.  Another ambitious recording, In GoodCompany was released to great acclaim.  Intimate and impeccably produced, the album beams with outstanding performances.  Lessack sings duets with music notables such as Michael Feinstein, Maureen McGovern, Amanda McBroom, Ann Hampton Callaway and Stephen Schwartz.  The recording earned a MAC and Bistro Award for Best Recording of the Year.

Among his critically acclaimed albums is a live recording of Too Marvelous for Words: The Songs of Johnny Mercer, from the famed Cinegrill in the Hollywood Roosevelt Hotel, which was chosen for the 2002 Grammy Award preliminary ballot.  His newest album, in collaboration with Johnny Rodgers is a recreation of the Simon & Garfunkel Live in Central Park concert in September, 1981.  All are available on www.lmlmusic.com.

A Philadelphia native, Lessack sharpened his acting skills at the American Academy of Dramatic Arts and then chose to pursue the concert route over Broadway.  He now resides in Los Angeles where, in 1996 he founded LML Music (www.LMLmusic.com) which has a catalog of over 100 of the country’s top live recording artists and performers.  In 2008, he began booking other artists in addition to himself. ( www.LMLmusicpresents.com)

JOHNNY RODGERS is an internationally-celebrated singer-songwriter, pianist, music ambassador, Broadway star, and recording artist who is described by Stephen Holden, from The New York Times, as an entertainer “who has show business in his bones” with “fused elements of Billy Joel, Peter Allen and Johnny Mercer.”

Johnny Rodgers has recently returned to Chicago, the place he says started it all. Since beginning his career here fifteen years ago Johnny has traveled the country and the world making music with great artists such as Billy Joel and Judy Collins and also with the unknown talents found in villages across the Middle East and South East Asia. No matter where he roams Rodgers dazzles audiences with his Americana mélange of original songs and classic favorites. Johnny tours with his band as music ambassadors for the State Department to places such as the Middle East, North Africa, Southeast Asia, the Pacific Islands and Russia. This summer, Johnny Rodgers will be touring back to Europe, this time to Minsk, Belarus. When in town, Johnny can be found playing and singing at Chicago’s own Davenport’s Piano Bar every Saturday and Sunday night; that is if he’s not off doubling as Music Director and piano man for Liza Minnelli. Johnny’s work and talent has not gone unnoticed and has earned him the New York’s Nightlife, Bistro and MAC awards for his performances at Carnegie Hall, Lincoln Center, Jazz At Lincoln Center, Oak Room at the Algonquin Hotel, Feinstein’s at Loews Regency, The Colony Hotel Palm Beach, Birdland, and other premiere clubs. His songwriting has been recognized with Billboard and ASCAP Foundation awards.

In addition to Liza Minnelli, Johnny Rodgers has performed and/or recorded with Michael Feinstein, Randy Brecker, Tom Harrell, Stephen Schwartz, Susan Werner, Dave Koz, Clint Holmes, and Ann Hampton Callaway, among others and is featured on the recordings; The Maury Yeston Songbook, Hallways: The Songs of Carol Hall, and Jule Styne In Hollywood.

Johnny is also the Music Supervisor and song co-writer of Motherhood The Musical which debuted in 2010 and continues touring regionally with growing accolades. Johnny received a Carbonell Award nomination for Best Musical Direction. He is also currently working on a series of Cabaret shows that you can catch at Davenport’s Piano Bar  and Skokie Theatre throughout the year. He encourages people to keep up to date on his adventures through his website www.johnnyrodgers.com.

Experience Relaxed, Sophisticated Fine Dining at Envoy Restaurant & Lounge, Milwaukee
Envoy, located in the iconic Ambassador Hotel, offers classic American cuisine with global influences.  Ingredients feature artisan, local and seasonal products.  Envoy offers breakfast and lunch dinner in an atmosphere that transports guests to a time when patrons “tripped the light fantastic”.  Guests of Envoy experience the legendary service that generations have come to expect from a staff that is simply “the bee’s knees”.  Envoy offers nostalgic cocktails from the hotel’s original menu, written in 1928.  In addition to half priced appetizers, Envoy Lounge’s happy hour offers buy one martini or nostalgic cocktail and receive the next at 1928’s price.  Guests who dine at Envoy are invited to enjoy complimentary parking and shuttle service to and from destinations in the downtown Milwaukee area, including the Marcus Center for the performing Arts.  Visit envoymilwaukee.com for more information and reservations.