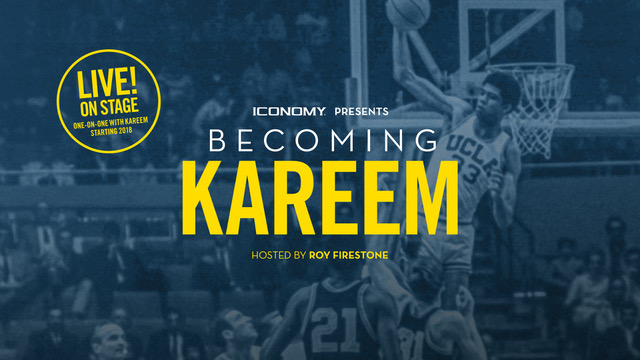 Milwaukee, WI – May 7, 2018 –Iconomy Multi-Media & Entertainment and the Marcus Center for the Performing Arts is pleased to announce the Milwaukee engagement of BECOMING KAREEM, a live on-stage performance with legendary NBA champion, NY best-selling author, and recipient of the 2016 Presidential Medal of Freedom Kareem Abdul-Jabbar, hosted by 7-time Emmy Award winning sports commentator Roy Firestone. The show will be at the Marcus Center’s Uihlein Hall on Friday, September 7 at 8:00 pm. Tickets go on sale on Friday, May 18 at 12:00 pm at the Marcus Center Box Office and can be purchased in person at 929 North Water Street, Downtown Milwaukee, online at MarcusCenter.org or Ticketmaster.com or by phone 414-273-7206. Groups 10 or more SAVE! and should call Group Sales at 414-273-7121 x 210 or 213.

BECOMING KAREEM Live On-Stage, based on the best-selling book by the same name, is an exciting new multimedia conversation before a live audience, featuring one-on-one candid discussions about Kareem Abdul-Jabbar’s storied basketball career and his reflections on the people and places that impacted his view of life.

“For forty years, I’ve had the privilege of covering the evolving career of Kareem Abdul-Jabbar —from elite basketball player to eloquent author and engaged Social Justice Warrior,” says Firestone. “I realized in knowing and watching him, he needs a unique way of telling his remarkable story in a format that is both in-depth and intimate. It is a great honor to host Kareem in this brand new multimedia interview format.”

BECOMING KAREEM will look back at the life of this extraordinary American who rose from a child of the housing projects in New York City to become an internationally known athlete, best-selling author, philanthropist, diplomat, political activist and recipient of the Presidential Medal of Freedom.

Audiences will be captivated as they delve into topics that interest this modern Renaissance man… his love of music, his writing, his commitment to social justice and his thoughts on making the American Dream available to everyone. During the show, Kareem will talk about the seven most influential mentors in his life, including his UCLA Coach John Wooden, who became his lifelong friend; basketball legend Wilt Chamberlain, who exposed the young high school star to all the material rewards that fame could bring; Muhammad Ali who inspired the young college student to become more politically active; international martial arts sensation Bruce Lee, who taught Kareem about balance in the mind and body; and his life-altering meeting with Dr. Martin Luther King, Jr. while Kareem was still in high school.

ABOUT THE MARCUS CENTER FOR THE PERFORMING ARTS

Established in 1969, the Marcus Center for the Performing Arts is the premier performing arts community gathering space in Southeastern Wisconsin. As the Marcus Center moves into its 49th year, it continues to build bridges between diverse members of our community through high-quality arts entertainment in the region and the state. The touring Broadway series, sponsored by Associated Bank, is recognized as bringing the best of Broadway entertainment to Milwaukee for the past 20 years and provides opportunities to educate, entertain and engage audiences. The Marcus Center is also the home to the Milwaukee Symphony, Milwaukee Ballet, Florentine Opera, First Stage plus a variety of other important community and family events throughout the year. For more information about events visit the Marcus Center website at www.MarcusCenter.org.  The Marcus Center is a private non-profit 501(c) 3 corporation and is a dedicated veterans memorial in Milwaukee.