Mr. Tate will begin his work as Parole Commission chairperson on June 3, 2019. 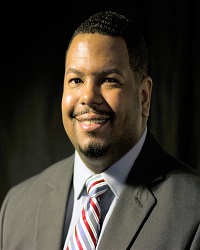 John Tate II. Photo from the City of Racine.

MADISON — Gov. Tony Evers today announced his appointment of John Tate II to serve as chairperson of the Parole Commission.

Mr. Tate, a lifelong resident of Racine, has been a 3rd District Alderman in Racine since 2017 and holds a bachelor’s degree in Psychology and a master’s degree in Social Work. He has professional experience as a social worker, case worker and mental healthcare provider within the criminal justice system and in community health settings.

“Improving our parole system is an important part of reforming our criminal justice system and eliminating the racial disparities that have led to increased incarceration rates for people of color,” said. Gov. Evers. “I know that John Tate II will be a strong advocate for the change we need to ensure our criminal justice system treats everyone fairly and focuses on rehabilitation. We can improve public safety and empower returning citizens at the same time.”

The appointment is subject to confirmation by the Senate. Mr. Tate will begin his work as Parole Commission chairperson on June 3, 2019.

This appointment fills a vacancy created by the retirement of Tim Baxter on Jan. 3, 2020.