Fitzgerald Refuses to Debate, Prefers to do Nothing as Usual

Brookfield, WI – Scott Fitzgerald is setting a dangerous precedent. The Fifth Congressional District seat is open in this election, but Fitzgerald will not consider a debate with Democrat Tom Palzewicz. He will not return a phone call. Fitzgerald is not interested in the democratic process, he prefers to do nothing as usual.

When Governor Tony Evers called the full-time Wisconsin Legislature back into session, the Republican majority complied in a “session”, as they graveled in and graveled out, doing absolutely nothing.  Fitzgerald, along with Assembly Speaker Robin Vos, did what they always do—nothing.

Fitzgerald, Vos, has dominated the political landscape in Wisconsin for several years, from pushing through Act 10, to the recent Supreme Court action cutting off the Badger Bounceback Plan and the efforts by Evers to halt the spread of Covid-19. Rather than legislating, Republicans seem to be more comfortable with litigating. Along the way, Fitzgerald and Vos have made Wisconsin one of the most gerrymandered states in the nation.

“Wisconsin has a full-time legislature and they don’t even meet,” said Palzewicz. “There is no democratic process in Wisconsin. It is an authoritarian approach to governing, just ignore the public and do what you want.  Fitzgerald has used his power to gerrymander his district to heavily favor his candidacy, he doesn’t go to work, and he won’t debate. He gets paid full time wages for not working.

“He’s counting on his heavily red district to automatically vote Republican, without considering the issues, without any public exchange of ideas or positions. He wants to ride to Washington on the coattails of President Trump, never having to stand up to scrutiny or challenge. He is counting on people not paying attention. Becoming a Congressman is not an entitlement, it’s a privilege.  People expect their elected representatives to go to work for the collective good, not just for personal gain or party.”

Fitzgerald’s unwillingness to debate follows the model of the retiring Jim Sensenbrenner, who never debated an opponent. Sensenbrenner would hold town hall meetings, which were not listening sessions, but just personal appearances to advance his opinions. For over 40 years, Sensenbrenner never changed his approach.

“Authoritarianism does not allow for the open exchange of ideas,” said Palzewicz. “Authoritarianism is the antithesis of democracy. Fitzgerald wants to support the current regime in Washington and not allow the Congress to act, the courts to rule. He will not support our institutions, such as the CIA, the FBI, the CDC, because Trump does not believe in them. Trump says that anyone who does not stand with him is anti-American and that he and he alone has all the answers for the country. I will fight for the right of people to be heard and that means listening and really hearing them.

“It’s time for Americans to embrace what democracy is all about and not be fooled by the promises of those who have no intention of keeping them. America is made great by its people being informed, active and not allowing authoritarianism to limit their choices. It’s time to give America back to Americans.”

Palzewicz welcomes any opportunity to debate the issues of the Fifth District.

City On Pace to Break Homicide Record by Corri Hess 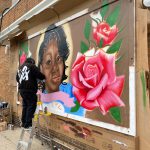 Protest Shuts Down I-94 Freeway by Isiah Holmes