Washington, D.C.—Today, Congressman Jim Sensenbrenner (WI-05) participated in a House Judiciary Committee hearing titled “Challenges and Solutions in the Opioid Abuse Crisis.” Among the expert panelists that testified before the committee were acting Administrator of the Drug Enforcement Administration, Robert Patterson, and Dr. Timothy Westlake of Hartland, WI. 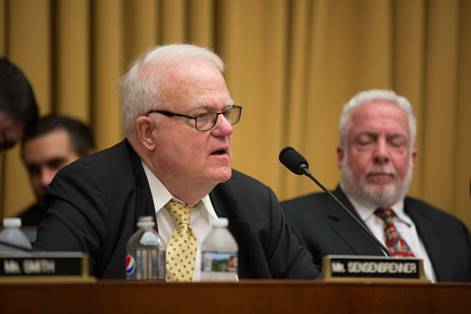 Rep. Sensenbrenner: “In addition to treating addiction, empowering law enforcement agents to stop the proliferation of dangerous opioids and synthetic opioids, like fentanyl and its analogues, is an important step to ending the opioid epidemic. This hearing gave members of the committee an opportunity to hear directly from subject matter experts about the next steps Congress should take to combat this public health crisis, including my Stopping Overdoses of Fentanyl Analogues Act.

I’m grateful to all of the witnesses, especially Dr. Timothy Westlake, who has been instrumental in my work on this issue. His expertise and passion have proven invaluable as we try to end the scourge of the opioid epidemic.”

Dr. Timothy Westlake is an emergency medicine physician at a practice based in Oconomowoc, WI. He serves on Wisconsin’s Medical Examining Board and Controlled Substances Board and has nearly 20 years of practice in southeastern Wisconsin.

Dr. Westlake provided the following opening statement during the hearing:

“In my role on the Wisconsin Medical Examining and Controlled Substance Boards, I became the physician architect of the state’s prescription opioid reform strategy and an expert on opioid scheduling.

As an emergency physician on the front lines of the opioid battlefield for the past 20 years, I’ve witnessed more tragedy than I care to recall. Like you, I am laser focused on what can be done to stop the senseless loss of life. It’s why I am grateful for this opportunity to talk with you today and to share a legislative solution that’s actually working in Wisconsin right now.

But first, a brief story about a young man named Archie Badura. Every Sunday, we sat next to Archie and his family in church, where he was an altar server alongside my daughters. Archie got hooked on marijuana first, then prescription opioid pills, heroin followed shortly, and eventually fentanyl – a tragically all too familiar slide. The last time I saw Archie alive, he was my patient in the ER. I had to resuscitate him with Narcan after he overdosed on fentanyl. Before discharging him, we pulled out a body bag, unzipped it, and pretended to fit him for it. It was a wake-up call. Archie became serious about getting clean and started following recovery principles. He told his family he was going to beat the odds and not end up in a body bag. He stayed drug-free for six months after this. Sadly, he eventually relapsed on fentanyl and died at age 19. His mom, my friend Lauri, vividly remembers Archie being zipped into a body bag – identical to the one she had seen me showing him months earlier. In his honor, Lauri founded SOFA – Saving Others For Archie – and now helps others who are desperately trying to help their loved ones.

It is incontrovertible that the increased availability of prescription opioids has fueled the epidemic. As a medical regulator, I have spent countless hours working to identify and implement best practices. For starters, we need more judicious prescribing practices. We are doing this in Wisconsin – not with top-down mandates, but through education and partnerships within the medical community. In my written testimony, I provide more detail about the kind of cutting-edge Prescription Drug Monitoring Program reforms and educational reforms that we have put into place.

The fact is that the lion’s share of medical regulation does and should occur at the state, medical licensing board, and health system levels. Where Congress can and has – and can continue to be helpful – is in law enforcement and in providing flexible funding to the states themselves to invest in communities where the dollars are most needed. When government intervenes too much, for example, with the development of the pain scale and pain as the fifth vital sign, there is too much room for unintended consequences.

By far, the deadliest front in the opioid war is the danger posed by the creation of fentanyl-related substances. These deaths now surpass heroin deaths. The lethal dose of fentanyl is 2mg, which means that there could be enough fentanyl in this 4 lb box to kill more than 900,000 people – which would be more than the entire population of D.C. In fact, fentanyl variants and related substances are so deadly, they can be used – and are classified – as chemical weapons. These are not just drugs, they are actually considered weapons of mass destruction.

The “bad” guys use loopholes in the existing scheduling laws to create new legal fentanyl variants. These untested chemicals are then produced – mostly in China – and introduced into the opioid supply. As our prescription opioid reforms take effect and the medical community returns to more judicious prescribing practices, the market for counterfeit pills will continue to explode. Most illicit opioid users have no idea what they’re consuming. With the advent of counterfeit pill production, they believe they’re ingesting a “safe” trade-name manufactured pill when actually it’s a fentanyl-related counterfeit substance. These pills can be alarmingly more strong than what they are purported to be, up to hundreds of times stronger. The singer Prince died from a counterfeit Vicodin pill ingestion that was actually fentanyl.

During 2016, in one weekend, there were 12 deaths in Milwaukee from counterfeit pills that contained cyclopropyl fentanyl, which at the time was not controlled and could be bought legally on the Internet.

We saw this coming in Wisconsin years ago. We worked closely with the DEA to get ahead of it. We created and enacted novel scheduling language now being modeled nationally. “Act 60” – or the SOFA Act (Stopping Overdoses of Fentanyl Analogs in homage to Saving Others For Archie). It controls, by structure, all likely and possible bioactive chemical fentanyl modifications. This novel, catch-all legislative language allows us to schedule proactively and not wait for loved ones to die before we can schedule each newly modified fentanyl variant. So instead of playing whack-a-mole with the variants as people die as we discover them, it unplugs the entire fentanyl machine.

The week after Wisconsin enacted SOFA, the DEA published the identical scheduling language in the Federal Register as the method of federal temporary scheduling. Chemists around the world, and in China, must be paying attention because since that announcement six months ago, there have been no new fentanyl variants found. In the prior two years, there had found and scheduled 17 new fentanyls, representing hundreds of deaths.

But the language needs to be written into the U.S. code, as the DEA Administrator said, for the best permanent scheduling solutions. Many thanks to Mr. Sensenbrenner and Senator Ron Johnson, who have the federal SOFA Act. Thank you for their leadership on that.

When asked how often I see fentanyl overdoses, the answer is tragically far too often. The last shift I worked was two days ago – on Sunday. As I was preparing my testimony, I was interrupted to go resuscitate a fentanyl overdose.

It’s for this reason, I urge you to pass legislation and make it so. Thank you for your time and consideration, and I look forward to answering any questions.”

You can read the full text of the SOFA Act here.