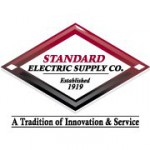 “We are extremely excited to be in our newly renovated facility. It will allow us to better provide service and technical support to customers in the Milwaukee area and throughout Southeastern Wisconsin. This building expansion allows us the space to potentially double the size of the company and ensure that we can stay and do business in the City of Milwaukee for years to come,” stated Larry Stern, President.

Standard Electric Supply Co. has been doing business in Milwaukee for 98 years. The expansion came 30 years after its original move to the Menomonee Valley from downtown Milwaukee to make room for the first Bradley Center in 1986. The expansion project led by Madisen Maher Architects and Moore Construction was completed in March of 2017.

Standard Electric Supply Co. is a third generation, family-owned company founded in 1919 and is based in Milwaukee, Wisconsin. Standard Electric is a distributor of electrical and automation products that has 15 locations throughout Wisconsin, Illinois and Indiana, employing 180 associates. Its 2016 sales totaled over $88 million.