Street Angels defends it; downtown business leader calls it 'enabling' such behavior, then walks back comment.

By Devin Blake, Milwaukee Neighborhood News Service - Jan 18th, 2023 11:56 am
Get a daily rundown of the top stories on Urban Milwaukee 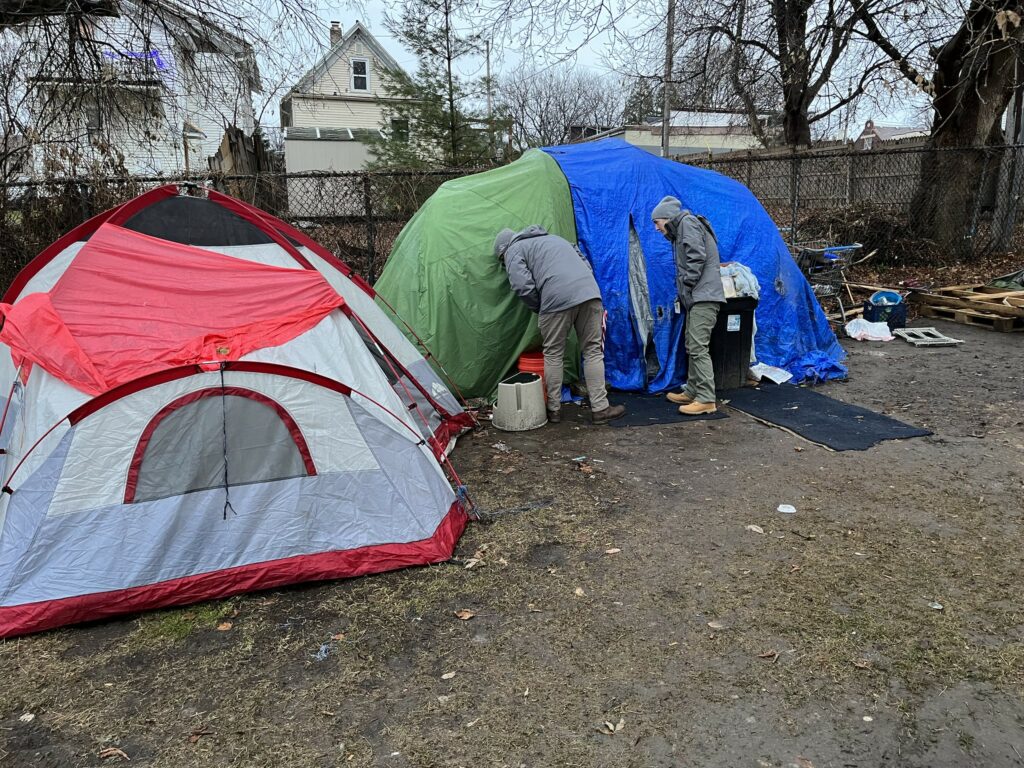 Serious disagreements have been reported between two different groups about how to best assist people experiencing homelessness in MacArthur Square.

But agreement over what to do – and why it should be done – has recently emerged.

The debate has broad implications for how homelessness in our midst is effectively addressed – not just in MacArthur Square but throughout the city. Key in this debate is sweeping recognition of the value of a “housing first” approach.

The two groups in question have been the Milwaukee Downtown, Business Improvement District #21 (BID #21) and Street Angels Milwaukee Outreach.

BIDs are organizations funded by business and property owners to promote their interests and provide services that benefit the group. In Milwaukee, there are 31 BIDs, each within their own boundaries.

In the case of BID #21, the boundaries are within downtown, roughly bordered by East Pleasant Street on the north and West St. Paul Avenue on the south; North 11th Street on the west and North Prospect Avenue on the east – an area that includes MacArthur Square, 841 N. James Lovell St.

Street Angels is a nonprofit organization that reaches out to people living on the street throughout the city, including in MacArthur Square, and provides food, hygiene items and outdoor gear.

A tent is one such piece of gear.

After a rise in the number of people living in tents in MacArthur Square, Beth Weirick, CEO of BID #21, told the Milwaukee Journal Sentinel in October that Street Angels is responsible for the rise, as tents make people less willing to accept shelter or housing.

Jan Wilberg, board president of Street Angels, responded to Weirick’s claims by disputing the idea that tents somehow “enable” homelessness. Street Angels hands out tents, she said, because people often have no other option but to be outside.

Several weeks later, in support of Street Angel’s position, Wilberg posted to Facebook the results of an informal survey about the relationship between having a tent and one’s willingness to accept shelter or housing.

“One thing is sure,” Wilberg wrote, “tents protect people.”

There now appears to be more common ground.

“Clearly, there are organizations, like Street Angels, who are focused on how we make being outside humane for individuals,” Weirick told NNS recently.

“What I have stated,” Weirick said, “is that where we like to see our own (BID #21) resources being used is to fund permanent, sustainable housing solutions, and saying something like that can be misinterpreted as saying ‘don’t buy people tents.’”

The difference here is simply more a matter of approach, Weirick said. “I can tell you everyone has a different approach of how they care for unsheltered people. Street Angels is authentically committed to ending homelessness – everybody leverages resources in different ways.”

And while the encampments at MacArthur Square became a flashpoint of sorts for the debate about homelessness in the city, giving way to related debates at Common Council committee meetings about the provision of port-a-potties for unsheltered people, the issue is not limited to this part of the city.

As Shelly Sarasin, co-founder and director of Street Angels, said, “There are no borders to homelessness.”

She and her staff have handed out or seen tents throughout the county, as far north as the intersection of North 76th Street and Good Hope Road to as far south as Oak Creek.

Another point of agreement that has emerged between BID #21 and Street Angels is on the question of the availability of shelter and housing.

“We recognize that the minute somebody becomes homeless, there’s not necessarily shelter or an apartment for them,” said Weirick. This is a fact that motivates much of the work of Street Angels.

Sarasin said homelessness is not caused by “providing tents” but is simply “a result of the lack of affordable housing in Milwaukee.”

“There are many people who need housing, and shelter, but there’s just not enough beds for everyone who needs them,” Sarasin said.

In the case of the people at MacArthur Square, the fact that there are still many people in tents, despite public scrutiny and engagement by the Milwaukee County Department of Health and Human Services, Housing Division, further supports this claim, according to Sherrie Tussler, executive director of Hunger Task Force, a food bank and food advocacy organization.

The Hunger Task Force paid for and organized the placement of port-a-potties at MacArthur Square.

Data provided by IMPACT, the parent organization of IMPACT 211, which connects people in need to resources, also supports the claim there are not enough places for people to go.

From Jan. 1, 2022, and Dec. 9, 2022, people were housed, on average, within 45 days of receiving a housing voucher. However, the time between a person becoming homeless and receiving a voucher was significantly longer. Seventy-five percent of people received a voucher over the course of their first year of experiencing homelessness, “with the majority of those receiving a voucher within six months of their first date of homelessness,” Emily Kenney, IMPACT’s systems change director, said in an email. Twenty-five percent of people received a voucher after a year or longer.

Statements by Eric Collins-Dyke, assistant administrator of supportive housing and homeless services at the Housing Division, also support the claim there is not enough housing for people who want it.

During a Public Safety and Health Committee meeting on Dec. 1, he said, “We need more housing. People want housing – people are not refusing permanent housing.”

For those who are offered shelter but do, indeed, decline it, there is yet more overlap between BID #21 and Street Angels about why people make this choice.

Shelter options, Weirick said, do not always fully accommodate the wide range of needs people experiencing homelessness can have.

“I think that from what our team learned from citizens on the street who are not sheltered is – we hear a little of everything: ‘I don’t want to stay in this shelter because I have to be sober.’ ‘I don’t want to stay there because my partner cannot come with me.’ ‘I cannot bring my dog,’ ” Weirick said.

Sarasin, during the Dec. 1 committee meeting, also cited having a pet or a partner as reasons why people sometimes decline shelter and added that “previous negative experiences” and “trauma” in shelter settings are other reasons.

As Tussler said, “It’s difficult for anyone to stay in congregant settings. … There are a lot of people who experience a feeling of anxiousness or fear when in crowded spaces with other people.”

Collins-Dyke told Public Safety and Health Committee members much the same: “I think when you talk about spaces that may be temporary in nature, that could be crowded in a certain context, it sometimes can exacerbate mental health issues, other issues related to that, where people are more comfortable in their own private setting on the street.”

Perhaps the deepest point of agreement among groups involved in addressing homelessness, though, is what the ultimate goal is: To help get people into housing using the “housing first” model.

“Housing first” is both a belief and a practice. It holds that housing is an end unto itself as well as a tool that aids in stabilizing a person’s life overall, helping them effectively address mental health difficulties, substance abuse and other challenges that accompany homelessness.

Officials and entities who oversee the budget or offer  services for people experiencing homelessness have, publicly and in writing, endorsed a ‘housing first’ approach as well.

“We are not looking for division,” Weirick said. “How do we leverage all of these resources and groups to accomplish what we all want, which is to end chronic homelessness.”

Ways you can help

Those interested in donating toward tents and other items, can go to the website for Street Angels. Volunteer opportunities are also available.

Should we provide tents to people living outside? A public debate takes a turn. was originally published by the Milwaukee Neighborhood News Service.