By Sarah Lehr, Wisconsin Public Radio - Jan 12th, 2023 05:48 pm
Get a daily rundown of the top stories on Urban Milwaukee 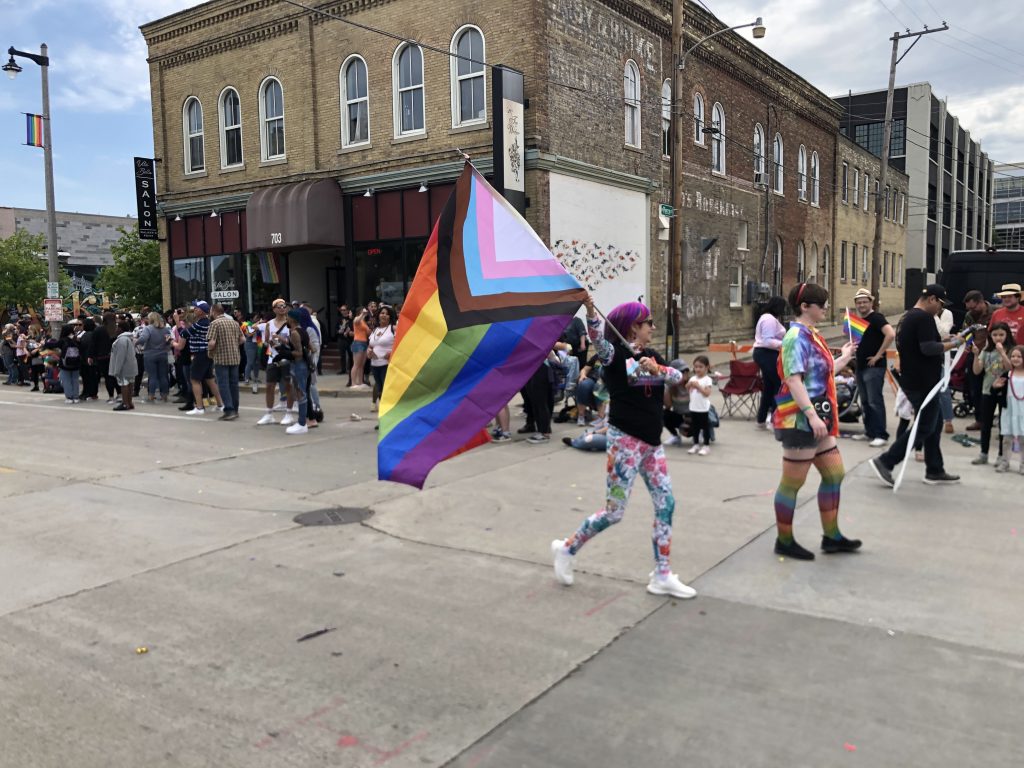 The Progress Pride flag being carried in the 2022 Milwaukee Pride Parade. Photo by Dave Reid.

The practice is widely discredited by medical and psychological professionals. A state licensing board — called the Marriage and Family Therapy, Professional Counseling, and Social Work Examining Board — adopted rules to ban it in 2020.

But in 2021, Republican lawmakers on the Joint Committee for Review of Administrative Rules voted to let licensed therapists carry out conversion therapy by suspending the rule that bans it. Their action briefly lapsed in December, but Thursday’s 6-4 vote once again lifts the ban on a temporary basis.

The now-suspended licensing rules prohibited “Employing or promoting any intervention or method that has the purpose of attempting to change a person’s sexual orientation or gender identity, including attempting to change behaviors or expressions of self or to reduce sexual or romantic attractions or feelings toward individuals of the same gender.” All four Democrats on the committee voted to keep the conversion therapy ban in place.

Among them was state Sen. Chris Larson, D-Milwaukee, who accused Republicans of trying to “short-circuit the process” by handling it through committee.

“I don’t think that this is the role of this committee, nor the Legislature to micromanage what we think is professional conduct for people who want to engage in something so vile and so detestable as to try under the guise of professionalism, to bully our youth and bully other people and just saying that you need to you need to pray the gay away,” Larson said.

But the committee’s Republican Vice Chair Rep. Adam Neylon of Pewaukee asserted Thursday’s hearing wasn’t actually a debate about the “merits” of conversion therapy. Instead, he said the issue was whether the state’s examining board had overstepped its authority.

“That is a question for the Legislature as it is public policy and deals with speech issues,” Neylon said.

Republican lawmakers previously introduced a bill that would have protected conversion therapy on a more permanent basis, but that proposal didn’t make it out of committee. Protecting the practice through a temporary rules change instead of by passing a law allows Republicans to avoid the likelihood of a veto from Democratic Gov. Tony Evers.

Matthew Shurka, an advocate with the National Center for Lesbian Rights, told the committee he was subject to conversion therapy when he came out as gay at age 16 in suburban New York. Shurka said his parents trusted a licensed professional, but that the therapist subjected him to damaging so-called treatment, including telling Shurka not to talk to his mother and his sister for three years because of the therapist’s belief that too much female influence had caused Shurka to be gay.

“Because I’m being accused of a mental illness, as diagnosed by a professional, I don’t have the power or the authority to question him or even understand this,” Shurka said. “What conversion therapy did to myself and my entire family is it broke my entire family apart.”

Twenty states and the District of Columbia ban conversion therapy on minors, according to the Movement Advancement Project, an organization that supports LGBT+ rights.

Wisconsin’s Democratic legislators introduced their own bills in 2021 to ban conversion on minors, but those proposals also died in committee.