By Hope Kirwan, Wisconsin Public Radio - Sep 22nd, 2022 12:52 pm
Get a daily rundown of the top stories on Urban Milwaukee 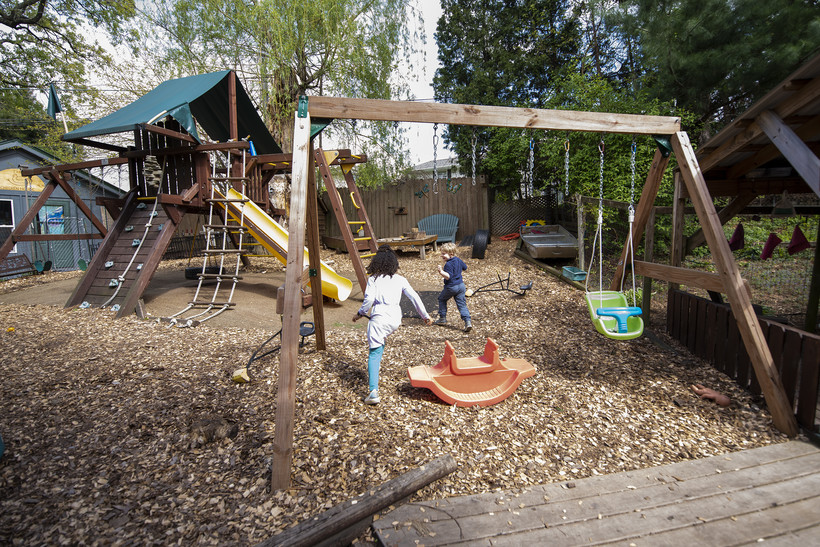 Children run to play on playground equipment at Sunshine Family Daycare on Monday, May 10, 2021, in Madison, Wis. Angela Major/WPR

As Wisconsin employers continue to struggle to recruit and retain workers, state officials hope a one-year grant program will show businesses that making child care a benefit for their employees is a good investment.

The state Department of Children and Families announced 88 more businesses across the state will be receiving a grant from their Partner Up! program. The $10 million grant program — funded by the federal American Rescue Plan Act — will allow employers to cover the cost of childcare for their employees’ children for one year.

The program was first announced in February as part of a larger effort by the agency to build partnerships between employers and child care providers. More than 100 businesses were awarded a grant in the first round announced at the end of May.

DCF Secretary Emilie Amundson said many employers she’s talked to in the state are interested in providing child care benefits. But she said they’re looking for more security before offering it as a benefit.

“What we’re hoping is that this pilot program provides a little bit of data for the state of Wisconsin to say, ‘This is something that works,'” Amundson said during a Wednesday press conference in La Crosse.

“Child care is the work that allows other work to happen. And that’s why it’s critical that our economy and communities lean into the conversation around child care,” Amundson said.

Amundson said the long-term goal would be to create a model where families, businesses and the state all contribute to the cost of child care.

“We think it’ll make it a better idea for potential state funding moving forward. So that’s the real goal, is to have a system that braids together the caregivers’ responsibility with the employers responsibility and the state,” she said.

Aptiv, a disability and services support organization in La Crosse, is one of the employers who received a grant. CEO Jenny Felty said the funding will allow them to cover the cost of child care for 20 of their employees, some of whom they expect will come from the several open positions they’re currently working to fill. She said the grant will cover 75 percent of the cost, while Aptiv will pay for the remaining 25 percent.

“Caregiving jobs in general right now are very challenging to hire for, and so we are looking for any incentive that might give us some sort of advantage to get employees in here to do this really needed and critical work,” Felty said. “To pay for somebody’s entire child care expenses is just an incredible benefit that the employees who do receive it are just so grateful, because it’s a huge burden off of their shoulders.”

Hickey said one Aptiv employee who is receiving free child care told him they plan to use the money they save on “Food, clothing and saving for (their child’s) college fund.” He said a child care provider that’s benefiting from one of the grants reported being able to raise wages for their teachers, something they hope will help their own business recruit new staff and expand the number of children they can take.

“To me, Partner Up! is an example of how business, families with young children and the child care industry can benefit with new innovative investments and how we can move child care forward in the state,” Hickey said.