What to Know About Monkeypox

National public health emergency declared in response to outbreak of the virus. 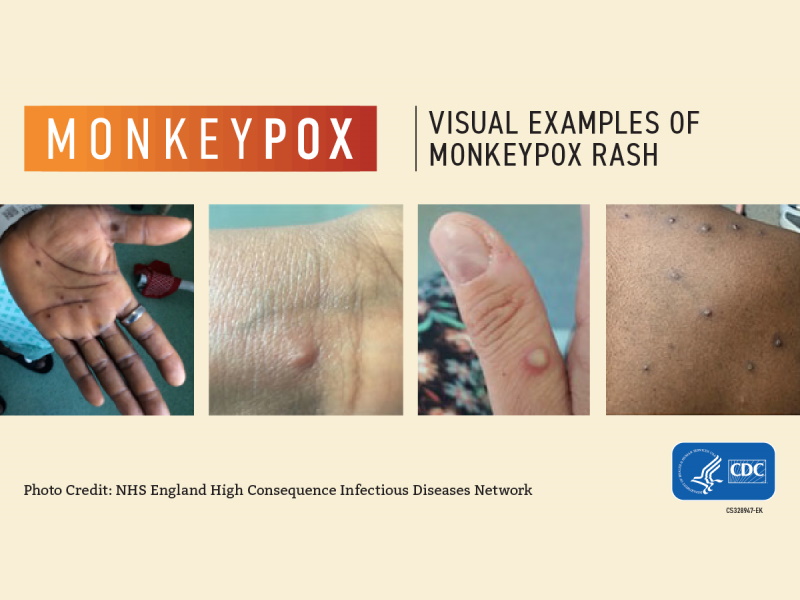 With monkeypox virus infections are rising throughout the U.S., President Joe Biden’ administration on Thursday declared the outbreak a public health emergency.

The announcement comes as Milwaukee sees a slight increase in cases, following the first identified case in a Milwaukee resident on July 9. The Milwaukee Health Department (MHD) on Aug. 3 reported two confirmed cases in the city, with 22 more across the state of Wisconsin.

Monkeypox is a virus belonging to the same family as smallpox, but is generally less severe and transmissible.

The virus is not new to the U.S. or even Wisconsin. In fact, the state was the epicenter of a 2003 outbreak, reporting 39 of the 71 confirmed cases in the U.S. at the time.

Monkeypox is spread through prolonged, skin-to-skin contact with lesions, body fluids or respiratory droplets. Though less likely, it may also spread through bedding, towels or clothing from a sick person.

A common misconception is that monkeypox is solely a sexually transmitted infection (STI). While sexual activity poses a risk for transmission, the virus is also transmitted through non-sexual contact.

Once infected, it may take up take up to 21 days to develop symptoms, which in most cases involve flu-like symptoms and swollen lymph nodes accompanied by a painful rash. Most recent cases see the rash, comprised of blister-like vesicles, concentrated in the area where infection occurred, said Dr. Ben Weston,  chief health policy advisor for Milwaukee County.

Testing is in place, he added, and involves collecting a swab sample from one of the vesicles.

The infection typically lasts for two to four weeks, according to the U.S. Centers for Disease Control and Prevention, and is contagious until the rash has fully healed.

The MHD urges anyone who has been exposed or is experiencing symptoms of monkeypox to contact a healthcare provider immediately.

Two vaccines, ACAM2000 and Jynneos, have been developed to prevent the infection. The latter first came about in the 1970s, said Weston, and is the more desirable option of the two.

Jynneos, a two-dose regimen administered 28 days apart, is FDA-approved for individuals 18 years and older. Side effects from the vaccine can include arm soreness and an immune response for up to 24 hours, Weston said.

Increased demand for the drug, which is manufactured at a single site in Denmark, is delaying widespread distribution, Weston said.

On Aug. 3, Milwaukee received 200 doses of the JYNNEOS vaccine, according to a press release. The doses were distributed to at-risk populations who live or work in Wisconsin.

Those populations include men who have sex with men and have multiple sexual partners, individuals who were exposed to monkeypox via skin-to-skin contact and people who attended an event where there was a known monkeypox exposure within the past two weeks.

All vaccine appointments are currently filled, and it is unclear when Milwaukee will receive additional doses.

Unlike COVID-19, infection is unlikely to result from brief, casual encounters such as brushing against someone at the grocery store or touching a door handle.

Rather, the virus tends to spread via prolonged respiratory exposure and skin-to-skin contact, Weston said. Respiratory droplets as well as fluid released from the rash itself can transmit the virus. Scientists are still researching whether the infection can spread through other bodily fluids or from an asymptomatic person.

Weston explained the risk in relation to COVID-19: when community rates of infection are high, moderate-risk activities like gathering with friends or going to the grocery store carry a higher risk than usual.

“That prevalence of disease makes a big difference for how much spread there is in the community,” he said.

Areas like college dorms, where individuals are more likely to have intimate contact, would be higher risk than, say, daycare centers where there is casual contact between adults and children.

Weston warned against stigmatizing the disease or dismissing it as affecting only a singular demographic.

At this point, he said, the virus mainly affects men who have sex with other men and have multiple partners, but “it’s important to remember that there’s nothing about that specific population that makes them susceptible to monkeypox.”

While it’s critical to talk to men within that population and make sure they know that they are a higher risk group right now, “we have to be careful, number one, not to stigmatize a group,” he said, “and number two, to remember that there’s nothing biologically different going on there and anybody can get this virus.”