But asking to pause the case until April because their lawyer is being suspended. 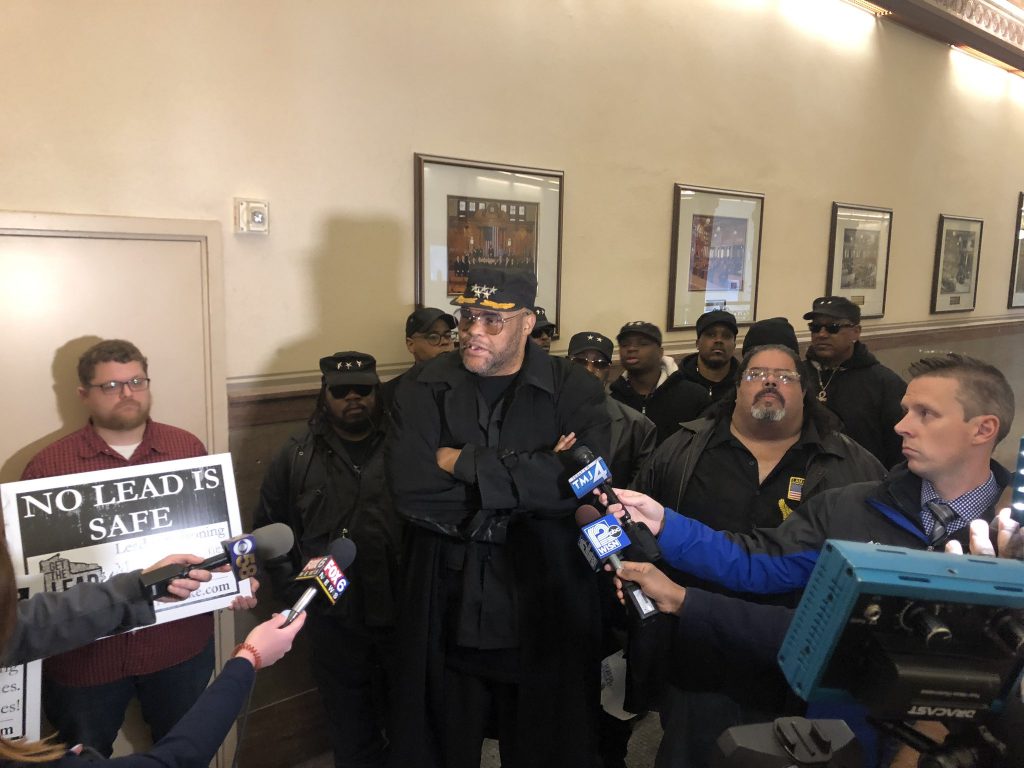 King Rick addresses the press outside the Common Council chamber in 2019. Photo by Jeramey Jannene.

There are at least two votes Acting Mayor Cavalier Johnson can write off in his quest to get the job permanently.

Johnson, related to his actions as common council president, is being sued by Original Black Panthers leader Darryl Farmer (who goes by King Rick) and Brown Berets leader Walter Garron.

They allege that on Oct. 16 during a town hall meeting at Redemption Lutheran Church, 5641 N. 68th St., Johnson ordered two Milwaukee Police Department officers at the meeting to deny their entry. The complaint, filed in federal court, says they were joined by up to 25 total members of their organizations. Activist Robert Miranda was with the group.

Farmer posted a video on Facebook of the group interrupting the town hall meeting before they were asked to leave.

The complaint says Farmer and Garron, with members of each respective group, “sought to gain entry and to participate in said Town Hall meeting to voice their concerns and to listen to Defendant Johnson’s proposals to remediate problems experienced by minority groups, Latino and African Americans, living in the inner city of Milwaukee and experiencing extreme poverty, landlord/tenant problems, discrimination and mistreatment by some members of the City of Milwaukee Police Department.”

But the day before they filed the complaint on Dec. 15, Farmer interrupted the Common Council meeting by shouting. Pointing around the room, Farmer repeatedly said “I’m going to sue you.” Alderman Russell W. Stamper, II called for him to be removed, as did Johnson.

Get a daily rundown of the top stories on Urban Milwaukee
“If you arrest me you are going to have a problem,” said Farmer. From the dais across the room, Johnson said Farmer wasn’t being arrested, just asked to leave. With two associates, Farmer left at the repeated request of the police officers, but not without mentioning the town hall meeting and calling an unidentified council member a “hypocrite” and “idiot.”

Urban Milwaukee captured much of the interaction on video.

The Black Panthers, at Farmer’s direction, have disrupted the council’s meetings and other city events multiple times in recent years.

Johnson, in a press release sent to his constituents, acknowledges there was an issue at the October meeting. “I know that unfortunately we had a minor interruption during the meeting and some of you were unable to have your questions or comments addressed.”

Farmer and Garron’s complaint was filed by attorney Walter Stern of Kenosha. It also names the City of Milwaukee and two unidentified police officers as defendants.

But there is at least one problem with the plaintiffs’ case: their attorney.

On Monday the plaintiffs filed a request to delay any action until at least April 1 because Stern will be suspended from the practice of law from Jan. 4 through March 5. “The clients have been advised and intend to continue the case with Walter W. Stern III as attorney once the suspension has ended,” wrote Stern.

The Office of Lawyer Regulation‘s website does not offer an explanation of Stern’s suspension and says his license is in good standing. But it does have documentation on two prior incidents, including one where Stern was suspended for two years.

Licensed to practice law since 1974, Stern was found guilty of money laundering by a federal jury in 2012. He was suspended for two years in 2013 and reinstated in 2016.

Stern was publicly reprimanded in 1992 for naming another attorney as an expert witness without their knowledge, disrespecting the courts and threatening a client’s doctor in writing.

Included in the 2013 suspension documentation are multiple notes about Stern being privately reprimanded three times for various personal and professional transgressions.

The full complaint, minus a referenced “Exhibit B” that doesn’t appear in the federal PACER system and therefore wasn’t included, is available on Urban Milwaukee.

Johnson did not return a request for comment by the time of publication.