Nor whether additional funding for investigation will be needed. ‘We don’t know.’

By Laurel White, Wisconsin Public Radio - Dec 15th, 2021 10:42 am
Get a daily rundown of the top stories on Urban Milwaukee 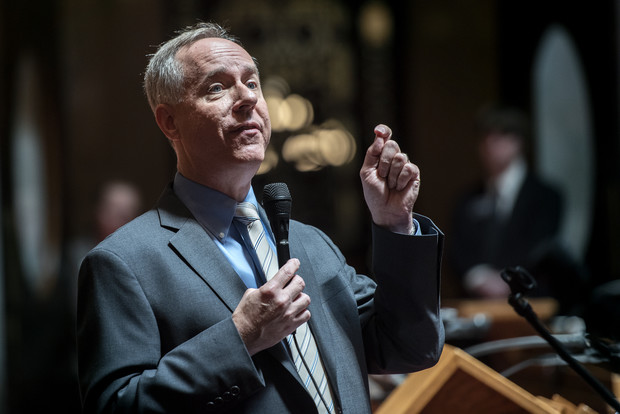 Assembly Speaker Robin Vos speaks at the front of the chamber Wednesday, June 9, 2021, at the Wisconsin State Capitol in Madison, Wis. Angela Major/WPR

Wisconsin Assembly Speaker Robin Vos, R-Rochester, said Tuesday he doesn’t know how much longer an investigation he spearheaded into the 2020 election will go on, or whether it may need more than its initial, $680,000 taxpayer-funded budget to complete.

Vos called for the investigation shortly after the November 2020 election. This summer, he announced former conservative Wisconsin Supreme Court justice Michael Gableman would lead the probe and that its initial, taxpayer-funded budget would be roughly $680,000. The inquiry was initially expected to be complete this fall. Since its outset, it has spurred controversy, confusion and several lawsuits.

“We don’t know when it will end,” Vos said in an interview with WPR. “Not because of what timeline we want to put into place, but (because) of the tactics employed by those who oppose our efforts.”

Multiple lawsuits have been filed over in-person testimony Gableman has sought for the investigation from state and local officials. In October, Attorney General Josh Kaul filed a lawsuit in Dane County seeking to invalidate the subpoenas issued in the probe. Kaul argued Gableman doesn’t have the authority to compel the officials to testify behind closed doors. Earlier this month, Gableman filed his own lawsuit seeking to force the mayors of Madison and Green Bay to provide the testimony about election administration in their communities or face jail time. A Waukesha County judge has delayed ruling on that case until Kaul’s case has a late-December hearing.

“My goal was to always have this conclude by the end of the year,” Vos said. “But I never in my wildest dreams foresaw the lengths the Democrats would go to try and stop and stymie this investigation.”

Vos said the lawsuits have added to the cost of the probe and may necessitate the approval of additional taxpayer funding.

“Every time they go to court, that is taking money out of the budget that we allocated,” he said.

“If additional resources are needed, I will certainly keep that in mind,” Vos added. “But, as of right now, Justice Gableman is operating within his budget.”

The Assembly Speaker also came to the defense of Gableman’s choice of staff in the probe, which first came to light earlier this month. The staff includes Ron Heuer, president of the Wisconsin Voter Alliance, a conservative advocacy group. Heuer brought an unsuccessful lawsuit before the Wisconsin Supreme Court last year seeking to overturn the state’s election results. In the court’s ruling, conservative justice Brian Hagedorn said the case “falls far short of the kind of compelling evidence and legal support we would undoubtedly need to countenance the court-ordered disenfranchisement of every Wisconsin voter.”

Other staff members in Gableman’s probe include Andrew Kloster, a former Trump administration official who has claimed since November 2020, that the election was “stolen” from the former president.

Vos, who has said President Joe Biden won the election, argued taxpayers should still trust the integrity of the investigation, despite the past comments and actions of those conducting it.

“I think you would want to ask people (to be involved) who have questions about the election,” he said.

He accused Democrats who have raised concerns about the staff’s backgrounds of using “McCarthyite tactics.”

The Republican-backed election investigation comes after Wisconsin has completed a series of routine state election audits and a presidential recount in the state’s two largest counties, as well as an audit from the Legislature’s nonpartisan Legislative Audit Bureau. None of those reviews have uncovered widespread fraud or wrongdoing. There have also been numerous Republican-backed lawsuits in the state, all of which have failed to result in findings of wrongdoing by election officials or voters.

No path forward for legislative takeover of federal elections

Vos also said he does not see the Legislature attempting to take over control of federal elections from the Wisconsin Elections Commission in the near future, as has been suggested by Wisconsin Republican U.S. Sen. Ron Johnson. Vos said he has reviewed a memo from the Legislature’s lawyers that said such a change wouldn’t be possible under current state law.

“(The law) is unlikely to change with Tony Evers in the governor’s chair, and I don’t anticipate that we would even try,” he said.

However, he said there need to be “fixes” to how the Wisconsin Elections Commission currently operates, including “guaranteeing” the commission acts quickly to get legislative approval on new policies and faces “enforcement mechanisms” if the bipartisan board issues guidance to local officials that conflicts with state law.

Vos has said members of the commission should “probably” be charged with crimes over 2020 guidance regarding voting in nursing homes. The commission has pushed back, saying its guidance made it possible for vulnerable nursing home residents to vote during the pandemic.

‘We don’t know when it will end’: Wisconsin Assembly Speaker says deadline for GOP-backed election investigation is unclear was originally published by Wisconsin Public Radio.