‘No Thanksgiving Without immigrants’

Advocates in Wisconsin call on congressional Democrats to deliver a pathway to citizenship.

By Isiah Holmes, Wisconsin Examiner - Nov 25th, 2021 11:42 am
Get a daily rundown of the top stories on Urban Milwaukee 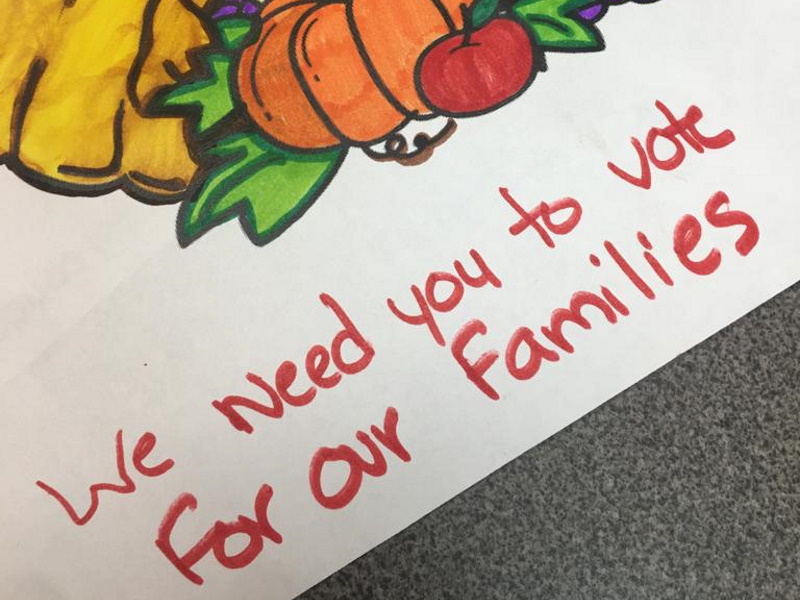 A card made by a child of an immigrant in Manitowoc. Photo courtesy of Voces de la Frontera/Wisconsin Examiner.

Immigration activists and the families of undocumented workers showed up  in Green Bay, Madison and Milwaukee outside the offices of Sen. Tammy Baldwin and Congresswoman Gwen Moore. Their message, aimed to keep the pressure on Democrats to provide a pathway to citizenship in the Build Back Better plan that passed the House and now moves to the Senate, was, “No Thanksgiving without immigrants, citizenship for my parents.”

Christine Neumann-Ortiz, executive director of Voces de la Frontera in Milwaukee, said some progress had been made. The current version of  the Build Back Better plan includes work permits for 7 million undocumented workers. “For us that does represent progress for the movement,” said Neumann-Ortiz, standing outside Moore’s office in Milwaukee with a group of undocumented workers and their families. “But of course, we are going to continue to call on Democrats in the Senate to use the power that they have to not just pass immigration reform with work permits, but to pass citizenship.” Nevertheless she called the immigration provisions in the current bill  “a demonstration that everything that we’re doing is making a difference. And we have to keep at it.”

In late October, Voces held a demonstration outside of Sen. Baldwin’s office in Milwaukee to demand that immigration reforms not be dropped from the Build Back Better plan. And while providing work permits will help ease pressure on some undocumented essential workers, advocates say the permits are not enough. Ultimately, they want a clear pathway to citizenship undocumented workers, many of whom worked in frontline industries during the COVID-19 pandemic.

One young participant, 19-year-old Leslie Flores, said, “We need Senator Baldwin and Democrats to fulfill their promises. As children of undocumented immigrants, we have to keep fighting for a better future for our families and stop living in fear.”

The Thanksgiving demonstration also served as a reminder that the early American settlers themselves were immigrants, and were hosted by indigenous peoples of North America. The United States of America has been sustained by immigration, Maria Mota, an older Latina woman who joined those gathered outside of Moore’s office, pointed out. Mota addressed the crowd through a loudspeaker in Spanish, with her words translated by Neumann-Ortiz.

“I’ve been waiting to adjust my status for 22 years,” said Mota, “my father was able to adjust his status back in the 1980s. And we are here to remind our government that this Thanksgiving, it was the Native American Indians that received the Europeans who came as immigrants to this country. And put food on the table.” Molta stressed today immigrants have, “continued to put food on the table. We’re not asking for anything that we don’t deserve, and we ask for our humanity to be recognized. We’re going to keep fighting, we’re not going to stop.” 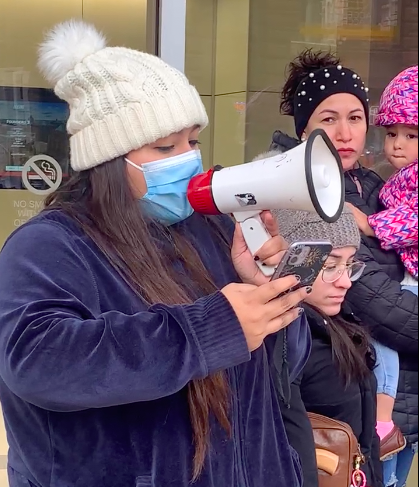 Cassandra Casas, who was  born and raised in Milwaukee but whose parents are undocumented, recalled the day in 2012 when Immigration and Customs Enforcement (ICE) officers came knocking on the door looking for her mother. “From the moment my mother left, my world turned upside down,” said Casas, who has  suffered from severe mental health problems ever since her mother’s deportation.  It has been years since her family has been united.

A 7-year-old boy named Angel wrote a brief letter to Moore. “I do not want families to be separated,” it read, “without a father or mother, there is no family. Citizenship for all!” Another young person, 11-year-old Giovanni Martinez from Manitowoc, had experienced a similar trauma. Martinez’s father was deported in 2012, the same year ICE came looking for Casas’ mother. “It has been nine years since I got to celebrate Thanksgiving with my dad,” said Martinez. “Now is the time to pass citizenship so other kids don’t have to suffer like me.”

Although the Senate Parliamentarian is expected to offer a positive advisory opinion on providing temporary work permits through Build Back Better, advocates and immigrant families say they need more. Although 7.1 million work permits would be covered by the provision, the undocumented working population in the United States is estimated to be around 11 million. In early October, a poll conducted by Global Strategy Group, found that 71% of voters surveyed supported a pathway to citizenship for undocumented immigrants. That included  88% of Democrats, 75% of independents, and 53% of Republicans. The poll was conducted in eight battleground states. Additionally, the poll found that two in three battleground state voters would be “upset” if immigration citizenship proposals didn’t pass.

Sergio Gonzales, executive director of the Immigration Hub, a team of former congressional staff, executive branch officials and immigration policy advocates, said the poll shows that immigration reform is popular with all voters.  “Despite the Republican noise and dog whistles around immigration and the border, voters again and again continue to support fixing our immigration system by centering protections for undocumented immigrants and humane solutions to manage our border and migration,” said Gonzales. “There’s a clear opportunity through reconciliation for Democrats to win the debate on immigration, gain votes and fulfill the promise they made to immigrant families long ago. There’s a powerful electorate of people of color and multi-generations that held their end of the bargain last year, and now Democrats have the chance to secure future victories by finally delivering on one of the most critical issues of our time. That is it, and the moment is here.”

The Build Back Better bill that passed the U.S. House last week failed to include a pathway to citizenship for 11 million immigrant essential workers, Dreamers and Temporary Protected Status holders. Instead, it contained only temporary work permits for an estimated  7.1 million immigrant workers and their families, the majority of whom have lived and worked in this country for more than a decade. A major struggle lies ahead in the coming month in the U.S. Senate, where Democrats cannot lose any votes within their party if they are to send the measure to Biden’s desk.

“We must escalate pressure on President Biden and Senate Democrats to create a path to citizenship as the Senate takes up the Build Back Better bill,” Neumann-Ortiz said. “Voces will be joining national days of action and lobbying in Washington DC on December 6th and 7th, and asks for people to contact Senator Baldwin to demand that she champion citizenship this year.”

‘No Thanksgiving without immigrants’ was originally published by the Wisconsin Examiner.