Trend could be devastating to families across Wisconsin this winter. 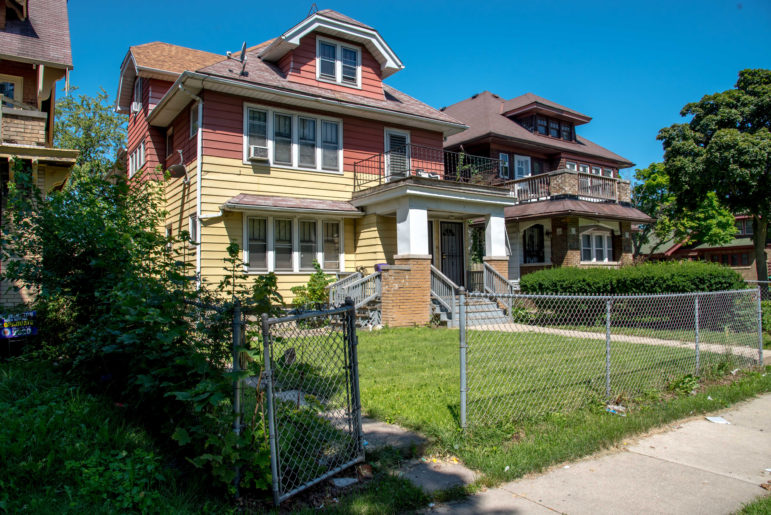 Photo by Will Cioci / Wisconsin Watch.

This summer, as the CDC’s moratorium on evictions was set to end, housing advocates across Wisconsin warned of a coming “eviction apocalypse,” as one of the few protections for people struggling to pay rent in an economy turned upside down by a pandemic went away and aid groups struggled to get millions of dollars in rent relief out the door.

Since then, organizations have dispersed more than $80 million in relief to nearly 19,000 families, but in the past two months formal eviction filings are returning to pre-pandemic levels, according to data from the Wisconsin Department of Administration.

A return to pre-pandemic levels of court filings for evictions means the predicted flood of evictions hasn’t arrived, advocates say, but there are more factors at play than just formal evictions and a number of trends could be devastating to families across Wisconsin this winter.

Kristin Slonski, legal services director at Wisconsin Judicare, says she and her staff have seen a number of people who, rather than getting formally evicted, are just not given the opportunity to renew an expiring lease.

Some of these people, Slonski says, owed back rent during the pandemic and were aided by the emergency rent assistance programs created through federal relief packages. But now, even if they’ve caught up, their landlords are impatient and are choosing not to renew the lease. This method of informal eviction can be more challenging, Slonski says, because there are fewer ways to fight it.

“What appears to be happening, this is all anecdotal, what we’re seeing is people who if they had fallen into arrears, for the most part, they got that paid through the Wisconsin Emergency Rental Assistance program,” she says. “Now they’re facing a refusal to renew the tenancy, which is different than eviction for nonpayment of rent and also provides fewer legal avenues to remedy it. Generally speaking a landlord can refuse to renew a rental agreement. They don’t have to give a reason.”

Unless the decision not to renew is driven by discrimination against a minority group and that can be proven in court, there’s not much that can be challenged, according to Slonski.

“Their relationship with their landlord really got poisoned during COVID and never recovered,” she says. “It was retaliation because I was so late on rent. It’s not protected, it’s not a protected class. We’re seeing a lot of people who don’t have a defense against the decision to not renew.”

Andy Heidt, housing policy and program manager at WISCAP, says nonrenewals are difficult to track but that he’s seen an increase in the payment of security deposits across the state — which suggests to him people are being forced to move because their lease wasn’t renewed.

In addition to the nonrenewals, for many of the people who have been helped by the rent assistance programs, that help may soon be running out because eligibility only lasts for 18 months. Heidt says the work of nonprofit groups and housing advocates has helped thousands of families in recent months, but the culmination of all these factors scares him.

“It’s a delicate balancing act with a lot of factors going on,” Heidt says. “Folks who have used their 18 months already, there’s less resources. We are at a precipice of a potentially frightening time.”

“I’m certainly glad the worst-case scenarios have not come to bear, but there’s a long winter ahead and that assistance may run out mid-winter,” he continues.

When a family is facing the nonrenewal of their lease, Slonski says the staff at Judicare first tries to work with the landlord to get a little more time before they’re forced to move and do whatever they can to avoid a formal eviction filing — because that public record through a simple search of Wisconsin’s court system can make it much harder to find a place to rent in the future. But facing this situation can force a family into a very stark decision, she says.

“We advise the tenant if they can find another place they’re best served by moving out. Even if it’s not granted, you can see [an eviction] on CCAP,” she says. “In the market we have where landlords can pick and choose their tenants, they’re more likely to take a tenant who hasn’t been evicted. That said, if you come to the end of your tenancy and you’re risking an eviction but literally have nowhere to go and it’s 17 degrees outside, you’ve got to do what you’ve got to do to protect yourself.”

Even as they continue to work to protect vulnerable renters, Slonski and Heidt see a completely untenable housing market in Wisconsin and no policy solutions immediately available to ease the strain.

“It’s tough, of course it’s a money issue, it’s always a money issue, but it’s also an issue of supply and demand,” Slonski says. “There’s far more demand for affordable housing than there is supply available. It’s all putting the squeeze on right now.”

Heidt says he hopes Wisconsin’s policymakers can find a way through intense partisan polarization and see that people in every part of the state are struggling.

“I don’t think there’s a surplus of vacant, affordable units anywhere in the state,” he says. “We’ve gotten $81 million out the door and the need is not slowing down. If we’d taken half that $80 million and built permanent affordable housing, would we be getting at the market side of this issue?”

“It’s so hard for some communities, politicians to wrap their heads around permanent solutions around affordable housing,” he continues. “Especially in Wisconsin with an absurd legislative impasse between polarized groups. We’re not in rational times where people can come together and find common ground to solve problems. It’s got to be incredibly frightening to be low income, no income, to not be white in this state and deal with the reality around you and the disparities that evolve from a lack of resources.”

Evictions, housing insecurity in Wisconsin become a ‘slow boil’ of crises ahead of winter was originally published by the Wisconsin Examiner.