The Golden Age of Venice 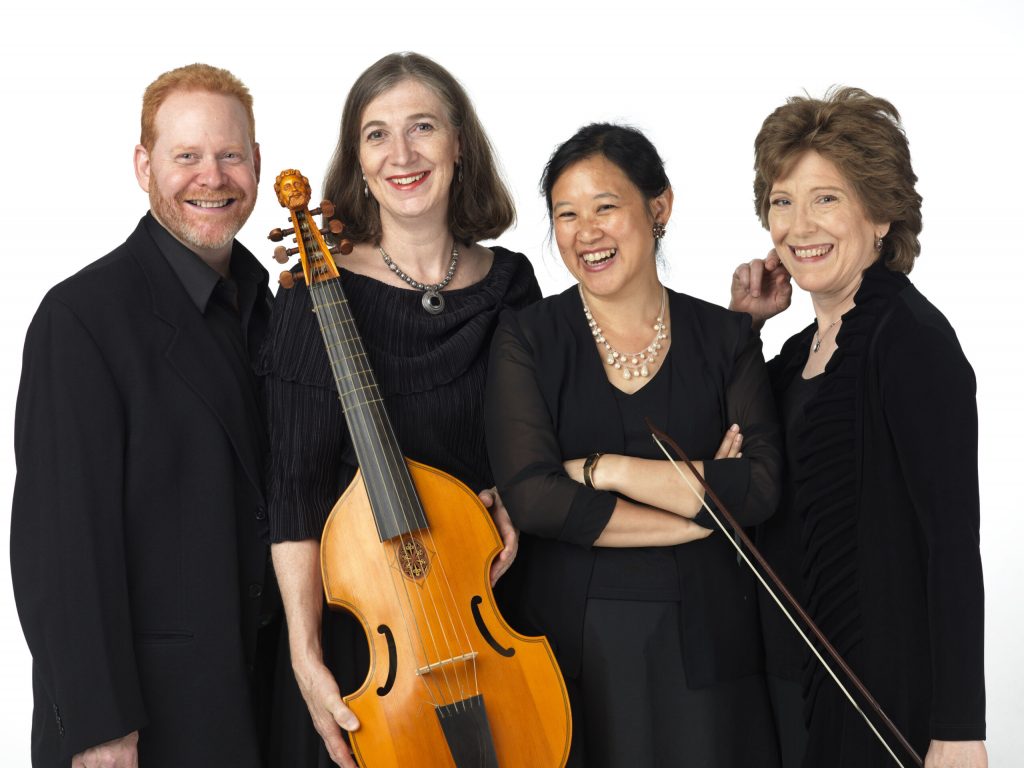 The viol (“viola da gamba” in Italian) is a fretted string instrument that likely originated as the “bowed guitar” in 15th century Spain. Viols generally have six strings and are tuned in intervals of a fourth, except for the major third that separates the two middle strings. Players hold the instrument against or between their knees and play with a bow held with an underhand grip. Parthenia’s members, Rosamund Morley, Lawrence Lipnik, Beverly Au, and Lisa Terry, play treble, tenor, and bass viols, the three main members of the viol family.

The genesis of Parthenia’s “Italia Mia” program was an invitation to perform in 2019 at the National Gallery of Art in Washington, D.C., in connection with an exhibit of paintings by 16th-century Venetian painter Jacopo Tintoretto. Compositions for viol and voice were added when Parthenia played the program during the closing weekend of the 2019 Venice Biennale contemporary visual art exhibit.

Viola da gamba music flourished in 16th century Italy, noted Parthenia performer and program director Rosamund Morley. A confluence of factors nurtured the popularity of the viol: the presence in Venice of many wealthy patrons of the arts, the community of foreigners who shared musical innovation from their homelands, and the growth of confraternities called Scoule Grande that employed artists and musicians.  Venice also was the site of Europe’s most advanced music publishers. That industry attracted composers from throughout the continent who came to supervise the publication of their work. Such trips by composers helped to spread Venetian musical styles everywhere in Europe.

Saturday evening’s performance includes secular and sacred canzonas, dances, madrigals, and motets composed for solo and ensemble viol and voice, including pieces written by well-known composers such as Andrea and Giovanni Gabrielli and Claudio Monteverdi as well as others who, according to Morley, deserve greater recognition. Soprano Panthaki will join in the performance of six pieces, including Italia Mia, which closes the program. Morley describes the text, written by Francesco Petrarca (Petrarch) two centuries before Philippe Verdelot composed the setting, as “an exquisite madrigal… begging for peace and harmony.”

Early Music Now has provided a tantalizing taste of Parthenia’s performance with a video preview of Italia Mia. The lyrical performance of this haunting setting promises a rewarding listening experience.

Saturday’s concert begins at 5 p.m. at St. Paul’s Episcopal Church, 914 E. Knapp St., an intimate venue that supports Parthenia’s performance with historical accuracy and no amplification. Tickets may be purchased at the door, subject to availability, at the EMN website, and by phone at 414-225-3113. Online and phone sales end at noon Friday. EMN requires proof of vaccination against COVID-19, or proof of a negative test within 72 hours, accompanied by a valid ID, before entering the church. In addition, all patrons, staff, and volunteers must wear a mask fully covering nose and mouth throughout the performance space.

The next EMN event, on December 14, features a group of 28 musicians led by the vocalists and instrumentalists of The Newberry Consort. The performance will showcase the Christmas traditions of 17th century Mexico.