By Isiah Holmes, Wisconsin Examiner - Sep 15th, 2021 01:25 pm
Get a daily rundown of the top stories on Urban Milwaukee 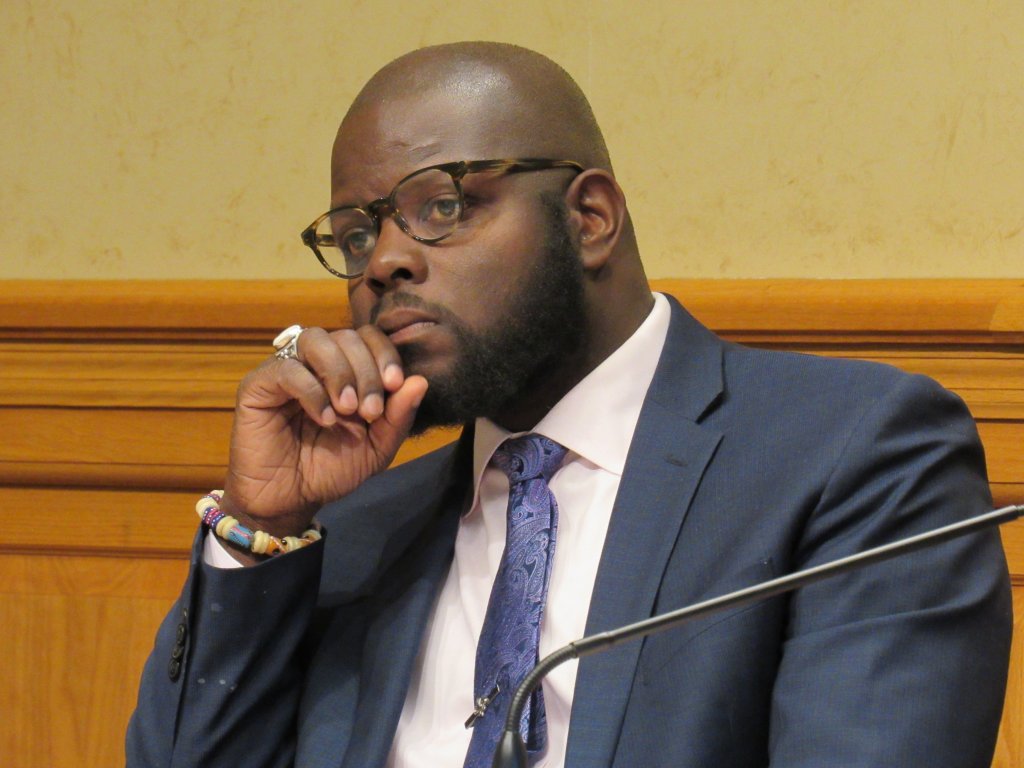 As a young man growing up in Milwaukee, he’d too found himself caught in the web of seemingly discriminatory traffic stops. To a certain degree, however, Moore Omokunde had a layer of protection in these encounters. “I’d be driving my mother’s car,” the representative, whose mother is the well-known congresswoman Gwen Moore, told Wisconsin Examiner.

“There were times when I was pulled over by cops,” he continues, “and they asked me whose car I’m driving. I let them know. They come back, and their tone is totally different.” Any number of reasons, such as minor alleged traffic infractions, could be given for such a stop. In one particular case, an officer accused a young Moore Omokunde of speeding and not wearing a seat belt. Moore Omokunde countered that, “But I did have my seat belt on. I took it off when you were coming up to the car.” Moore Omokunde recalls that the officer retorted, “That’s not what I want to hear.”

The officer went back to the squad car, then returned with a change of tone and a willingness to give simply a warning rather than a ticket. “At one point I concluded that only me, my brother and my sister could survive a police encounter,” he admits. “The only three Black people in the city.”

It’s those sorts of memories that Moore Omokunde used to inform legislation he has authored to help combat the problem of so-called “bad apple” police officers switching to new jobs on a different force. Encounters like traffic stops or getting detained and questioned for no reason are often the start of stories with tragic headlines. At times, such worst-case scenarios leave tell-all trails within the files of the officers involved. That isn’t enough, says Moore Omokunde. So he’s authored a bill that would de-certify officers for use-of-force violations, or for leaving the job while under investigation.

The bill aims to create a freeze period, during which police cannot avoid scrutiny by switching departments. It does this by adding to new situations that trigger statewide decertification protocol by the Law Enforcement Standards Board. Law enforcement officers would be decertified for violating an official use-of-force policy or terminating employment when under investigation for official misconduct. It applies to tribal law enforcement and juvenile detention officers as well.

Moore Omokunde was struck by a recent report by the Wisconsin Center for Investigative Journalism that found that hundreds of Wisconsin officers who were fired found new employment at other agencies. For example, a New Berlin officer was hired in 2018, despite the Waukesha Police Department having arrested him in 2016 after a drunken bar fight. The officer, Jacob Ungerer, was permanently banned from the bar. The same year Ungerer was hired by New Berlin, Waukesha PD again responded to a drunken incident involving the officer. After more run-ins, and while still in his probationary period, Ungerer was fired from New Berlin. About 18 months later, he was hired by the Middleton Police Department.

“You got many wandering cops, or wandering officers,” Moore Omokunde says. “And the report showed that when cops are fired in one incident, that they’re going to be fired again.” The Yale Law Journal conducted a study titled “The Wandering Officer” on nearly 100,000 officers from 500 agencies across Florida, spanning a 30-year period. The study stated that, “although we cannot determine the precise reasons for the firings, these results suggest that wandering officers may pose serious risks, particularly given how difficult it is to fire a police officer.”

Moore Omokunde emphasizes, “what we need to make sure that we’re doing is creating a culture of accountability. And nipping things in the bud.” When he first crafted the bill, prior to the recent study’s release, Moore Omokunde focused mostly on the case of Joseph Mensah. While employed at the Wauwatosa Police Department, Mensah was involved in three fatal shootings over a five year period. Two of those shootings occurred within his first year at the department, while Mensah was still in his probationary period. While his second shooting was being reviewed, Mensah was awarded the department’s medal of valor for his actions during his first fatal shooting.

After significant pressure and protests followed his third fatal shooting, Mensah was suspended with pay by Wauwatosa’s Police and Fire Commission. Later, an independent investigation found grounds for firing Mensah for violating department policies. However, once the officer was cleared of the third shooting, Mensah resigned from Wauwatosa PD and soon after he got hired at the Waukesha County Sheriff’s Department, where he is now a detective. Moore Omokunde believes that, “if he had been decertified after the first one, and been called into question, then the other two may not have happened.”

Further compounding the issue are police unions, which often fight to keep officers’ records hidden. “That’s not only for law enforcement officers, cops on the street,” explained Moore Omokunde, “that also makes it difficult for those who are trying to hire corrections officers to look at their records and see what they’ve done in other places as well.” Misconduct, however, encompasses a wide variety of actions. Moore Omokunde stresses that in his bill, “we’re asking for the most egregious things that these officers do — these use-of-force violations. So we want to be able to de-certify them in a timely manner.”

His legislation also creates an opportunity for local police and fire commissions to review an officer’s history, and make the determination for themselves as to whether they want to hire that individual. “We know that [cop hopping] is prevalent, we know that this needs to be done,” says Moore Omokunde. “And we know that there are some communities that have three, four, five of these officers who have been fired from other agencies. And, he notes, they don’t necessarily have to speak about their past issues when interviewing for new jobs.”

It’s a complex issue. At times, municipalities may feel under pressure to hire such officers due to a small academy pool. So rather than find someone willing to go through hundreds of hours at the academy, they hire an officer involved in past problems, such as the hundreds found in the study. Additionally, misconduct spans a wide scope of behaviors. Recently in Milwaukee, an officer, Nikolas Zens, was fired for shooting the wrong person during a pursuit. Court actions are also continuing in the case of another Milwaukee officer, Matthew Willmann.

During Black Lives Matter protests last year, the off-duty officer attacked two independent photographers, according to Up North News. One of them, LaTasha Lux, suffered a concussion after the incident. Several Milwaukee officers who responded to the incident were placed under investigation due to their combative posture against the photographers. Willmann himself faces misdemeanor charges of battery and disorderly conduct. According to CCAP, a jury trial was set for Oct. 25. (Both Lux and the other photographer, Sean Kafer, are also on the protester list which was created during that summer of demonstrations.)

Moore Omokunde finds all of these incidents troubling. However, he hopes that by focusing on the most egregious use-of-force acts, his bill can gain support from his Republican peers, although the measure currently lists only Democratic sponsors and the Senate version is sponsored by another Democrat, Sen. Chris Larson (D-Milwaukee). Ultimately, Moore Omokunde hopes the bill will be a step towards a future he and others strived for as young organizers.

“I think police should want to be part of creating the kind of society that makes it unnecessary for them to exist,” said Moore Omokunde. “Because as an organizer, you’re always taught that your desire is to work yourself out of a job. And so I think that it’s important that other people who work in these kinds of fields should have this same goal, this same perspective. … To say at one point, I want us to have a society where we don’t need to have the kind of policing that we have now. Where we re-imagine law enforcement, and we re-imagine public safety that doesn’t look like this.”

Moore Omokunde presses for bill to prevent police job-hopping was originally published by the Wisconsin Examiner.