By Danielle Kaeding, Wisconsin Public Radio - Sep 9th, 2021 01:01 pm
Get a daily rundown of the top stories on Urban Milwaukee 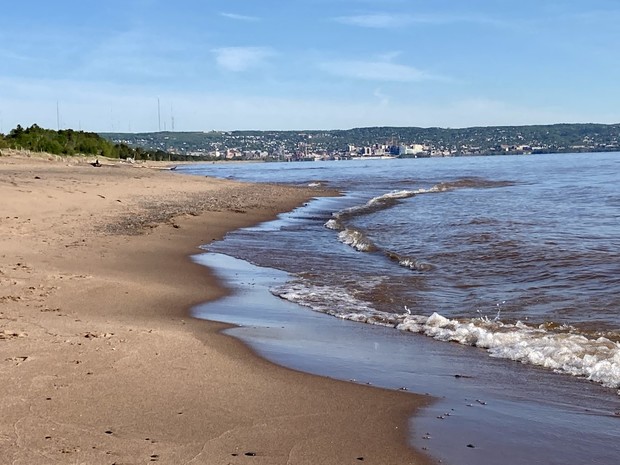 The shores of Lake Superior in Duluth, Minn., can be seen in this photo taken May 29, 2021. Water levels on Lake Superior have been dropping as the basin has seen abnormally dry to severe drought conditions. Danielle Kaeding/WPR

For the first time in seven years, water levels on Lake Superior are on par with the lake’s long-term average after witnessing record highs in recent years.

In August, the average water levels on Lake Superior dropped less than an inch to 602.17 feet — matching its long-term average for the first time since April 2014. The lake was nearly a foot below water levels in August last year, falling 11 inches.

The decline has been driven by abnormally dry to extreme drought conditions across the Lake Superior basin.

“The Lake Superior basin in particular has been very dry for really this whole summer and actually even back into late springtime,” said Deanna Apps, physical scientist with the U.S. Army Corps of Engineers in Detroit. “We’ve just seen more persistent dry conditions in that area of the basin.”

The change is a significant shift for people living around the lake, said Lauren Fry, physical scientist at the National Oceanic and Atmospheric Administration Great Lakes Environmental Research Lab.

“Since the beginning of 2013 up until the past couple years, we’ve had a lot of water coming into the system — not just on Lake Superior, but all of the Great Lakes,” said Fry.

Lake Superior witnessed a record-setting rise in water levels from 2013 to 2014 as levels surged across the Great Lakes, eroding shorelines and causing hundreds of millions of dollars in damage to infrastructure along coastal communities.

“It is kind of dramatic because we’ve been seeing pretty high water levels up until just recently,” said Fry.

Just two years ago, Lake Superior was 13 inches higher in September, marking the lake’s highest monthly average on record. The Lake Superior basin saw 73 percent of its average rainfall in August at 2.29 inches. All other lakes saw slightly above average precipitation.

“The Lake Superior basin has been a little bit of an anomaly, I’d say, this summer where we have seen wetter conditions across the other lake basins, especially in August and in July,” said Apps. “It’s been wetter in the other parts of the Great Lakes region.”

Even so, the Great Lakes basin as a whole has witnessed less than average rainfall over the last year, according to the Army Corps. While Lake Ontario rose about 2 inches, water levels are also below the lake’s long-term average.

The lakes experience seasonal fluctuations and peak in the late spring and summer before entering a period of decline in late summer and early fall. The Great Lakes are expected to remain below record high water levels seen in recent years over the next six months.

Lakeshore communities along Lake Superior are likely to see some relief from erosion and flooding as water levels are expected to hover near average. But, Apps noted storms could bring variability in water levels.

“Those could still be a concern, but with the water levels coming back to near average that will definitely lessen impacts across the shoreline,” she said.

Beyond the next six months, water levels on the Great Lakes are more difficult to predict due to a “tug-of-war” between precipitation and evaporation, which can be impacted by climate change. Prior to early 2013, the lakes had seen water levels well below average since the late 1990s. Lake Superior has set monthly records in September for high and low water levels over the past two decades.