The department shared the list with other Law Enforcement Agencies.

By Isiah Holmes, Wisconsin Examiner - Aug 27th, 2021 04:55 pm
Get a daily rundown of the top stories on Urban Milwaukee 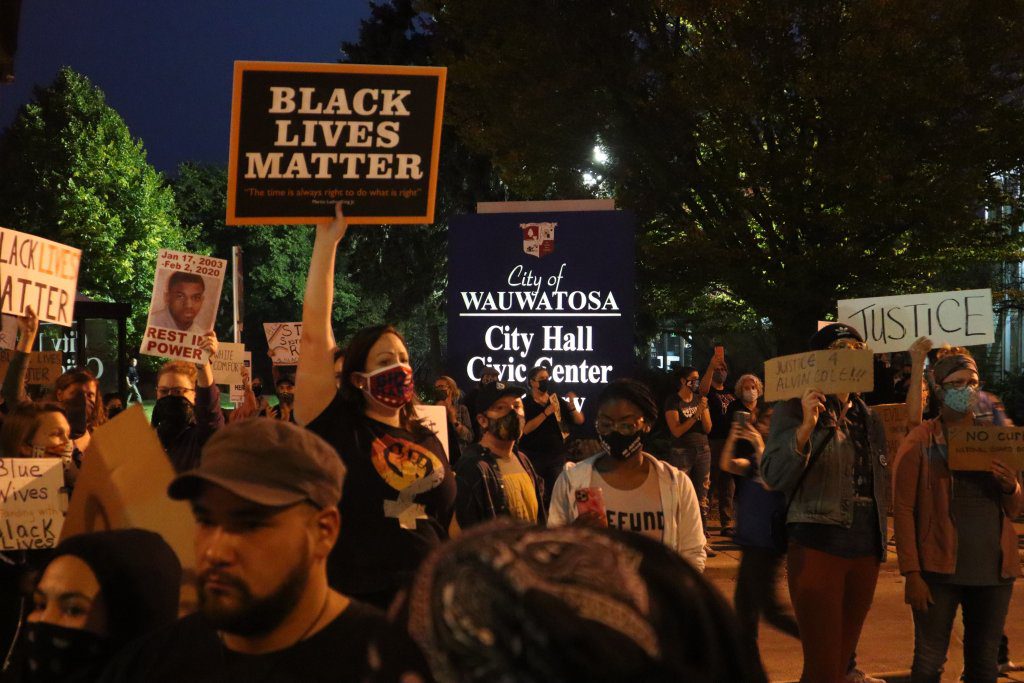 “TPR target list,” reads the subject line of the email. It was sent last October by Wauwatosa Police Department crime analyst Dominick Ratkowski.  Attached to his email was the now infamous list of people the department created and maintained since last summer.

Ratkowski’s email was sent one day before the city’s curfew was activated last year, following the Milwaukee County district attorney’s decision not to charge former officer Joseph Mensah for fatally shooting 17-year-old Alvin Cole in February 2020. The letters “TPR” refer to The People’s Revolution, a decentralized group of protesters who demonstrated throughout southeastern Wisconsin.

The Wauwatosa “protester list” was known to exist since January, after other emails sent by Ratkowski were obtained by the Wisconsin Examiner. However, the list 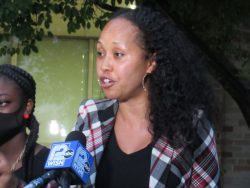 itself was not released until last month, and it documents a range of information on nearly 200 people who police view as involved in protests over the past year or longer. These most recent emails using the phrase “target list” appeared in an amended complaint filed by attorney Kimberley Motley in ongoing lawsuits stemming from police actions during the curfew.

The list, which appears to be part of a much broader effort by Wisconsin law enforcement to gather intelligence on protests, includes a variety of people, from Cole’s mother and sister to Motley and her legal partners, to outspoken Democratic elected officials and this journalist. The list includes people from across Milwaukee’s activist network, both well known and not, including Black Lives Matter protesters, community organizers and occasional protesters who were also involved in Milwaukee’s labor rights movement fueled by COVID-19 job loss. WPD has said the list was a tool used to identify witnesses, suspects or victims of any criminal activity related to the marches.

More information is now coming to light on how the list was used. The People’s Revolution grew out of the mass George Floyd-inspired marches and members continued to protest for 412 consecutive days after Floyd’s murder. Although law enforcement responses to TPR varied across the county, standoffs with Wauwatosa police became common when the group began frequent Wauwatosa protests. Officers were filmed photographing legal observers and reporters and would occasionally call out to protesters by name.

During the curfew last October, several TPR protesters said they felt they’d been targeted for arrest. Tracy Cole, the mother of police shooting victim Alvin Cole, his older sister Taleavia Cole and another of his family members were arrested on the curfew’s second night. Tracy was injured during her arrest and had to go to the hospital, while Taleavia was sent to the Waukesha County jail. Other protesters were detained in the City of West Allis.

Motley’s amended complaint cites testimony Ratkowski gave under deposition, as well as images of various emails. Sgt. Abby Pavlik, a WPD spokesperson, was unable to answer why Ratkowski referred to the “TPR target list.” When asked if specific people were targeted for arrest during the curfew, Pavlik replied, “individuals were arrested or detained that were in violation of the emergency order, city ordinances, or state law.” When asked whether the list was shared with the U.S. Marshals, who were involved in the arrest of the Cole family, Pavlik responded that “the information was shared with the Milwaukee Police Department and the local FBI office.”

The FBI denied a Freedom Of Information Request by the Wisconsin Examiner regarding the presence of one of its journalists on the list. The denial was vague though noted that the FBI “can neither confirm nor deny” the presence of anyone on a watch list.

Ratkowski’s emails, however, show that the list was shared throughout Milwaukee-area law enforcement. An email sent on Sept. 24, 2020, suggested that the list could have been freely shared by other departments once obtained. “I attached a list of The People’s Revolution members that I have been working on,” Ratkowski’s email states. “It identifies a large chunk of the people who were on I-94 last night. Let me know if you guys need help ID-ing people. Feel free to pass this along to who you think would find it useful.”

The email was sent to Brian Conte, a member of the Milwaukee County Sheriff’s Office who’s also on the board of directors of the Wisconsin Association of SWAT Personnel. At the end of September, the association will hold “lessons learned” conferences on “civil unrest” in Milwaukee, Kenosha and Wauwatosa. The Milwaukee County Sheriff’s Office didn’t respond to a request for comment. The office also stated in a separate open records request from the Wisconsin Examiner that it had no records in response to requests for the protester list.

On Nov. 10, following Wauwatosa’s curfew, Ratkowski sent the protester list to the Burlington Police Department. TPR members and other protesters had attended a Burlington School Board meeting regarding adopting anti-racism policies. Several people testified, from young people who’d directly experienced racism in the school district to parents who didn’t want Black Lives Matter-inspired teachings in the classroom. The meeting ended with chanting by the protesters who’d attended the meeting. Ratkowski emailed, “I saw that Burlington had a disruptive protest at the school board meeting last night. I attached a list of known People’s Revolution members. This group has been targeting the Milwaukee/Wauwatosa Area for 150+ days.” He ended the message by saying, “I have been following them from the start, and know them all.”

Wisconsin Examiner briefly spoke with Burlington PD’s public information sergeant, who said he needed to ask around the department for more information before commenting, but has yet to respond with any comment. The West Allis Police Department was also sent the list by Ratkowski. “Yes, a deputy chief with the West Allis Police Department (WAPD) did receive the email and attached document from a crime analyst at the Wauwatosa PD,” Deputy Chief Robert “Bob” Fletcher confirmed. “The WAPD did not share the list with any other agency, law enforcement or otherwise.” Fletcher added that the department, “did not utilize the list provided and individuals on the list, whether they live in West Allis or not, were not placed under surveillance. On the date of the march, some WAPD officers were in the area of the event but they were not specifically surveilling any particular individual.”

According to the amended complaint from attorney Motley, the list was also shared with city police departments of Racine, Brookfield, Oak Creek and Greenfield. The Marquette University Police Department also received the list, as well as the district attorney offices of Milwaukee and Racine counties.

In a previous Examiner story on the list Michael German, a former FBI agent of 16 years, and a current a fellow at the Brennan Center for Justice at the New York University law school, expressed concerns about such a list being passed around. “I have concerns about all of these agencies possessing this kind of record,” said German. “But, more importantly, if the conclusion of these court actions are for the police department to purge this list, which seems to be appropriate — how are they going to purge it out of the fusion center? And out of the FBI? Once they’ve disseminated it, it’s got a level of permanence that even if the FBI agrees to destroy the information, how are we not sure it continues to exist in some other place, by some other agency?”

In addition to information such as name, age, date of birth, race and gender, the list also included social media URL links and vehicle information for some of the people on the list. Some entries were more detailed than others, and at times people were identified not by their actual names but by their social media names. Motley, Tracy Cole, and Taleavia Cole, however, are among the very few individuals on the list who had their phone numbers confirmed by Wauwatosa police and put on the list. Under their names, their phone numbers can be seen, including a number under Tracy Cole’s name which is noted as “likely landline.” Each of those entries reads “ZetX confirmed.”

ZetX is a private company which provides various cell phone-related training and services to law enforcement. Wauwatosa police spokesperson Pavlik stated that ZetX “is a free software program that provides subscriber information which the Investigative Division uses as an investigative tool. The use of the term ‘ZetX confirmed’ simply indicates that a number [is] associated with a name.”

Attorney Kimberly Motley’s entry on the list, which shows the ZetX annotations. (Screenshot | Taken from communication sent to Wauwatosa officials)

The Cole family, as well as the other families of individuals killed by Milwaukee-area police and the protesters who support them, have long felt they’ve been under various kinds of surveillance. It remains unclear exactly how far within the law enforcement and intelligence community the protester list has been shared, or whether similar protester target lists exist elsewhere in the state. Among the demands of Motley’s lawsuit are that the list be purged from all agencies and departments which received it.