The engineering firm had just moved into its newly renovated office when the COVID-19 pandemic hit Milwaukee. 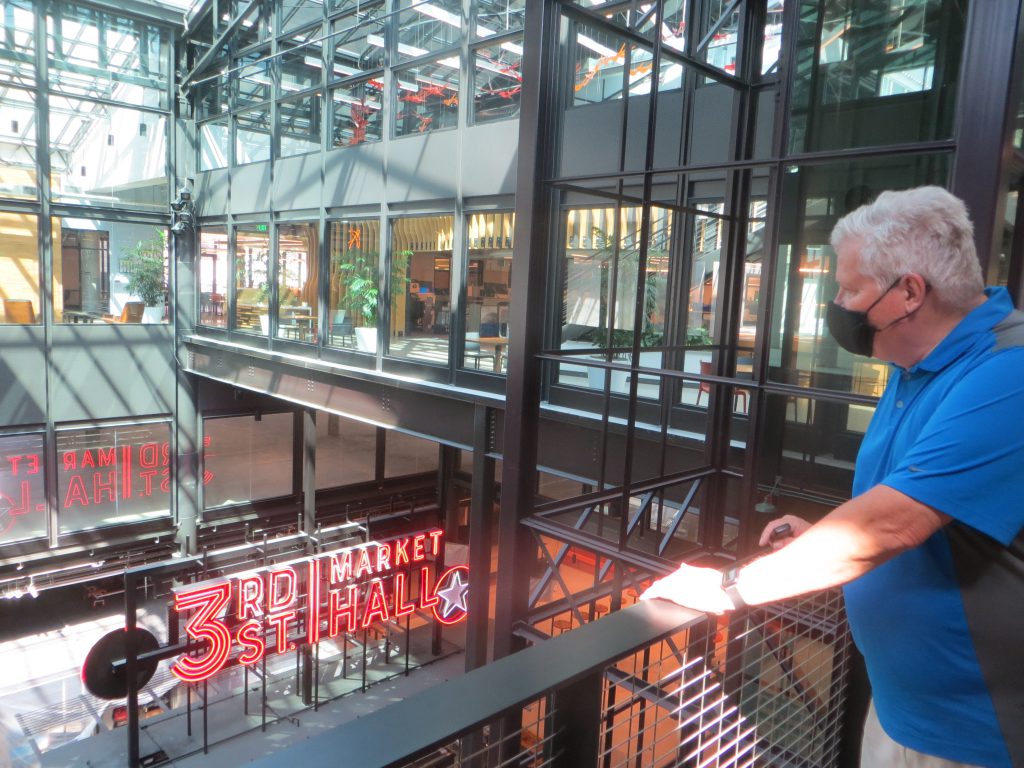 In December 2018 GRAEF announced it would be a major tenant of The Avenue, the redevelopment of the former Shops at Grand Avenue. The Milwaukee-based national engineering, planning and design firm would occupy 37,500 square feet on the third floor. At the time John Kissinger, the President and CEO of the employee-owned firm said, “as engineers, planners, technicians and designers, we see not only what is, but have a vision for what will be, and our vision has taken us downtown to The Avenue.” 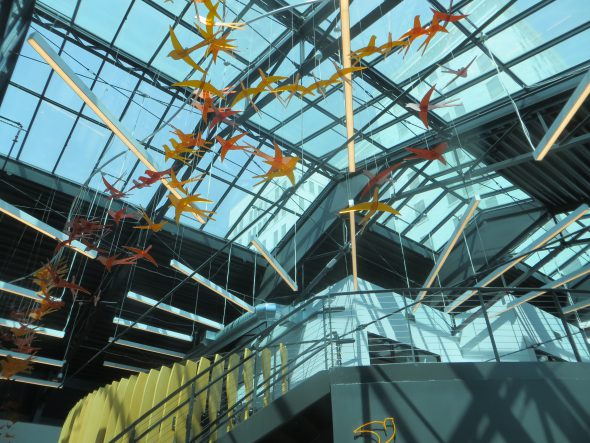 Sculpted birds suspended in the atrium. Photo by Michael Horne.

By January 2020 the work on the flexible, open-concept collaborative office space was complete, and the 170 staff members moved in, each represented by a sculpted bird suspended in the atrium, beneath a continuous skylight. Renovations to the 1979 structure included vastly increasing the floor plate, covering a large area previously open to street level. The space now spans the Majestic Building to the east and the Matthews Building to the west. Former exterior walls of those structures are now interior walls of the new office.

In March 2020, two months after moving in, the staff moved out due to COVID-19, and the dream workspace went dark as employees worked from home. On July 12th of this year, staff members rebooted the office space. The staff would be permitted to work two days a week of their choosing from home, with the other three days spent at the office, masked. I dropped in on Tuesday to speak with Kissinger about his firm and its “Coolest Workplace” location.

Kissinger, with his coffee mug in hand and a GRAEF mask on his face, emerges from a soaring mezzanine space, newly constructed and providing some shade from the atrium above. “Let’s sit outside on the terrace,” he suggests. “We don’t have to wear masks there. Nobody likes to wear masks.” The terrace, an original feature of the building, faces north and offers a view up N. Old World Third St. Kissinger ponders what lies ahead for his office with its “anti-COVID avoidance design. Closely spaced work areas, low partitions, collaborative spaces. Is COVID something we get beyond?” He asks the question not just for his firm and its offices in Wisconsin, Minnesota, Illinois and Florida, but for the dozens of others nationwide that rely upon GRAEF to design their facilities and workspaces.

In City 60 Years, but Never Before Downtown 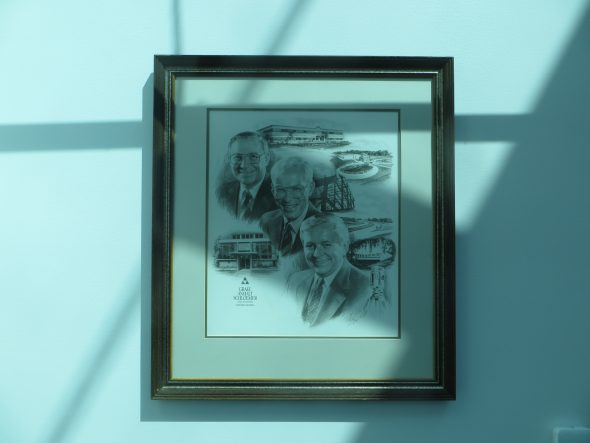 The firm was founded in 1961 as Graef, Anhalt, Schloemer-Consulting Engineers by Luther Graef, Leonard Anhalt and Robert Schloemer. Schloemer died in 2009, Anhalt in 2016. Graef, the former president of the American Society of Civil Engineers [ASCE] is 90 and living in Franklin, Kissinger says, pointing to a portrait of the founders that hangs in the office. “I saw him not long ago.” The first office was at N. 65th St. and W. Capitol Dr. The firm later moved to N. 95th St. and W. Bluemound Rd. and then to the Honey Creek Corporate Park, 115 S. 84th St. Although all locations were in the City of Milwaukee, none were particularly urban. “You couldn’t walk anyplace,” says Kissinger of his former headquarters. “After 20 years, we wanted something a little more vibrant.”

As is the case of many other businesses in search of new talent, including some of his customers, Kissinger looked downtown and settled on the location at 275 W. Wisconsin Ave. Kissinger was new to the firm when the Grand Avenue Mall opened in 1982. Graef, Arnhalt, Schloemer was the principal-in-charge for the complex project that preserved and expanded the historic Plankinton Mall. “It was a big deal — a marquee project for the firm,” Kissinger says. (It merited a mention in Schloemer’s 2009 obituary when he died at 86.) Thus it was with a certain sense of satisfaction that Kissinger was able to revise his firm’s original work. As an example he points to the mixture of unfinished concrete floors in the space — some original, and some dating to the 2020 renovations. A time capsule with the dates 1961-2020 is in a corner of the office lobby, hugging the floor much as a civil engineer’s Boundary Survey Monument hugs the ground. It would have been dedicated in an event last year, but for COVID, he says. 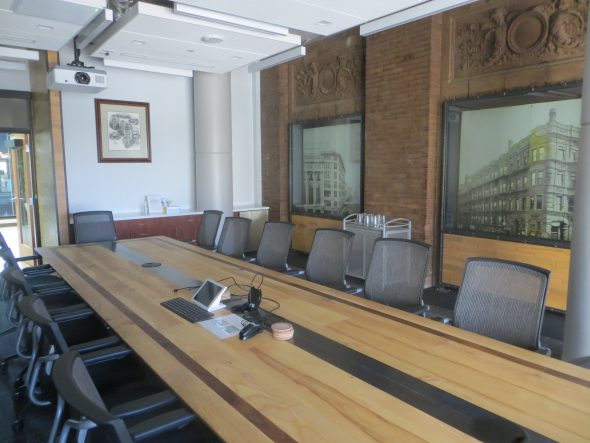 Board room. Here you can see the old exterior wall of the Matthews Building. Photo by Michael Horne.

Kissinger ticks off a list of the firm’s specialties. “We have engineers — civil, structural and transportation.” Some of their work is on campus-like properties, many of which face stormwater drainage issues due to site conditions and climate change, he says. “Large storms are an issue,” he says, whether in Wisconsin or Florida, although local strategies and codes vary. The firm also employs mechanical, plumbing and electrical engineers, urban planners, landscape architects and “regular architects,” he says.

A specialty of the firm is lighting design, and the fixtures in the office serve to highlight its expertise in an illuminating display. Hovering beneath the skylights, winged fixtures call to mind the firm’s work on the Milwaukee Art Museum‘s Calatrava addition, and its Calder mobile. GRAEF provided structural and site/civil engineering for the project. It also served as the associate landscape architect for the Dan Kiley-designed garden on the grounds. The board room is on the west end of the space, its west wall a highly ornamented one that was formerly an exterior wall of the Matthews Building. It includes photographs of the original building, hung in what had been windows. The vignette would be familiar to diners at the old food court there, as it had been retained during the remodeling. The office space has a circular traffic pattern, affording easy access to the various departments and specialties of the firm.  There are not one but two lounge and kitchen spaces, each given prominence, and not hidden away. Here workers can collaborate over coffee and a snack from the vending machines.

As much as Kissinger enjoys the outdoor deck overlooking downtown, he is cognizant that its season is limited. So he had the offices equipped with a novel deck that he calls his “indoor” outdoor patio. It is located behind glass walls off of the main lobby and overlooks the 3rd Street Market Hall, which is under construction and is scheduled to open in September. “No matter the weather outside, workers will be able to enjoy the sights, sounds — and smells” of what is expected to be a popular downtown destination, he says.

As Urban Milwaukee recently reported, a crowdfunding campaign has been launched to support a GRAEF-designed dog run beneath the elevated I-794 at 103 W. Clybourn St.

Kissinger offered his perspective: “When we first got involved it was pro bono, slam dunk. It would be paid by parking revenues.” COVID-19 killed that stream of revenue. “Ideally we will get funding, and we can get paid.”

On July 6th, just a week before returning to the office, Kissinger was notified that he was the recipient of the 2021 Edmund Friedman Professional Recognition Award from the ASCE. The award, established in 1960, is presented annually to a single individual “who has substantially contributed to the science and profession of engineering.” Kissinger is just one of five Wisconsinites to earn the honor. They include firm founder and former ASCE president Luther Graef.

According to a news release:

Kissinger is being recognized for his exemplary professional conduct and service in the field of civil engineering, delivering vital and enduring projects, his commitment to engineering education, helping young engineers from diverse backgrounds, and his outstanding community leadership and philanthropy.

Kissinger is modest about the achievement, explaining that Civil Engineers have an institutional philosophy that “the things we do benefit society. It’s a great honor to be one of only five people from Wisconsin who got the award. You get the award for the work others do.”

Ordinarily the award would be bestowed during a banquet, but this year the event will be virtual. “I’ve already recorded my acceptance speech,” he says. 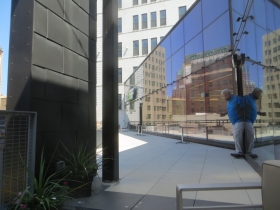 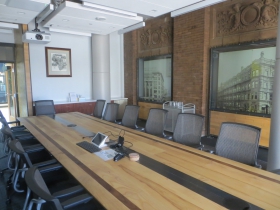 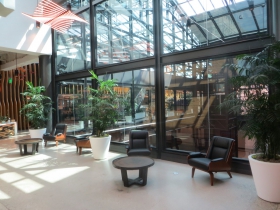 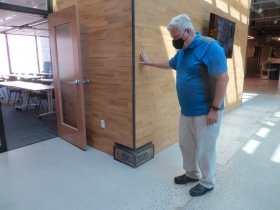 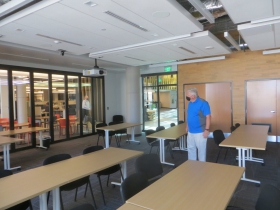 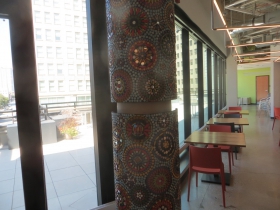