By Erik Gunn, Wisconsin Examiner - Aug 5th, 2021 12:58 pm
Get a daily rundown of the top stories on Urban Milwaukee 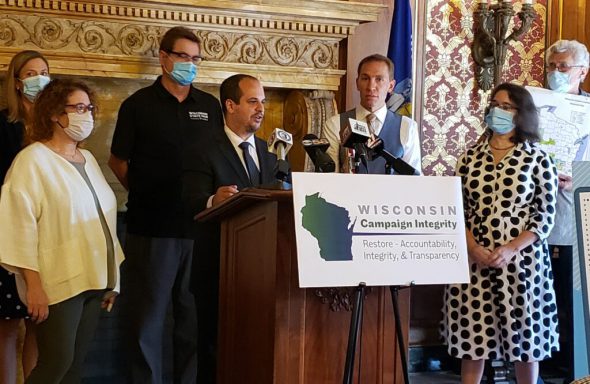 Democratic lawmakers who are circulating draft bills to tighten campaign finance laws acknowledge that their efforts face steep hurdles, including opposition from the Legislature’s Republican majority and a series of Supreme Court decisions that favored looser campaign finance laws instead.

Still, “you cannot win if you give up before the fight starts,” said state Rep. Jonathan Brostoff (D-Milwaukee) at a news conference this week to introduce the measures.

“Does anyone feel like our democracy is healthier because of the changes that were made six years ago by my Republican colleagues?” asked Sen. Melissa Agard (D-Madison).

Six of the proposals that the Democrats outlined would roll back the 2015 law and go further by:

A seventh proposal would call for a statewide advisory referendum on a proposed amendment to the U.S constitution to undo the U.S. Supreme Court’s Citizen United ruling. That ruling allowed corporations and special interest groups to spend unlimited amounts of money to support or oppose a political candidate. Several of the measures have been introduced in past legislative sessions.

State Rep. Lisa Subeck (D-Madison) offered a case study in the outsized influence of big donors, especially corporate ones, by pointing to the failed, bipartisan effort to get rid of the so-called dark store loophole. That’s the nickname for the practice — a result of a series of court rulings — that has enabled countless retailers to slash their property tax bills by arguing that an operating store should be taxed at the  same rate as a shuttered, empty one, disregarding the income that the operating store generates for its owner.

A bill that would have allowed tax assessors to apply a higher value to operating stores than closed ones won enough Republican backing that it could have passed both houses of the Legislature. Instead, it foundered, and at the Democrats’ Capitol news conference, Subeck blamed the opposition of the state’s largest business lobbying group, Wisconsin Manufacturers & Commerce (WMC).

“They have an incredible amount of influence in this building,” Subeck said. “And the reason they have so much influence is because they spend money on the campaigns of those in the majority party, and therefore they get to run the show. They get to be the gatekeepers and decide what legislation goes through … It’s not the average citizen who gets to make those decisions. It is those with the most money, and the biggest megaphone.”

George Penn of Wisconsin United to Amend spoke of 166 communities around the state that had passed ballot measures calling on the state Legislature to support a constitutional amendment “getting big money out of politics.” He endorsed the Democrats’ proposals as stepping stones to that larger objective.

Sen. Chris Larson (D-Milwaukee) decried “millions of special interest dollars loudly changing what we see and hear about the candidates and their campaigns.”

When the lawmakers were finished outlining the draft bills, Larson was asked whether the campaign of Gov. Tony Evers should return $2.7 million collected from the Democratic Party in 2020 or $1 million so far this year, in light of the proposals that would regulate such transfers more closely.

“There’s a question of whether the Democrats should play by a different set of rules than Republicans,” Larson said. “I’m not a fan of asymmetrical warfare or unilaterally laying down our arms.”

He added, however, that the Democrats “are talking about increasing transparency, letting in the sunshine and reducing the influence of corporations over our electoral process.” Sketching an imaginary GOP press conference “about campaign integrity,” Larson said, “It would be about trying to cut off voters, it would be about disparaging democracy” and limiting access to the ballot.

A reporter raised the question of their chances of making it through to enactment — given that the party they were blaming for undoing so much of Wisconsin’s campaign finance laws in 2015 still maintains a solid majority in both houses in 2021. Had the Democrats gotten any support from those same Republicans on their reform proposals? And how could they get any of them to the floor?

Brostoff replied, first with the assertion that among the Legislature’s rank and file members across the aisle there might be some covert support.

“There are a lot of Republicans who are completely fed up — even Republican politicians — with how corrupt the system has gotten and how much they have to sacrifice their own principles, their own morals, whatever they initially ran for and all the good government of Wisconsin ideology that they were raised with, in order to fulfill the wishes of their corporate overlords and puppet masters,” Brostoff said. For good measure, he name-checked WMC again, along with the GOP leaders of the Assembly and the Senate, to remove any ambiguity about who he was referring to.

Returning to those aforementioned “fed-up” Republicans who he believes chafe at the political influence of big money, Brostoff asked, “Are they willing to overcome the cowardice that’s currently stifled any movement on their end?”

And with that, he suggested that while enacting the proposals is the ultimate goal, along the way, winning isn’t the only thing. There’s also simply laying down a  marker.

The uphill battle to reform campaign finance laws was originally published by the Wisconsin Examiner.