Aim is 'to stop this mudslide of money before it suffocates our democracy.'

By Laurel White, Wisconsin Public Radio - Aug 4th, 2021 12:50 pm
Get a daily rundown of the top stories on Urban Milwaukee 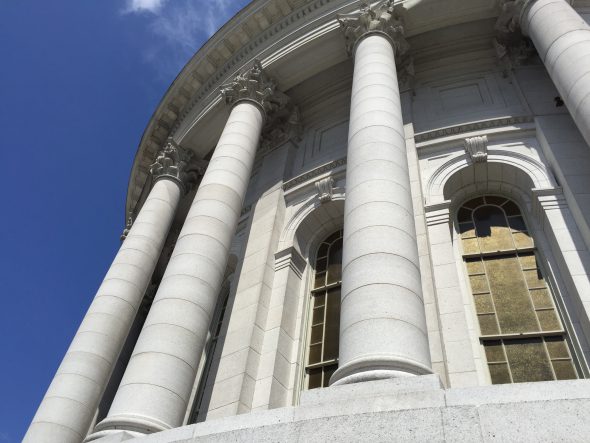 The amount of money someone could donate to a statewide political campaign in Wisconsin would be cut in half under a proposal unveiled by several Democratic state lawmakers Tuesday.

The proposed change, which is part of a package of seven bills related to campaign finance, is aimed at limiting big money donors and shedding more light on money in politics, sponsors said.

At the time, Republicans said the laws needed to be updated to be brought in line with court decisions that said Wisconsin’s regulations were too strict. Democrats argued the changes opened the door to too much influence from deep-pocketed donors, an argument Larson reiterated Tuesday.

“We need to stop this mudslide of money before it suffocates our democracy any more,” he said.

One bill in the package would halve how much an individual or candidate committee could give to a candidate for statewide office from $20,000 to $10,000. It would also set a $10,000 limit on donations to PACs, legislative campaign committees and political parties. There would be an exception for candidates contributing personal funds to their own candidate committee.

The plan would also nix so-called segregated funds for political parties and legislative campaign committees. Those funds are allowed to accept donations of up to $12,000 per year from groups like corporations, unions and professional organizations. Those groups weren’t allowed to donate to campaigns before the 2015 law changes.

Another proposal would put a question on the November 2022 statewide ballot in Wisconsin to ask voters if Congress should propose an amendment to override a 2010 decision by the U.S. Supreme Court that said corporate spending on campaigns is protected as free speech. A number of Democratic lawmakers and advocacy groups have been pushing for years for a constitutional amendment that would override the court’s decision in the case, Citizens United v. F.E.C.

“As long as money is speech, as the Supreme Court has determined it to be, those with the most money have the biggest megaphone and can drown out those who can’t afford to pay for speech,” said Rep. Lisa Subeck, D-Madison, at Tuesday’s press conference.

An advocacy group called Wisconsin United to Amend has worked to get questions on ballots across Wisconsin about the possible constitutional amendment. According to the group, more than 160 communities across the state have passed local government resolutions or approved ballot referendums backing the amendment.

Other bills in the Democratic campaign finance package would:

Larson introduced similar measures in 2017. The plans didn’t go anywhere in the GOP-controlled Legislature. At the time, some Republicans argued the changes would compromise donor privacy and stifle political expression.

“We were elected to fight and to push the agenda and if we do not do things like this … if we don’t keep fighting, keep pushing the envelope, then we shouldn’t be here in the first place,” he said. “God willing, Republicans will overcome their cowardice and join us.”

Republican leaders didn’t immediately respond to requests for comments on the bills.