By Sam Woods, Milwaukee Neighborhood News Service - Jul 14th, 2021 11:57 am
Get a daily rundown of the top stories on Urban Milwaukee 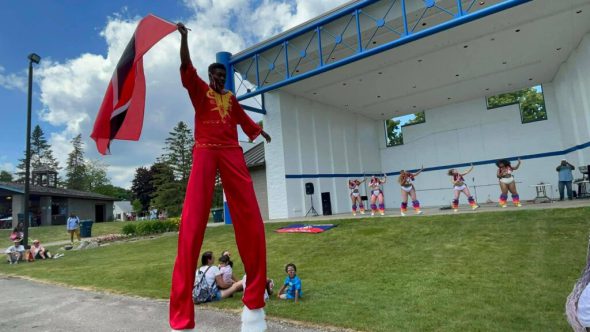 Allenton Riley, 18, shows off his talents as a Moko Jumbie. “There’s so many things in Milwaukee that’s the same,” he says. “But this is something you don’t usually see. It’s different and should be embraced.” (Photo provided to the Milwaukee Neighborhood News Service by Stacy Letrice)

At first, the young man crossing the streets on stilts in a viral video appears to be out having fun and doing something different.

But there is more to his story.

Allenton Riley, 18 and a recent Milwaukee High School of the Arts graduate, said he has been practicing Moko Jumbie since he was 6.

Twelve years later, he’s known as “Milwaukee’s Moko Jumbie.” Moko Jumbie is a tradition that extends back hundreds of years and originated in West Africa and is now practiced there, in the Caribbean and in the United States. Standing 10 to 15 feet high, Moko Jumbies were seen as protectors who looked over the village and participated in celebrations.

For Riley, Moko Jumbie is a way to stay out of trouble as well as a way to stand out. A video of him on stilts went viral last month after he was caught practicing for a Juneteenth performance.

“There’s so many things in Milwaukee that’s the same,” he said. “But this is something you don’t usually see. It’s different and should be embraced.”

Riley said when he was 6, he broke his leg practicing tae kwon do and ended up on crutches. After he healed, he fastened his crutches into stilts and began walking around on them. He already knew about Moko Jumbies from his cousin and from West African classmates.

He hid his talent from his parents for almost five years for fear they would disapprove of him practicing in the house.

“When I was 11 or 10 and I told them about stilt-walking in the house, they were like: ‘Oh, that explains this spot in the living room and these scuff marks in the basement,’” Riley said.

Soon, though, Riley let more people see his talent. He began performing at middle school events and connected with a group in New York called the Brooklyn Jumbies. Its members gave him tips and introduced him to other jumbies across the world.

Riley said he has been invited to carnivals in New York, Houston, Miami, and Trinidad and Tobago but has been unable to go, usually because he lacked funding. After performing in Milwaukee last month for Juneteenth Day, he was asked to teach his art to youth in Chicago with the Juke Boxx Mas Band.

When practicing for his Juneteenth gig, Riley was waiting to cross a street when someone started recording him on their phone.

“I was at a stop sign doing the ‘you go . . . no you go’ thing,” Riley said. “Next thing I knew I went viral, and my dad was upset with me for crossing streets I was not supposed to.”

Riley’s viral moment was not all it was cracked up to be. He found that most people commenting on the video did not know anything about Moko Jumbie and were instead just interested in teasing him.

Stacy Letrice, CEO of Jukeboxx Dance and founder of Team Jukeboxx Mas Band, saw herself in Riley’s viral experience. In her past, she had been recorded practicing dancehall, a type of Jamaican music and dance, without her permission and had thousands of people online completely missing the context of her art.

“It was exactly what happened with Al where people didn’t understand that this is actually African culture and instead just think you’re weird,” Letrice said. “When you actually understand the richness of it and the meaning behind it, it’s not weird at all.”

Stella Nathan, who was Riley’s college and career adviser in high school, also saw the viral post. At first, she was happy to see one of her students getting recognition. Until she started reading the comments.

She jumped into the comments section and tried to explain the context, but the task of educating strangers on the internet quickly became overwhelming.

“A lot of people joke and make fun of things they don’t understand,” Nathan said. “What I want people to take away from this is to stop and think before we turn everyone and everything into an internet joke or meme.”

Though he was disappointed to see people not understand his art, Riley remains determined. He wants to travel with the UniverSoul Circus and start a Moko Jumbie group in Milwaukee someday.

He also plans to keep practicing in Milwaukee this summer. He said Moko Jumbies in Trinidad are known to walk up to 14,000 feet at a time, so he needs to build his stamina.

He offers this advice for onlookers.

“If you see me and want to record, first off make sure you get a good angle. Second, ask questions and learn a little bit about why I’m on stilts and what it means to me,” he said.