By Isiah Holmes, Wisconsin Examiner - Jul 7th, 2021 12:22 pm
Get a daily rundown of the top stories on Urban Milwaukee 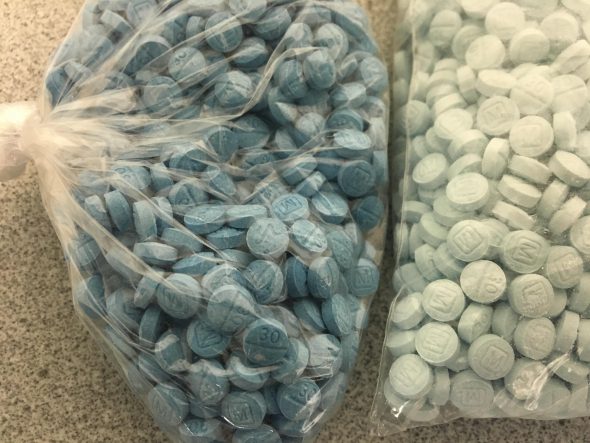 Gov. Evers joined local elected officials and advocates in Waukesha on Tuesday To announce a new step in addressing the opioid and overdose crisis across the state. “There’s no way around it folks,” Evers said during a press conference, “we have got to come together to put an end to this epidemic that shatters lives and devastates communities. One way we can do that is by holding the manufacturers and distributors of these harmful substances accountable.”

Just last week, Evers signed a bill into law that outlines how settlements from lawsuits against opioid manufacturers can be channeled to municipalities. Evers said on June 30 that he signed the bill, “because it will help bring much-needed funds to communities throughout Wisconsin to address the opioid pandemic through a settlement with opioid manufacturers and distributors.”

He added that he viewed the part of the bill that takes power to allocate money in such settlements away from the executive branch and gives it to the Legislature as “unconstitutional.” But it was worth it to sign the bill, he said, because “these funds will be used on opioid abatement and mitigation efforts and help ensure that the maximum amount of dollars available from settlement make it to Wisconsin communities as soon as possible.”

One of those communities is Waukesha County, which saw 83 drug-related deaths in 2020. Some 68 of those, according to data from the Waukesha County Medical Examiner’s Office, involved opioid-related substances, including heroin and fentanyl. The figures were the highest the county had seen since at least 2012.

“We are coming off a hard year,” said Waukesha County Executive Paul Farrow during Tuesday’s  press conference, “2020 was difficult for many individuals, but even more so for individuals that had substance use issues.” Farrow emphasized that “we had record numbers here in Waukesha County and across the state and the country.” For state and local political leaders, he added,  “Our role is to do everything we can to reduce this opioid epidemic.”

Waukesha County has partnered with Lutheran Social Services of Wisconsin and other organizations on outreach efforts. Similar efforts are going on in Milwaukee County, where a record breaking 544 drug overdose deaths occurred last year.

“When we think about the opioid epidemic it reaches communities in all parts of Wisconsin,” said Milwaukee County Executive David Crowley. “It doesn’t matter your socio-economic status, it doesn’t matter your race or your age. There’s no type of person who succumbs to opioid addiction.”

Crowley noted that Milwaukee, Waukesha and other counties have been pursuing remedies through the courts for years. “And now that we believe that a settlement may be imminent,” he said, “after years of work to hold the responsible parties accountable, this could be a historic settlement. And now the law allows for the largest share of settlement proceeds possibly to flow into mitigation and abatement programs that are critical to the fight of opioid addiction.”

Evers praised the fact that funds would be used for mitigation strategies, even as he conceded “I have some serious issues about the bill itself.” The opioid settlement law the governor signed  is controversial within his administration because of the way it limits  the attorney general’s role in negotiating settlements. The bill also does not cap the amount of money attorneys can take in fees. Nevertheless, Evers said, “I frankly was not willing to take away any of the opportunity to get the dollars to Wisconsin as soon as possible so that it could help Wisconsin communities all across the state.”

Farrow and Crowley both stressed the indiscriminate nature of the crisis. “The epidemic does not seek out members of one political party,” said Farrow. “It doesn’t ask who you are. It just affects us all, Wisconsinites all. There’s a time for partisan feelings to get put aside to get the right thing done.”

Opioid settlement resources could be transformative for communities, leaders say was originally published by the Wisconsin Examiner.