By Isiah Holmes and Henry Redman - Jul 7th, 2021 10:33 am
Get a daily rundown of the top stories on Urban Milwaukee 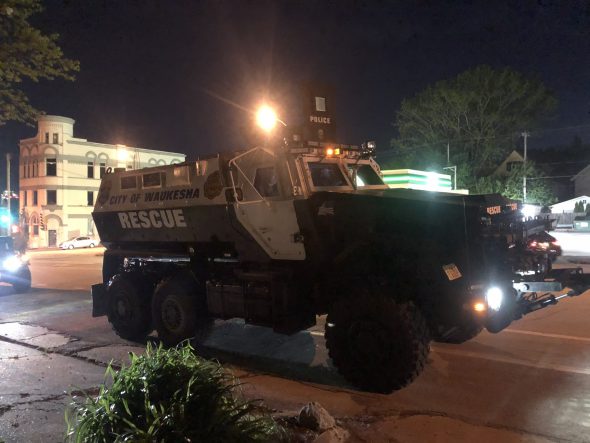 The Waukesha Police Department’s MRAP was in Milwaukee during the early days of the protests. Photo by Jeramey Jannene.

Around 10 p.m. on Aug. 25, 2020, teenager Kyle Rittenhouse was standing outside a dealership in Kenosha with a group of other armed men who said they were protecting the business, on  59th Street and Sheridan Road, from protesters. The city was in the midst of a multi-day eruption of demonstrations against police violence following the police shooting of Jacob Blake on Aug. 23.

Protests in the city were mostly peaceful during the day, but as the nights wore on, tensions flared. Businesses were burned down, store windows smashed, rocks and water bottles were thrown at riot-gear-clad police. Who responded from their armored vehicles with pepper spray, tear gas and rubber bullets.

The tension in the city, along with an explicit invitation to self-styled militia members on social media, brought Rittenhouse and hundreds of other, mostly white, armed civilians to the city — some were formal members of right wing groups such as the Proud Boys or Boogaloo Bois; others were just supporters of then-President Donald Trump and were determined to protect the city from the threat of “antifa” and Black Lives Matter.

During the protests the Kenosha Guard Facebook page, which had invited armed citizens to come defend the city, quickly gained thousands of followers, and remained active through the night. At 5:42 p.m. on Aug. 25 Kevin Matthewson, the Kenosha Guard’s “commander,” emailed Kenosha PD Chief Daniel Miskinis as to the group’s intentions.

“We are mobilizing tonight and have about 3,000 RSVP’s,” Matthewson wrote. “We have volunteers that will be in uptown, downtown, and at the entrances to other neighborhoods.”

“I ask that you do NOT have your officers tell us to go home under threat of arrest as you have done in the past,” Matthewson added. “We are willing to talk to KPD and open a discussion. It is evident that no matter how many officers, deputies, and other law enforcement officers that are here, you will be outnumbered.”

It’s unclear if Miskinis responded to the email.

At 9:57 p.m., around the same time Rittenhouse was guarding the car shop, Kenosha Police Sergeant Adam Jurgens sent a message in the department’s internal messaging system about the presence of armed civilians in the city. Jurgens’ message tells officers they may need to give these civilians an order to “stand down,” but downplays the threat posed by the militias, whom he describes as “very friendly.”

“If problems arise and those groups enter into the mix please provide them verbal orders to stand down if we have the resources to handle the calls for service,” Jurgens wrote. “Very friendly but we need to handle our business in-house as much as possible.”

About 45 minutes later, law enforcement officers driving by the car shop in an armored vehicle offer Rittenhouse’s group water. On a live streamed video of this exchange, one of the officers echoes Jurgens’ tone of friendship to the counter protesters carrying AR-15 style rifles.

“We appreciate you guys. We really do,” one of those officers can be heard saying to Rittenhouse and his group.

Before midnight, two people would be dead and a third injured. Rittenhouse, now 18, faces a first degree homicide charge and possible life imprisonment for allegedly shooting all three people. Rittenhouse was able to post $2 million bail, and has since remained out of custody.

At 11:26 p.m. that same evening, shortly before the shootings, a police officer texted  that, “a caller reported armed counter-protesters slashed tires at 58th/7th.” Some groups of Black Lives Matter protesters reported seeing militia members slashing tires during the Kenosha unrest, although their accounts had not been previously confirmed.

Jurgens’ message, along with thousands of other internal texts from that night, obtained by the Wisconsin Examiner through an open records request, show how Kenosha police officers were responding in real time to the chaos of that night.

If problems arise and those groups enter into the mix please provide them verbal orders to stand down if we have the resources to handle the calls for service. Very friendly but we need to handle our business in-house as much as possible.   – Kenosha Police Sgt. Adam Jurgens

Many of the messages show officers complaining about the long hours they worked in those days, others about minor nuisances of the job — “I gotta pee so bad lol,” one officer wrote shortly before 9 p.m.

But other messages show a different side of the Kenosha Police Department and its officers’ private views of the city, the protesters and the armed militias.

The department itself denies that any of these messages show officers siding with the militias or showing disdain for the protesters, saying there’s a simple explanation for all of them. Jurgens’ “very friendly” message, for example, is just the sergeant looking out for the safety of his subordinates.

“The message from Sergeant Jurgens was meant to convey to officers that would be potentially responding to calls for service where opposing groups came together violently, to be as safe as possible,” Sergeant Leo Viola told the Examiner in a written statement. “As I am sure you are aware, the Kenosha Police Department’s resources were stretched extremely thin. This unprecedented event in Kenosha posed challenges that the Police Department had never had to deal with in its history. Sergeant Jurgens’ concern as portrayed in the message was for his subordinate officers’ safety.”

But Jurgens wasn’t the only officer who responded dismissively to the presence — and threat — of armed civilians in the city.

About 15 minutes before Jurgens sent his message, officer Lindsey Zamborini sent a text to her coworkers stating there weren’t any problems with a group decked out in military-style gear occupying the city.

“Group at 39/52 armed with long guns and body armor no issues at this [missing word],” Zamborini wrote. “Look to be protecting property.”

If officers were surprisingly calm about the military grade hardware filling the city, it doesn’t matter, Viola said, because that intersection was blocks away from where the protests took place.

“The group of individuals that Officer Zamborini observed were at 52nd St. and 39th Ave. It is our belief that they were there with the permission of the property owner,” Viola says. “If you are familiar with City of Kenosha, you would know this location is approximately 30 blocks northwest of Civic Center.”

In the days following the violence, police officials denied that law enforcement played a role in encouraging armed counter protesters to descend on the city — even though a militia member later said police “herded” protesters toward them, Wisconsin Watch reported.

“The Kenosha Police Department in no way coordinated or supported any militia,” Viola wrote. “There were thousands of people who descended on Kenosha during this time that were not arrested in violation of the emergency curfew. It was only a minute fraction of people that were.  The Kenosha Police Department is committed to serving all people with respect, fairness and compassion. We are committed to preserving peace, order and safety; enforcing laws and ordinances; and safeguarding constitutional rights.”

Meanwhile, Kenosha police officers weren’t the only members of law enforcement on the street. Local, state and federal agencies descended on the city. Some police came from Trempealeau County. Members of the U.S. Marshal Service assisting KPD had their own communications, describing armed individuals roaming neighborhoods in trucks. “Wisconsin is an open carry state,” one Marshal wrote, noting that these individuals were observed and identified, but not arrested despite being in violation of the emergency declaration order and curfew.

Staff members of Kenosha Joint Services (KJS), an agency that provides support services such as 911 dispatch and evidence management to the county’s sheriff, police, fire and EMS, were also communicating with KPD officers that night.

“Yo i aint playing today,” one KJS staff member wrote. “ima start telling people whats up. taking OUR shit back.”

The messages also show that law enforcement isn’t immune from online rumors and misinformation, discussing the supposed threat of “antifa convoys” — a rumor that popped up during protests in cities across the country, although no such convoys appeared, inflaming  armed white counter protesters.

“About 2 hours south of Chicago theres a convoy of antifa vehicles, 8 school buses and a ton of vehicles,” another KJS employee wrote.

In the long, hot and intense days of late August last year, some Kenosha police officers were privately expressing views contrary to the department’s mission.

A common criticism of police in Wisconsin — and across the country, particularly after the murder of George Floyd by Minneapolis police — is that rather than serving to keep people safe, police function as an occupying force in minority and low income communities, rolling into neighborhoods in military-grade vehicles and killing people. Some of the text messages seem to support that community concern, showing Kenosha officers viewed the city not as a place to protect, but as territory to win.

“This is our city,” officer Pep Moretti wrote shortly after 7 p.m., overlooking the fact that, for many of the protesters, it was their city, too. A few hours later, after finishing up some work, Moretti got back out into the streets. “Clear with arrest sheet, back to the war zone,” he wrote at 9:42.

Moretti’s view of Kenosha as a “war zone” isn’t harmful to the city, Viola says. The messages instead show how much he wanted to protect the place where he lives.

“The messages from Officer Moretti were reflective of what we believe the majority of people in the City of Kenosha were feeling that night,” Viola wrote. “Officer Moretti, like other officers and citizens of Kenosha felt an obligation to protect the City that they love. The unprecedented violence and destruction that occurred during the three days leading up to Officer Moretti’s message no doubt made him emotional. Officer Moretti is a human being and subject to emotion the same as everyone else.”

By the end of the night, the tenor of the texts had changed. Officers weren’t treating the armed counter protesters as allies, instead, as Kyle Rittenhouse drove back across the Illinois border, they were trying to figure out what had happened.

One thought on “Kenosha Police ‘Very Friendly’ to Vigilantes?”