How Evers Could Change State Budget

Governor’s veto power is wide ranging. Action by him expected this week.

By Laurel White, Wisconsin Public Radio - Jul 7th, 2021 09:44 am
Get a daily rundown of the top stories on Urban Milwaukee 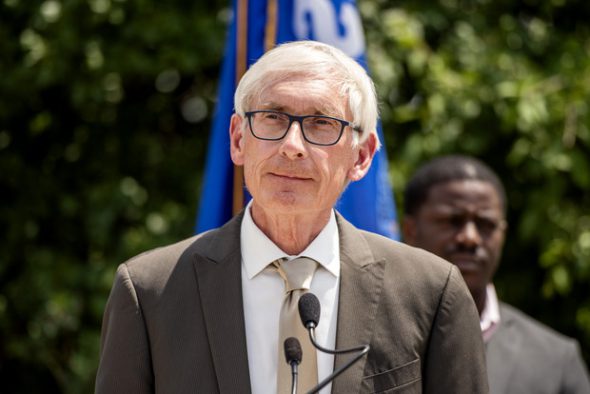 Gov. Tony Evers is expected to take action on the state budget this week, but how he may use his powerful veto pen to change the two-year spending plan remains unclear.

According to the governor’s office, Evers, a Democrat, officially received the state budget from the GOP-controlled Legislature on Friday. Under state law, he has six days, excluding Sunday, from receiving the budget to act on it. His actions could range from signing the plan with no changes — something Republicans have called for — to vetoing the entire budget, or using his veto pen to make changes, a process known as a partial veto.

Speaking with reporters on Tuesday, the governor said he wouldn’t comment on his plans, but noted “there’s a large amount of money in the budget for tax cuts,” adding that his veto pen could “balance that out.” He also called the budget’s funding for K-12 schools “inadequate.”

“We’re going to be spending just about every waking moment over the next couple days figuring out what our position will be on that,” he said of the budget signing. “So, stay tuned.”

Evers has one of the powerful veto pens in the country, with the ability to delete words, numbers and punctuation from the budget. According to a 2020 memo from the Legislature’s nonpartisan research office, most other governors are limited to eliminating or reducing spending amounts in budget bills. In contrast, the Wisconsin governor can make changes to any part of the budget, including policy language.

For example, in his partial vetoes of the last state budget, Evers vetoed a required study of state Capitol Building security that could have been made public. He cited security concerns related to making the study publicly available, and instead directed Capitol Police to review and update policies internally. There was no state funding associated with the study.

The governor’s partial veto powers include:

The most notable partial veto in the last budget was Evers’ move to increase school funding by $65 million. The governor accomplished the spending bump by increasing per-pupil aid in Wisconsin by $63 per student in each of the budget’s two years.

While powerful, the governor’s veto authority is certainly not unlimited. Over the past few decades, several new parameters have been set on the gubernatorial veto pen, including blocks on the so-called “Vanna White veto” and “Frankenstein” veto. Those partial veto moves were barred by constitutional amendments in 1990 and 2008, respectively.

A decision by the Wisconsin Supreme Court last year, in a case brought by a conservative advocacy group, could also limit the governor’s veto power this time. That decision struck down three of the Evers’ 2019 budget vetoes. The struck-down vetoes would have shifted funding for school buses to electric vehicle charging stations, changed the definition of “vapor products” and redefined who qualified for funding under a local road improvement fund.

Though a majority of justices on the court agreed those three vetoes went too far and exceeded the governor’s authority, they couldn’t agree on a majority-backed definition of why those vetoes were problematic or how a governor may overstep his or her proper veto authority in the future.

According to the Legislative Reference Bureau, the fractured decision did serve, however, to solidify a requirement that partial veto power cannot be used to change the subject of a particular section of the budget — in other words, the text that remains after a veto must still be about the original topic or subject.

According to Republican leaders, the 2021-2023 budget was strategically written to limit Evers from making any big policy changes with his veto pen.

Speaking with reporters last week, Senate Majority Leader Devin LeMahieu, R-Oostburg, said the GOP majority worked to create a budget that would give Evers little to work with.

“The intent of the finance committee was to produce a budget that had very few new policies, new programs, very few words involved,” LeMahieu said.

In the past, lawmakers have moved to include major policy items in the budget, particularly during the final stages of the budget committee process. In 2015, those last-minute changes included limits on public access to government records. Those changes were ultimately removed from the budget.

No such last-minute additions were made to the budget this year.

Veto Limbo: How Gov. Tony Evers Could Change The Next State Budget was originally published by Wisconsin Public Radio.