By Laurel White, Wisconsin Public Radio - Jun 17th, 2021 10:53 am
Get a daily rundown of the top stories on Urban Milwaukee 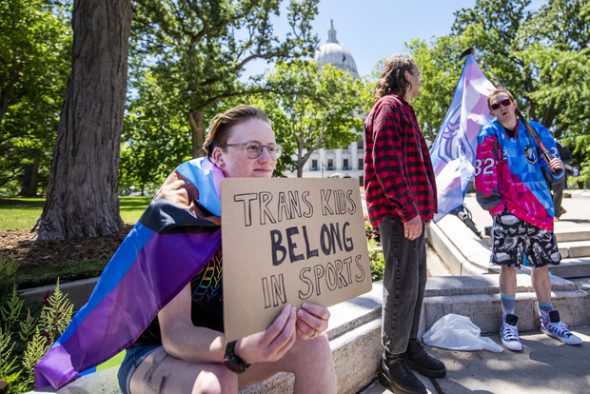 The Republican-controlled state Assembly voted Wednesday to approve two GOP bills that would bar transgender women and girls from playing on school sports teams that align with their gender identity.

The bills have gotten strong pushback since their introduction earlier this year and face a certain veto from Democratic Gov. Tony Evers, if they pass both chambers of the Legislature. They have yet to be voted on in the state Senate.

Both bills passed on party-line votes, 59-38, with Republicans voting in favor and Democrats against.

Under one proposal, K-12 public schools and private schools that participate in Wisconsin’s taxpayer-funded voucher program would be required to divide all sports teams by sex and officially bar any student who was designated male at birth from playing on girls teams.

A second bill would require the same policies at University of Wisconsin System schools and state technical colleges for women’s teams.

The proposals mirror similar efforts around the country.

At a public hearing in the Capitol last month, supporters of the bills argued the changes would protect other female athletes from injury and competitive disadvantage.

Ahead of Wednesday’s vote, one of the bills’ sponsors, Rep. Barbara Dittrich, R-Oconomowoc, reiterated that point.

“We already have women in Wisconsin who have suffered material damage from not having taken their spot on the podium,” Dittrich said. “These bills seek to protect those women.”

During debate, Rep. Janel Brandtjen, R-Menomonee Falls, another sponsor of the proposals, defended the bills against claims of bigotry from opponents.

“This isn’t bigotry, this is science,” Brandtjen said. “This isn’t a hate bill, this is a science bill. Women deserve to have an equal playing field, and that’s what this bill is about.”

Dittrich and Brandtjen were the only two Republican lawmakers to speak in support of the bills during the Assembly debate.

In contrast, a number of Democrats took the opportunity on Wednesday to voice their opposition, arguing the proposals are unnecessary and psychologically harmful to transgender students.

“This is one of those culture war issues,” said Assembly Minority Leader Gordon Hintz, D-Oshkosh, ahead of the vote. “It really undermines the health and well-being of kids. These bills are impacting kids — kids that are already faced with a tough enough challenge.”

“Winning is always more fun, but let’s not lose sight of what athletics should be about,” Spreitzer said. “Most young people play sports because they enjoy the game, they enjoy being part of a team, they enjoy pushing themselves, and they enjoy competition. These bills would deny these opportunities to transgender youth.”

Rep. Lee Snodgrass, D-Appleton, argued the proposals are chasing a non-existent problem and exacerbating a well-documented one.

A national survey of transgender youth released last year by The Trevor Project, a national nonprofit focused on LGBTQ youth mental health, found that more than half of transgender or nonbinary youth surveyed said they strongly considered ending their own lives in the previous year.

Transgender advocacy groups, Wisconsin Interscholastic Athletic Association, Wisconsin Education Association Counsel and the State Bar of Wisconsin‘s civil rights and liberties section have registered their opposition to one or both of the proposals.

Some legal experts have also questioned whether the bills would stand up in court. Last year, a federal judge in Idaho issued a preliminary injuction against that state’s law limiting transgender participation in sports. The American Civil Liberties Union brought that lawsuit.

A bill that would bar businesses from requiring customers to be vaccinated against COVID-19 was also approved by the Assembly on Wednesday.

The measure passed on a vote of 60-37, with Republicans voting in favor and most Democrats against. Rep. Sylvia Ortiz-Velez, D-Milwaukee, joined Republicans in voting in support of the plan.

Under the bill, government entities and businesses would be barred from requiring any person to provide proof of vaccination in order to receive services or enter a facility.

At a public hearing earlier this month, supporters of the proposal argued such measures infringe on individual freedom.

Ahead of the vote, one of the bill’s sponsors, Rep. Tyler August, R-Lake Geneva, said he believes getting the vaccine should be a personal choice.

“We also don’t believe that people need to share their personal health information just to go about their daily lives,” he told reporters.
age file-image-jpeg view-mode-embed_landscape clearfix”>
Opponents cite the public health benefits of more people being vaccinated and contend businesses should be able to impose such requirements, if they so choose. Hintz argued Wednesday the proposal sends the wrong message about vaccination.

“The overall impact of this rhetoric undermines our vaccination effort and our ability to recover from COVID,” Hintz said.

The plan has yet to be voted on in the state Senate. If approved, it could be vetoed by Evers. The governor hasn’t committed to a veto of the plan, but has said he believes “in some instances it is a reasonable request” for businesses, health care institutions and universities to require proof of vaccination.

This spring, the governor vetoed a Republican bill that would have barred the government from requiring people to get vaccinated.

Assembly lawmakers also approved a bill that would delay implementation of new district maps for some county and municipal elections in Wisconsin until 2023 or 2024, a move some Democrats and advocacy groups argue could spur lawsuits.

Under the bill, the deadlines for counties and municipalities to draw new election maps based on 2020 census data would be extended from this summer and fall until next spring and summer. Additionally, new local government maps, once they’re drawn, wouldn’t apply to city aldermanic elections until 2023 and county supervisor elections until 2023 or 2024.

The plan passed on a party-line vote of 59-38, with Republicans voting in favor and Democrats against.

Supporters of the plan say the extensions are necessary because of a delay in the federal government sending states 2020 census data. Under the initial government timeline, states would have received the data by March 31 of this year. However, because of delays brought on by the COVID-19 pandemic, the data isn’t expected until sometime between now and Sept. 30.

“You can’t draw the districts if you don’t have the data,” said Assembly Speaker Robin Vos, R-Rochester, during debate.

Opponents of the bill have raised concerns with the existing local election maps, which were drawn in 2011, staying in effect longer than they were intended to. They argue the plan, if it becomes law, will likely spur lawsuits and could pave the way for delaying new state legislative or Congressional maps as well.

The plan has yet to be voted on in the state Senate.

A spokesperson for the governor said his office is reviewing the legislation and reiterated previous comments from Evers that “bills making it harder for people to cast their ballots or to have fair maps in Wisconsin are likely going to be non-starters for him.”

Under one approved bill, police use of chokeholds would be banned statewide, except in life-threatening situations or in self-defense.

The change was recommended by a bipartisan task force on policing, which released its suggestions earlier this year. The task force was created last summer in the wake of widespread unrest following the murder of George Floyd in Minneapolis and severe injury of Jacob Blake in Kenosha at the hands of police officers.

The measure passed the Assembly on a voice vote. It passed the state Senate earlier this month. It now moves to Evers’ desk for his signature. The governor signaled Wednesday evening that he plans to sign it.

“These bills are a step, but we must take the next step—and the next step—if we’re going to continue making meaningful progress toward a more just, more equitable, and safer state for everyone,” he said in a prepared statement. “The people of Wisconsin are demanding systemic change and reform in our state, and there is much more work left to do.”

Another policing bill approved by the Assembly on Wednesday would study the prevalence of no-knock warrants in Wisconsin. Some activists have pushed for a ban on the warrants, arguing a study doesn’t go far enough. The bill passed the Assembly on a voice vote. It has not yet been voted on in the Senate.