New installations are going up around the city for the fifth annual public art exhibition. 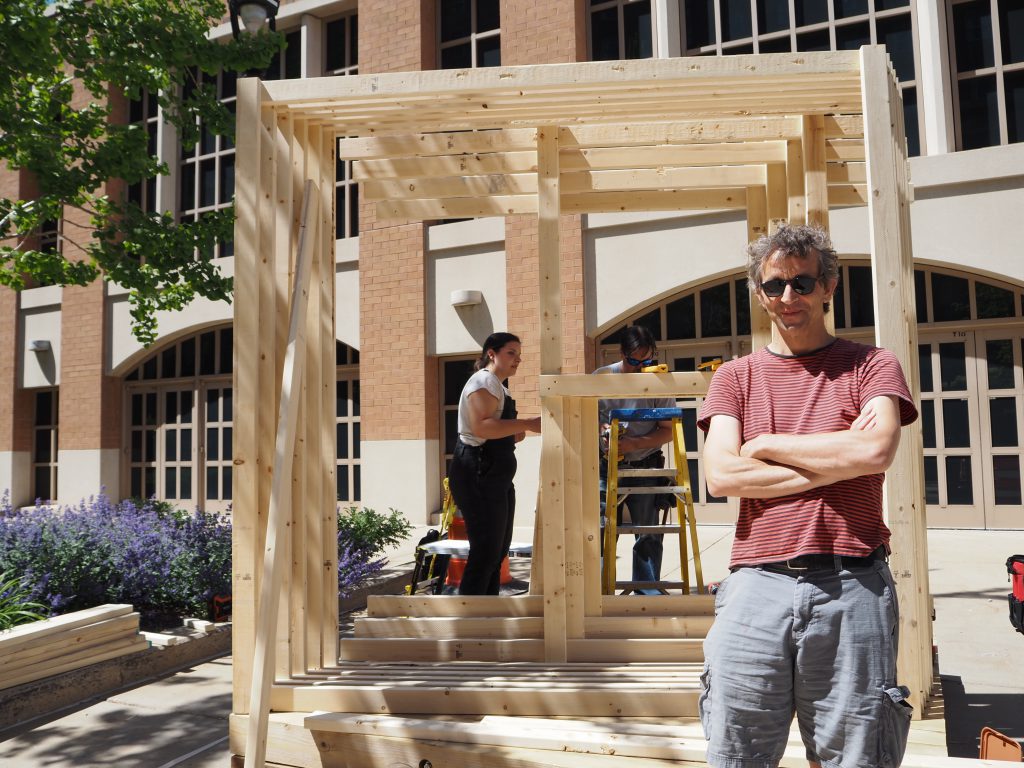 If you’re driving past the Wisconsin Center, that lumber you see isn’t there for new construction. It’s for sculptures.

One of the sixteen artists showing work this year is Matthias Neumann. The lumber on Wisconsin Avenue will become the latest piece in his sculpture series, “Basics.”

Neumann’s exhibit will be placed on 400 W. Wisconsin Avenue in front of the Wisconsin Center. Students from UW-Milwaukee’s School of Architecture and Urban Planning will help him assemble the piece. His piece will be on display through 2022.

Get a daily rundown of the top stories on Urban Milwaukee
The piece Neumann is showing for Sculpture Milwaukee is the 50th installment in his series he calls “Basics,” which he said is a “visceral expression of an extension of public space.”

Neumann uses untreated lumber for the piece. He said this material will change in appearance over the period of the installation, marking the passage of time. This, he explained, represents the “temporality” of the sculpture.

When the installation is over, as with most of his pieces, Neumann said he tries to have it “taken down and put back into the construction cycle, so it is 100% recyclable as well.”

Neumann will leave the interpretation of his piece up to the viewing public. “I don’t want to determine what people take away from the piece. But, I do want people to take away that there is an agency; that they have to negotiate for themselves on what they are doing with the piece.”

In fact, even Neumann is unsure what his personal take will be on the piece because it’s not yet finished. It’s important, he said, that each piece in the series “follows the material and forms a language.”

“But each of them is still unique so there is always a surprising aspect once it is done,” he said. “Each piece I have experimented with something new and with this piece in particular—it is going to be beautiful.”

This year’s exhibition is called “There is This We.” The name is drawn from the opening line of the poem “An Aspect of Love, Alive in the Ice and Fire” by Gwendolyn Brooks, the first Black poet to win a Pulitzer Prize.

This exhibition was co-curated by guest curators, Theaster Gates, a Chicago-based artist, and  Michelle Grabner, of Milwaukee. Gates was described by the Tate Modern art gallery in London as “one of the world’s most influential living artists.” Grabner is a recipient of a 2021 Guggenheim fellowship and an art professor at the Art Institute of Chicago. She has previously helped curate the annual program. Her piece “Untitled (2017),” featured in the 2017 exhibit, was permanently installed along the Riverwalk in the Historic Third Ward.