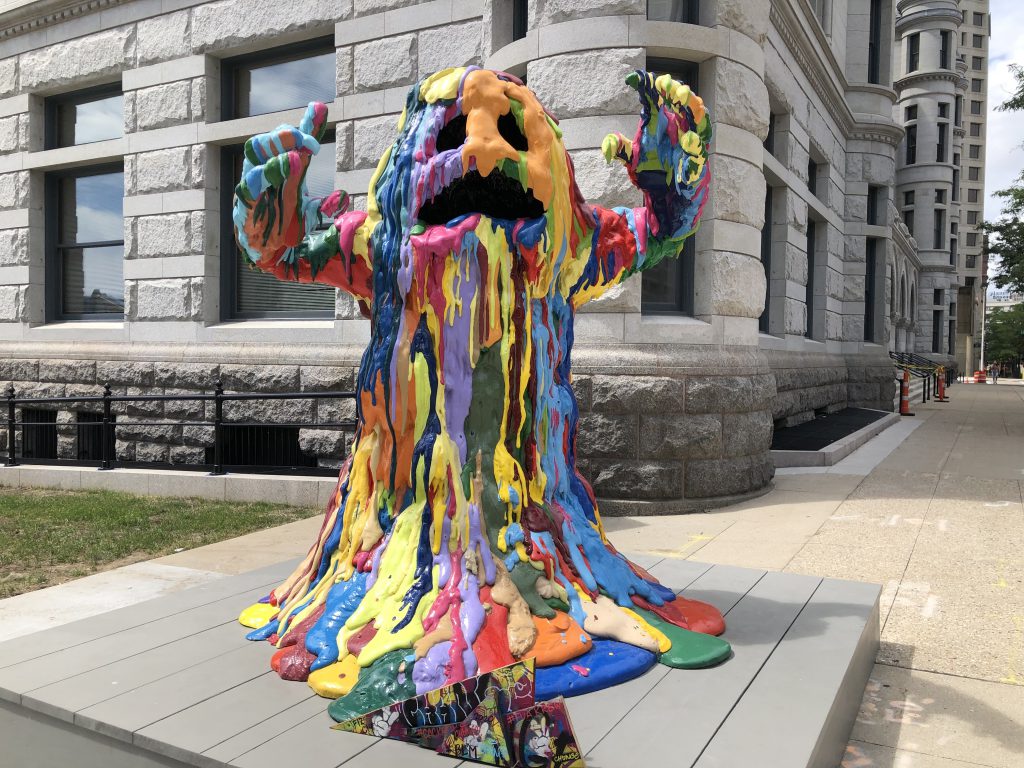 Sculpture Milwaukee, the free public art exhibit, will return for its fifth season, but with a new twist.

The seasonal exhibit, which lines Wisconsin Avenue through Downtown and now Broadway in the Historic Third Ward, will be installed starting later this month.

Guest curators have been hired, Chicago-based artist Theaster Gates and Milwaukee-based artist Michelle Grabner. Gates was described as “one of the world’s most influential living artists,” by London art gallery Tate Modern. Grabner is a recipient of a 2021 Guggenheim fellowship and an art professor at the Art Institute of Chicago. She has previously helped curate the annual program. Her piece “Untitled (2017),” featured in the 2017 exhibit, is now permanently installed along the riverwalk in the Historic Third Ward.

A titled exhibition has been added this year, called “there is this We.” The name is drawn from the opening line of the poem “An Aspect of Love, Alive in the Ice and Fire” by Gwendolyn Brooks, the first Black poet to win a Pulitzer Prize. The special exhibit will be in place through 2022, a year longer than most of the pieces installed as part of the seasonal exhibit.

“The poetics of perseverance and determination vibrate in the art that Theaster and I have selected,” said Grabner in a statement. “The exhibition’s title reflects the collective power of the works included in the 2021 exhibition, and honors a belief in social change through the provocations of the artistic imagination.”

“On the heels of the hardships wrought by the pandemic, as well as issues of racial inequities brought to the forefront via the Black Lives Matter social justice movement, Theaster and Michelle are inviting us to consider some incredibly challenging questions and give thought to how we intend to move forward as a community and as a country,” said nonprofit board chair Wayne Morgan.

A total of 15 sculptures will remain from the 2020 exhibit, including Carlos Rolón‘s use of the two-story Chase Tower glass lobby as a canvas for his diorama of tropical flowers, “Gild the Lilly (Caribbean Hybrid I, II, III).” Since the program’s 2017 inception, a number of pieces have been acquired and put on permanent display.

Gold’s piece will be permanently installed on the Milwaukee Art Museum campus. UW-Milwaukee students will support the construction of Neumann’s piece.

“We demonstrated last year we can safely create and implement a full, in-person cultural experience in the midst of the pandemic, while utilizing our unique exhibition to reflect and contribute to the most important community conversations. This has created a pathway for an even more robust experience in 2021,” said Sculpture Milwaukee’s executive director Brian Schupper.