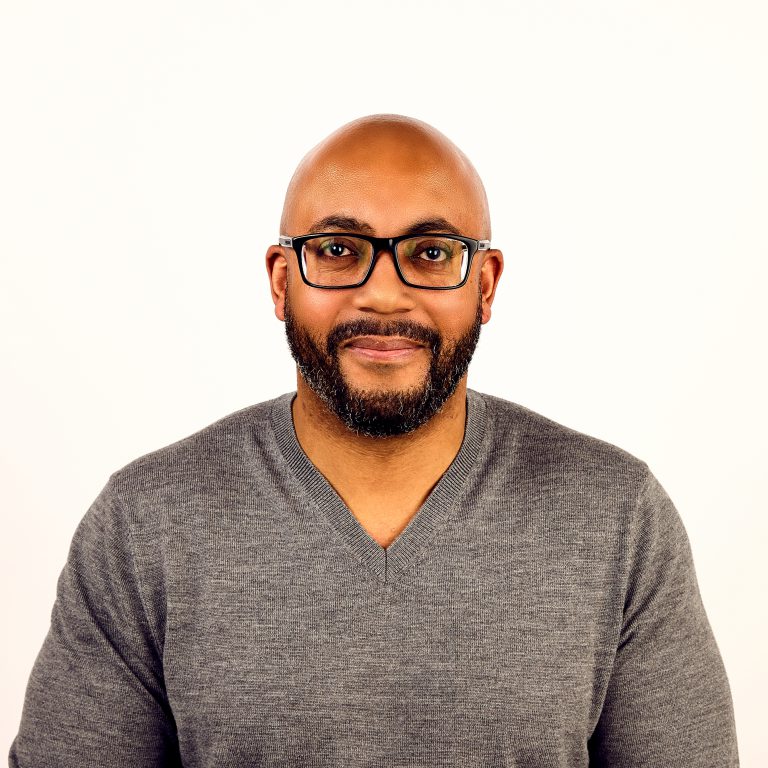 Awards are normally a cause for celebration. For Geraud Blanks, it’s a sign that he has more work ahead of him.

Milwaukee Film‘s 2021 Abele Catalyst Award was given to the organization’s new chief innovation officer this year, the first time in its eight years it has gone to an employee of the organization.

“I took the Catalyst Award as literally ‘this should be a catalyst to do even bigger and better things,'” said Blanks, 43, in an interview with Urban Milwaukee.

As a community member, he helped co-found the organization’s Black Lens program in 2014. He stewarded the Black-focused programming series as a seasonal employee while holding down a full-time job. It is now one of the flagship programming series included in the annual festival.

“I just worked nonstop even though I had a whole other full-time job,” said Blanks. He started pitching new ideas. “I think they started to look at me as more than this guy that comes in to do Black Lens during the festival.”

In 2019 he was hired for a full-time position and tasked with launching an entirely new festival, the Minority Health Film Festival. After two installments, it will be rebranded the Cultures & Communities Festival for its fall 2021 run. Blanks was also promoted to serve as the organization’s chief innovation officer in April.

The rebranded festival will be given a primetime slot in 2021. It trailed the existing festival by a couple weeks in its first two years, lessening its visibility. But the 15-day Milwaukee Film Festival was rescheduled to May in 2021, with the Cultures & Communities Festival getting fall to itself.

Get a daily rundown of the top stories on Urban Milwaukee
“It was sort of difficult to juggle the two. Now, with having the time, it comes with a lot more resources,” said Blanks, citing more staff, money and capacity at the Oriental Theatre. “With that separation, we are going to be able to build our own partnership and sponsorship space.”

“Within the next couple of years, the expectation is that this really becomes a premiere festival on the calendar,” he said.

But the vision isn’t simply to create another film festival.

“Imagine a multi-cultural festival. The core of it is film, but there are all these other events going on around it,” said Blanks. “Health and wellness is going to be at its core, but all sorts of lifestyle interests will be represented.”

Blanks thinks Milwaukee is ideally suited to host such a festival targeted at people of color. Its size and demographics hit a sweet spot. The city is not so big that the festival would be “just another thing.” It’s also already a majority-minority city, where more than 40% of residents identify as Black and 20% as Hispanic or Latino.

“There are all these sort of weird dichotomies about the city, both good and bad,” he said.

He compares the vision to how the South by Southwest Festival works in Austin, TX. While noting the plan isn’t to copy the technology, music and film festival, he said the goal is to create a growing, multi-faceted event that would draw people from across the country.

“If you make Milwaukee the center of the film universe for a week, I think that’s a big deal,” said Blanks. “That’s why I think the Milwaukee Film Festival is so spectacular. We are a top 10 festival in a city that doesn’t really have a film industry. I am really inspired by that.”

The 2021 Cultures & Communities festival will take place in September.

“We’re going to be really ambitious. We’re going to try to bring in a number of major speakers,” said Blanks. “I think this will be a glimpse of what the future could hold.”

He hopes portions of the festival will take place in person at the renovated Oriental Theatre. One of the things he hopes speakers can explore is the name of the theater itself.

“How should we look at this and should we re-examine it?” said Blanks, pitching a prospective session.

He hopes to show up to 15 films in person in addition to events across the city. “As many as the budget will allow,” said Blanks with a laugh.

He said the award, named for Milwaukee Film Festival founder Chris Abele, took him by surprise.

Organization CEO Jonathan Jackson started talking to Blanks about the award’s history during a meeting.

“He was running down the list of all the previous winners and I was a little confused,” said Blanks. “I wasn’t sure how I fit into the scheme of this.”

“It’s one of those experiences where someone gives you your flowers and you’re sort of surprised.”

His connection to Jackson can be traced back to their time studying at UW-Milwaukee. While studying in the film program, he met a series of fellow students: Jackson, future Milwaukee Film artistic district Cara Ogburn and Black Lens co-founder Donte McFadden. He also eventually fell in love with a name.

He praises Abele’s support for helping create a culture that allows him to take risks and advance important discussions. “I think it says to people, ‘okay, Geraud knows what he’s doing,” said Blanks.

Now he’s ready to show off the new festival.

“My hope is people will see this thing and be blown away, and start to ask what could this thing be?”