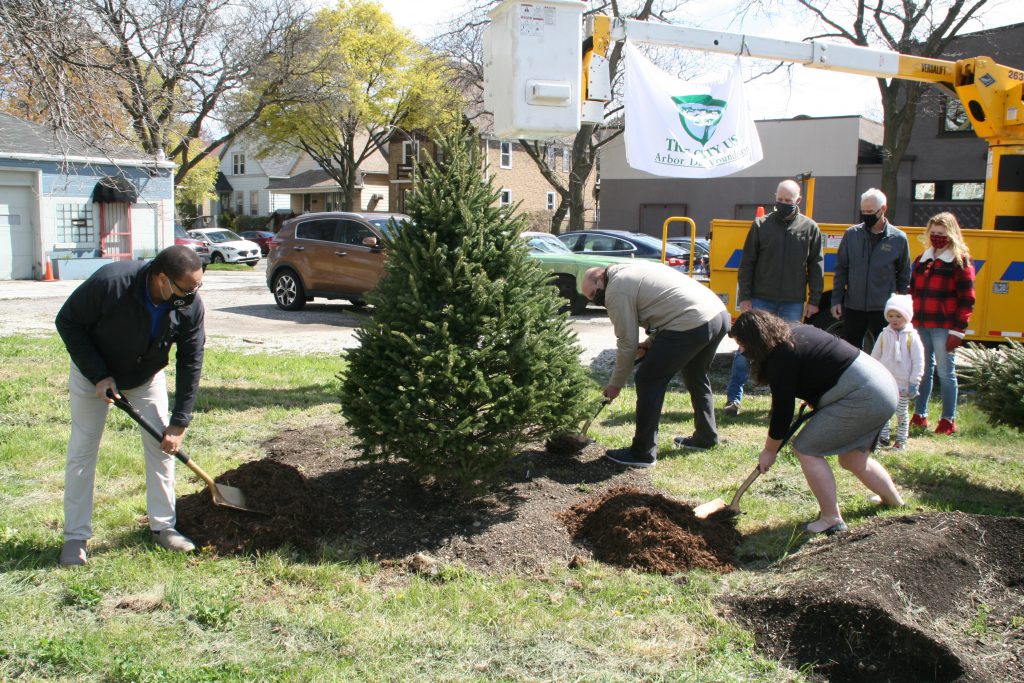 Leave it to Milwaukee to connect beer with Arbor Day.

The international tree-planting holiday is used as an educational event for area elementary school kids. And now it’s funded in part by beer.

For the 42nd-straight-year Milwaukee, and its 189,000 city-owned trees, was designated a Tree City by the Wisconsin Department of Natural Resources.

“The act of planting a tree represents hope and provides for future generations,” said Public Works Commissioner Jeff Polenske at a Friday morning event held along the Beerline Trail.

Black Husky Brewing used boughs from the city’s 2020 holiday tree to make a special edition of its Sproose beer, a double India Pale Ale. It then donated a portion of the proceeds to the City of Milwaukee’s urban forestry fund to support tree planting.

“Trees have always been part of my life,” said brewery co-owner Tim Eichinger, explaining that his grandfather and father both made their livings connected to forestry. But it was the sister of Eichinger’s wife Toni that helped bring things full circle.

A teacher at Milwaukee Public Schools Lincoln School for the Arts, her students would perform at the annual tree lighting ceremony outside Milwaukee City Hall. This inspired the Eichingers to use the tree, otherwise turned into mulch, to flavor their beer and donate the proceeds to the city to plant more trees.

The 2020 holiday tree, a 35-foot-tall spruce, came from Edward and Kathy Gill‘s northwest side home. Approximately 20 years old when it was harvested, the couple called it “Eddie’s Tree” in honor of their late son.

Get a daily rundown of the top stories on Urban Milwaukee
Sales of the beer raised approximately $1,200. Not nearly enough to fully offset the cost of planting 10 new trees along the trail, but hopefully the start of something bigger.

“I think we will begin to make it a bigger deal each year,” said Eichinger. “The donation is a big part, but you are also raising awareness.”

How do the spruce boughs end up in Sproose? Eichinger won’t say, instead leaving drinkers to imagine the magic that happens in the boil kettle.

Normally flanking the officials would be an array of students, but the pandemic has temporarily halted that practice. Instead, Cruz addressed her students who were attending via a live stream.

“At La Escuela Fratney we know the day you plant the seed is not the day you eat the fruit,” Crus said, just moments before the students were given a demonstration of how the city’s forestry division plants trees.

The officials ceremonially tossed mulch around one that was already planted.

Four spruce trees were planted along the trail segment northwest of the intersection of N. Booth St. and E. Concordia Ave. Six more were planted further northwest. Johnson took the moment to explain how his organization is leading a $7 million fundraising campaign to expand and improve the trail.

After visiting the new trees, you can follow the trail southeast to Black Husky at 909 E. Locust St. Those showing a COVID-19 vaccination card get a free beer. 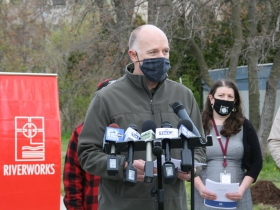 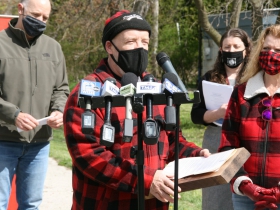 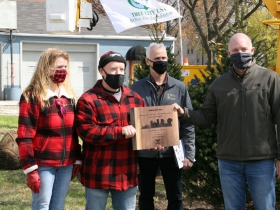 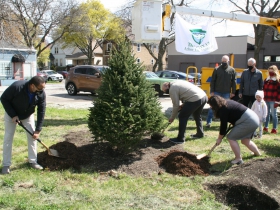