Will be used for highway traffic safety — and for protests.

By Isiah Holmes, Wisconsin Examiner - Mar 24th, 2021 06:27 pm
Get a daily rundown of the top stories on Urban Milwaukee 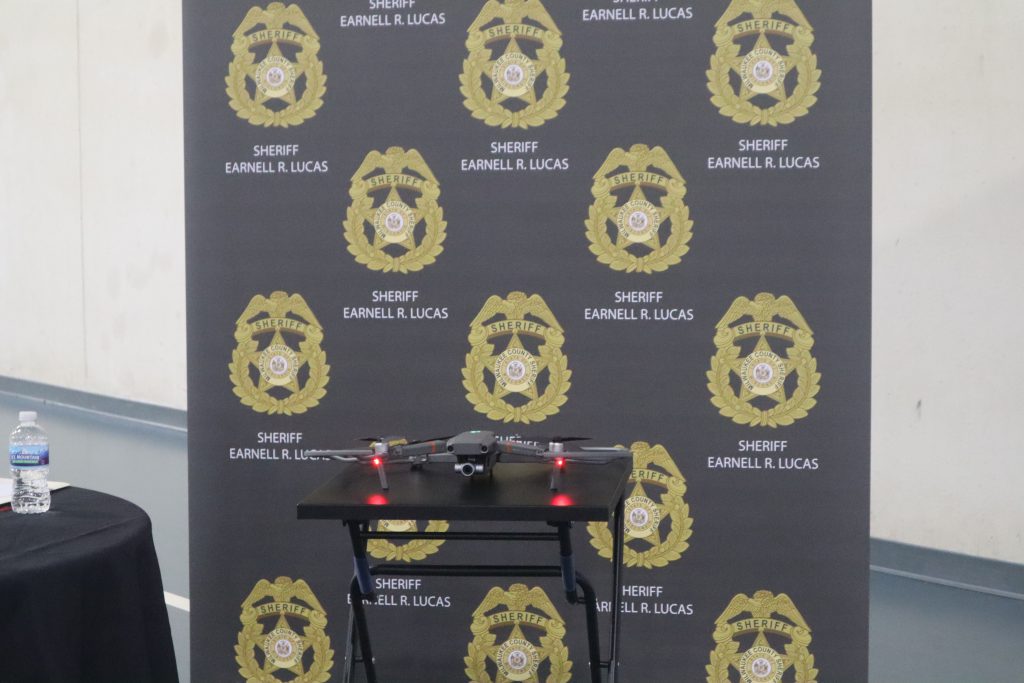 “We want to make sure we are doing everything right, protecting the citizen’s rights along with protecting the sheriff’s office as well,” said Sgt. Andrew Bilda, who commands the newly formed aerial drone unit at the Milwaukee County Sheriff’s Office.

At a press conference Tuesday morning, the Milwaukee sheriff pitched the new unit as a useful tool for situational awareness and public safety. Bilda said that the unit’s goals are to “increase officer safety by utilizing the drones to map crime scenes, crash scenes and providing an overall aerial view of a developing incident in real time.”

Equipped with multiple camera systems including forward-looking infrared technology (FLIR), the drones will also aid in tracking and locating fleeing suspects. The drone’s aerial view “can assist command personnel in our decision-making process,” Bilda said. The sheriff’s office currently has two DGI Maverick drones, one of which uses FLIR. Bilda said the sheriff’s office hopes to use information from the drones to “get real-time updates to the command center. Because they can view the footage, they can make critical decisions as to what maybe needs to happen next.”

During a flight demonstration, the FLIR proved powerful enough to detect body heat and movement through a closed metal door. Bilda said that capability will be helpful in finding people among the dense tree cover in Milwaukee County parks. In “a lot of areas with a lot of trees …  there are times where maybe a subject gets lost or fell and got hurt and now the drone can go up … And FLIR technology can find the person so that now, officers know how to get to that person safely and quickly.”

Capable of flying some 400 feet in the air and at a maximum speed of 70 mph, the drones can operate five miles away from the pilot. Small and versatile, the devices are also automatically able to navigate and avoid obstacles. Each unit set-up costs about $400. The drone’s cameras also have an “active track capability,” the sergeant added. “So you’d use that, for example, let’s say there’s a fleeing subject and the drone was in the air, you could track that fleeing subject with the drone, so that officers could now safely get to that person.”

Bilda noted that drones can help in the evaluation of scene evidence and increase highway traffic safety, using a mapping program that can take measurements to within three-tenths of an inch. “Now when we have to map, say, a fatality or crash scene, that’s less time that we have to keep the freeway closed. Which is less chance of a crash happening while people are diverted off the freeway.”

Bilda said a drone helped in a pile-up involving 53 cars and several semi-trailers in Michigan. “They were able to utilize the drone to get an overall perspective of the crash, and it aided in forming the best possible emergency response,” he said. “In this particular case, it involved 20 different agencies.”

Bilda told Wisconsin Examiner that the drones do not have the ability to gather signals or information from cell phones, or to record audio. However, the devices are equipped with a speaker system that allows sheriff’s office personnel to communicate to subjects. The drones would also be useful in a protest situation, Bilda said, if groups of people were close to a freeway. We can see if they’re by the freeway so that we can deploy squads safely and shut areas of the freeway down, to keep everybody safe,” he said.

During the frequent protest marches around Milwaukee in 2020 protesters took to the freeway multiple times. The Milwaukee County Sheriff’s Office responded each time with mixed success. Protesters and privacy advocates expressed concern about drones spotted during the curfews in Milwaukee, Kenosha, and Wauwatosa and their use in seemingly targeted arrests of specific activists.

In November, the Milwaukee County Board of Supervisors debated budget priorities and police equipment when it faced a $42.5 million budget gap.

Funding for human services was on the chopping block. The county asked the public to participate in the budget process using a budget-balancing tool, which served as a survey of community priorities. Among those who participated in the balancing tool exercise, 70% wanted to balance the budget by re-allocating funds away from the sheriff’s office to help fund human services. Measures that were introduced to achieve that goal did not pass.

The sheriff’s office expressed hope that its public announcement about the drone unit would be seen as a move to build confidence in the office’s  transparency with the community.

Bilda told Wisconsin Examiner that there are limitations to how the drones can be used. “Basically, it cannot be used for things like spying on people,” he said. “And anything that would violate somebody’s Fourth Amendment rights, that applies to this as well.” He added that privacy concerns are something which “we understand, because you have to balance being able to get the information and balance that privacy.”