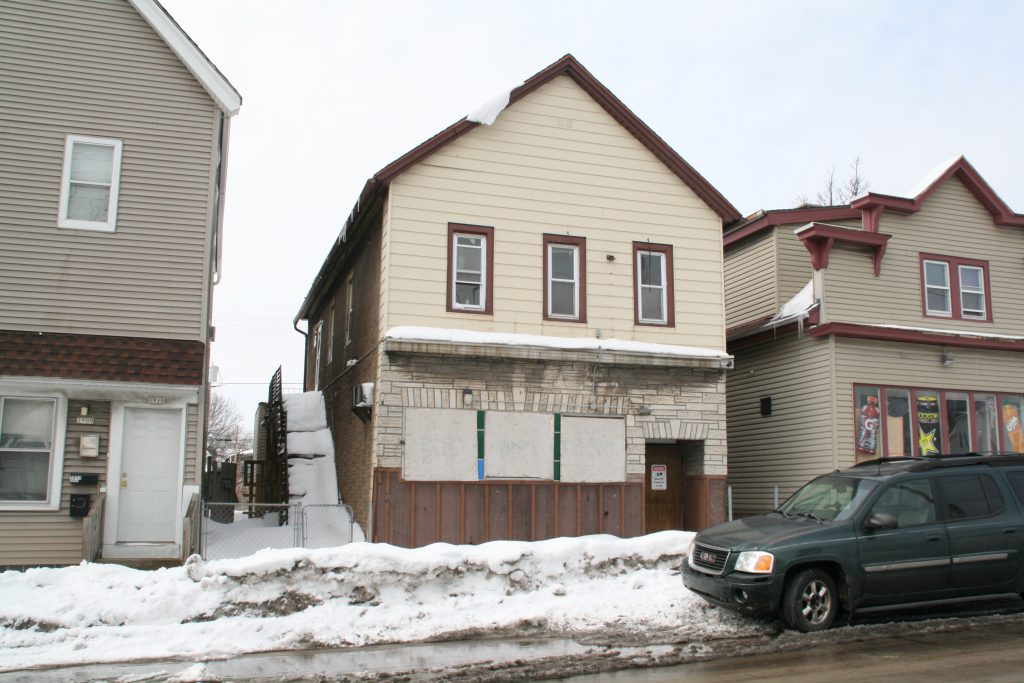 A growing real estate firm is buying its third formerly tax-delinquent property from the City of Milwaukee. This time it’s a former bar just south of Historic Mitchell Street most recently known for cocaine trafficking.

Business partners Jeff Musa and Jose Pimienta will purchase and renovate the two-story building at 1905 S. 6th St. The building could end up being refurbished as a home for veterans.

The two started acquiring properties in 2017 through their company, BVRC Properties. City assessment records indicate they currently own 11 properties, all on the South Side.

They know the area. Musa and Pimienta are graduates of Bay View High School. Both now work at Peoples State Bank, Musa as the Milwaukee market president.

Their latest acquisition, for which they’ll pay $10,000, is similar to many other turn-of-the-century commercial buildings. The 2,1230-square-foot building has a commercial space downstairs and residential space upstairs. But the interior layout is more akin to a rooming house than a traditional apartment building.

“This property has kind of a unique design upstairs, there are five bedrooms, no living room, just a kitchen and bath,” said Pimienta to members of the Zoning, Neighborhoods & Development Committee on February 23rd. “The commercial space is a former bar with big open space with additional bathrooms.”

Pimienta said the partners, at the suggestion of a veterans advocacy group, are considering converting the building to housing for military veterans. The first floor would become common space for the upstairs apartments.

If that doesn’t happen, Pimienta said the building would be maintained as a mixed-use property. A single-family apartment would be created above and an office or retail user would be sought for the first floor.

Get a daily rundown of the top stories on Urban Milwaukee
A Department of City Development report says the partners would invest $95,000 in the property’s renovation, including a complete interior rehabilitation as well as installing new siding and repairing the roof.

“As my memory recalls, this was a nuisance bar that was actually taken to court over drug dealing,” said Alderman Jose G. Perez, who represents the area and is sponsoring the property sale. No court case was found directly involving the former bar, but the city did take action against the establishment.

The council revoked the license for Palomas Place in 2016 after police busted the place for drug trafficking multiple times.

Then-assistant city attorney Nick DeSiato said five undercover purchases of cocaine were made at the business before a search warrant was executed in early 2015. The search turned up bagged cocaine and methamphetamine stored throughout the bar and 29 bottles of alcohol for which appropriate receipts could not be produced. More than $16,000 in currency, which had a narcotics odor confirmed by a drug-sniffing dog, was recorded at the tavern and the neighboring apartment building, 1901 S. 6th St., owned by bar owner Jesus Gamez.

The day after the warrant was executed, the Milwaukee Police Department received a tip that dealing was again occurring at the bar. The department made three more undercover buys and then executed another search warrant. More drugs were found, as well as 99 bottles of liquor for which a proper purchase history could not be established.

Gamez did not contest the council moving to revoke his license.

The city then stepped in to acquire the building through property tax foreclosure in 2019. Gamez had owned the property since 2005. He sold the neighboring building for $120,000 in 2019.