Lessons From an Inner City School

Next Act Theater’s ‘Principal Principle’ is an edgy look at a new teacher trying to make good. 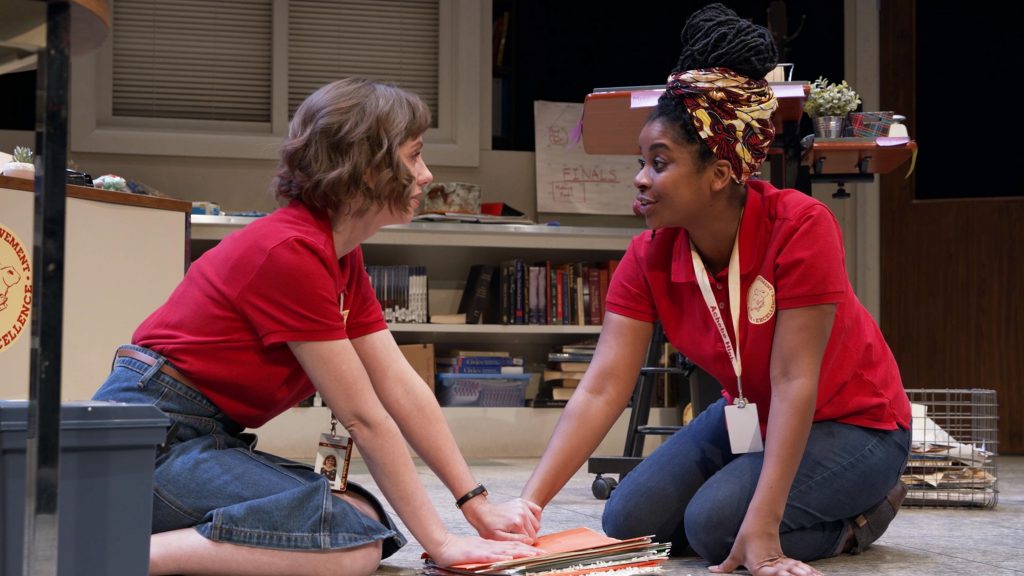 In 2014 when seasoned teacher and budding playwright Joe Zarrow wanted to dissect K-12 education, particularly the high school variety, he hit the hot issues and some still lingering sores in Principal Principle, now getting its Milwaukee premiere. It’s an online production that you’d swear was taking place at Next Act Theatre’s attractive home stage, and will play through March 7.

With some introductory still footage of local school interiors and exteriors, the production moves like a skillfully edited video into the stage set that looks like a teacher’s lounge and occasionally shifts into a private office or the microphone room where Ruby (the meticulous deliberately annoying Malkia Stampley) repeats every announcement twice to drum them into the high school students (and the invisible audience). Only an occasional pitch switch in voices from hidden mikes reminds viewers of the pandemic outside, so naturally does the cast of six weave around each other under director Marti Gobel and videographer Timothy Moder. They try to retain the illusion of a stage while making a pretty attractive video version.

The centerpiece is April Paul as the new English teacher, fresh from a corporate background and Teacher Corps two-year training. She is seeking wisdom from a crusty but snappy old timer (fine warm work by Flora Coker), the get-along motherliness of a veteran survivor (played with telling looks by Ericka Wade) and a blunt and clearly brilliant black activist happily scorning corporate policy to help her kids. The activist part seems to suggest a flame-thrower personality but Malaina Moore plays convincingly against type with side looks and soothing finesse – until the entire learning experience erupts around the forced instruction to teach Huckleberry Finn.

But Huck is not the main target in this inner city school until the end. Zarrow is using the amusingly empty Orwellian corporate language of the education industry overseers now controlling the school system, requiring teaching to their standardized test enforced by failed teacher Ms. Wei (Megan Kim), now elevated to bureaucratic quisling. Kim, with pointedly stiff delivery and crisp gestures, comes across as hateful as the plot needs while Paul, a good actress, is forced all over the map by the plot – is she starring in Goodbye Mr. Chips or Who’s Afraid of Virginia Woolf? Her character of Kay Josephs must range from cheerfully inadequate to angrily naïve to outrageously determined, yet so eager to get along that she’s dangerous.

But the principle concerns of the K-12 world have changed in the last year as the hot button of the pandemic has split all camps over President Biden’s efforts to reopen schools and the CDC guidance that schools, if appropriately ventilated and heeding protocols, can reopen whether teachers and students are vaccinated or not.

While Zarrow wrote intelligently – and angrily – about how teachers were no longer being listened to by corporate America, the pandemic has put teachers in the front seat. Suddenly the teachers have safety concerns that elevate them, unlike the Chicago of 2014 Zarrow was writing about. Suddenly the play is arguing about things that are still important, but not first on the audience’s minds. The fine pacing by director Gobel, the interesting if wordy arguments the teachers are debating, the contemporary insights that would forgive overwriting – none can compensate for a feeling the play is now out of touch.

And missing at the same moment are the live audience’s knowing chuckles, the sense of your neighbor interacting with an interesting debate, the visceral shock through the crowd from sudden revelation – all cannot be replaced on your computer or smart phone. That said, the instructions about how to access are pretty easy at nextact.org and the production does have its strengths. 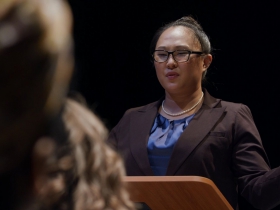 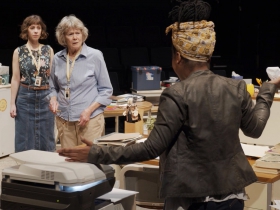 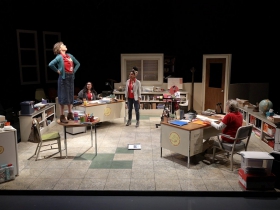 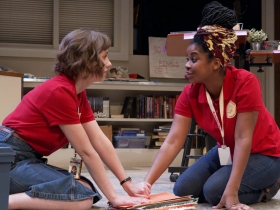 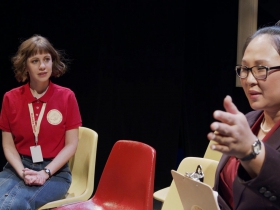 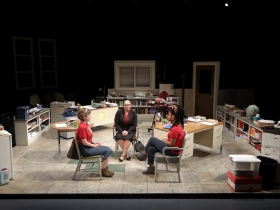