Natural Resources Board requires companies to pay more for permits, notify nearby tribes of any proposal.

By Danielle Kaeding, Wisconsin Public Radio - Jan 27th, 2021 05:35 pm
Get a daily rundown of the top stories on Urban Milwaukee 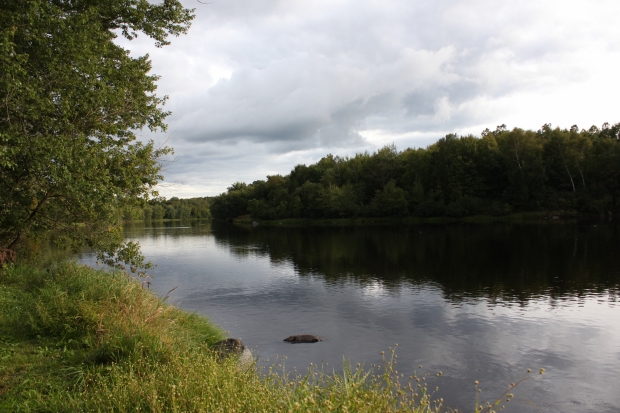 This body of water was once the site of the Flambeau Mine, which is the only nonferrous mine that has operated in Wisconsin in the last 40 years. Rich Kremer/WPR

New rules governing sulfide mining in Wisconsin were unanimously approved Wednesday by the state Natural Resources Board. The regulations would make mining companies pay more for permits and licenses, as well as outline areas that are considered unsuitable for mining.

The changes are part of proposed new permanent rules for nonferrous metallic mines that extract sulfide minerals like gold, zinc and copper. The rules aim to comply with changes as part of a 2017 law that repealed the state’s decades-old mining moratorium. The moratorium required companies to prove other mines operated and then were closed for 10 years without causing environmental harm.

Industry officials and Republican lawmakers hope the law will open the door to a billion dollar industry, while environmental groups fear it will lead to water contamination.

The proposed rule changes are estimated to increase costs for mining companies by about $502,000 over the life of a project, according to board documents. The DNR proposed increasing exploration fees and costs for the regulatory review of projects. The rules also require increased reporting and more detail in operation and construction plans.

Nathan Conrad is the executive director of the Natural Resource Development Association, a pro-mining group formed just before the state’s mining moratorium was repealed in 2017. He said his group supports the board’s decision. Conrad said he doesn’t think the additional fees will be a prohibitive factor for companies interested in Wisconsin developments.

“It provides a lot of clarity to ensure that we can create an opportunity for potential for mining in Wisconsin, but to do it in such a way that continues to uphold the good environmental standards we have followed,” said Conrad.

Under the changes, the state must also notify tribes of any proposed sulfide mine that’s near their reservations or affects land where they have federal treaty rights.

The board delayed action on these rules at its December meeting after concerns were raised that some tribes may be omitted from receiving notification of proposed mines. State regulators would be required to notify tribes whose reservation boundaries are within 60 miles of any proposed mine or tribes that have federal treaty rights in the area of a proposed project.

Tina Van Zile, environmental director for the Mole Lake Band and Sokaogon Chippewa Community, said the tribe appreciated the opportunity to be involved in changes related to notifying tribes. But, she noted the Mole Lake Band continues to object to the 2017 law while recognizing rules must be put in place to comply with those changes.

“We hope the law and rules will adequately protect the land, water and air in the future because the decisions we make today affect the future generations long after we’re gone,” said Van Zile.

Attorney Rob Lundberg with Midwest Environmental Advocates spoke on behalf of 10 environmental groups, including the Sierra Club, River Alliance of Wisconsin and Wisconsin Conservation Voters. He said they feel the rules attempt to strike a balance, but they also continue to oppose the 2017 law, saying it “rolled back many important safeguards regarding mining.”

In a statement released after the board’s decision, Dave Blouin, Sierra Club-John Muir Chapter Mining Committee chair, said, “The approved mining rules are a minor improvement to a major rollback of regulations meant to protect public health and the environment from one of the world’s most polluting industries.”

The 2017 law repealed requirements on overseeing activities near wetlands and an irrevocable trust fund that pays for long-term care of a mine site into perpetuity. Under the new rules, those items will be removed. The Wisconsin Department of Natural Resources hasn’t updated rules for those nonferrous mine operations since the rules took effect in 1982.

The new rules prohibit mining in areas considered unsuitable for mining that include wilderness areas, state parks, wildlife refuges and wild and scenic rivers. The board approved changes that would require any areas that are considered deemed unfit for mining to be spelled out in state rules or law.

Wisconsin Manufacturers and Commerce, the state’s largest business group, expressed concerns at the board’s December meeting that the DNR would have too much authority to determine areas that are unsuitable for mining under the new rules, leading to changes that those areas must be outlined in state law. The group feared the agency would “unilaterally” designate land as unsuitable for mining, creating uncertainty for mining companies.

In a statement sent to WPR, WMC spokesperson Nick Novak applauded the board for amending the previous version of the proposed changes to require legislative approval of any new lands designated as unsuitable for mining projects.

“The rule advanced today brings needed clarity to the mining permitting process while maintaining very strong environmental protections,” said Novak. “WMC hopes our state can attract investment in metallic mining, and along with it, the high-paying and family-supporting jobs that are vitally needed in northern Wisconsin.”

Mining company Aquila Resources voiced support for the new rules at the board’s December meeting. The company said it’s seeking regulatory certainty before further exploring the Reef and Bend mineral deposits in northern Wisconsin. The company has said it may move forward with plans for those deposits in Taylor and Marathon counties as soon as 2021.

The DNR has approved only one nonferrous mine in more than four decades, which was the 80-acre Flambeau Mine located south of Ladysmith along the Flambeau River in northwestern Wisconsin. The mine stopped operations in 1997. The mine served as a catalyst for the state’s sulfide mining moratorium that was repealed through the 2017 law.

The new rules are subject to approval from lawmakers and Gov. Tony Evers.