Black History and the Trump Uprising

UWM professor traces the roots of a mob storming the Capitol with Confederate flags.

By Isiah Holmes, Wisconsin Examiner - Jan 18th, 2021 12:33 pm
Get a daily rundown of the top stories on Urban Milwaukee

Tear gas outside the United States Capitol on 6 January 2021. Photo by Tyler Merbler from USA, (CC BY 2.0), via Wikimedia Commons

Celebrations of one of the nation’s most revered civil rights leaders may be overshadowed by an aura of dread, as the nation continues to process the violent uprising that occurred in Washington, DC, on Jan. 6. The Martin Luther King, Jr. holiday is accompanied by further calls by pro-Trump groups for mass gatherings at state capitols, including Wisconsin’s.

The haunting irony of Confederate flags waving in the U.S. Capitol shortly before the King holiday does not surprise Dr. David Pate, associate professor and chair of the social work department at UW-Milwaukee’s Helen Bader School of Social Welfare. His studies particularly focus on Black history, development, and struggle in the US.

Pate provides a relevant piece of historical context for understanding recent events. “Right after slavery there was a Freeman’s Bureau,” Pate tells the Examiner, adding that the bureau was created to provide newly freed enslaved people with access to education, land and legal services. The nation was re-imagining itself, in a period of reconstruction.

“People were very much hoping to come together as a full country. But, over a short period of time, from 1863-1890, that was the one window where they were trying to equalize what was promised in the Declaration of Independence,” says Pate. “Those who were white and in charge just couldn’t handle that. They just did not see them [freed slaves and African American people] as their equal.”

Out of that resentment grew Jim Crow laws and subsequent decades of systematic segregation and oppression of the African American community. It’s a legacy that the country continues to struggle with today. And outgoing President Donald Trump, who has openly courted white supremacist groups, has tapped into that same poisoned well.

Within hours of Trump and Rudy Giuliani’s incendiary speeches on Jan. 6, a mob overran the U.S. Capitol. At least five individuals have died from that attack, including police officers. During the siege, Trump’s supporters were photographed looting and posing for pictures in the offices of lawmakers. The crowd’s potent symbols included Confederate battle flags and clothing with Nazi and racist propaganda. Meanwhile, some Capitol police officers are suspected of moving barricades and participating in photo opps with the rioters.

“I, like many people, had feared and heard there would probably be a march to the Capitol after the speech was given by the president,” says Pate, recalling the events on Jan. 6. “And as I watched his speech, I got more nervous and more uncomfortable that people’s lives were being threatened, and that my people’s lives were at risk. As they started moving towards the Capitol, I couldn’t believe that this was happening at this point in time.” 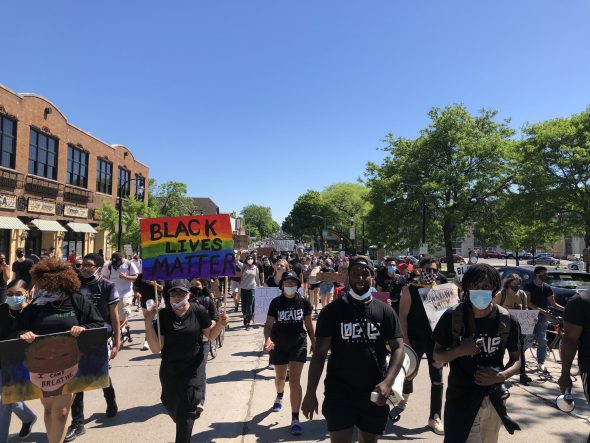 Pate assumed, based on the militarized reaction to Black Lives Matter and other left-leaning protests last year, that Trump’s supporters would be confronted by by legions of police and National Guard. “I had been following what was possibly going to occur up to the day it happened,” says Pate. “And I figured anyone with any type of intelligence would also be prepared with the right force. Because whenever there’s a peaceful march for Black Lives Matter, or any peaceful march, there’s generally been a presence of military and police force to manage the crowd.”

The contrasting responses, says Pate, show the country’s lack of true understanding of the impact of systemic racism. “We have a long way to go around race relations, equity, and inclusion,” says Pate. “It’s about how we look at race, how we treat race and the fact that since Reconstruction there’s never been a true effort to deal with equity and inclusion in this country.”

Pate points to multiple events where Black Americans’ attempts to prosper were met with violent reactions from the government and white Americans. He cites the murderous mob that razed “Black Wall Street” in Tulsa, Oklahoma, in 1921, and the history of lynchings throughout the South.

“This has been an ongoing pattern, where there’s a position of power, or privilege that is seen to be taken away from someone, particularly the white majority,” says Pate. “They had ways of instituting policies and practices that would not allow that. Wherever there has been Black prosperity, whites have come in and either burned it down, or made it difficult for those communities.”

Pate points to current examples of voter suppression as a continuation of that history.

“I think it’s a time for reckoning with what is our comfort level with race, as a topic area in this country,” says Pate. “There are documented, historical points where you can see that people who identified with issues of Blackness were treated in a way that unfortunately ended in harm and hurt. And oftentimes death.” Pate believes the events at the Capitol echo this troubled history.

Despite his worries about future racist attacks, Pate believes the incoming administration of Joseph Biden is taking steps in the right direction, including his cabinet picks, which include a number of people of color. “It’s going to make a big difference,” he says. “Based on the people he’s putting in place to serve our country around reconciliation and refocusing on positions of equality and inclusion, I think time will tell.”

One thought on “Black History and the Trump Uprising”