Protests expected by some, but Madison acting police chief says no credible threats so far.

By WPR Staff, Wisconsin Public Radio - Jan 17th, 2021 02:51 pm
Get a daily rundown of the top stories on Urban Milwaukee 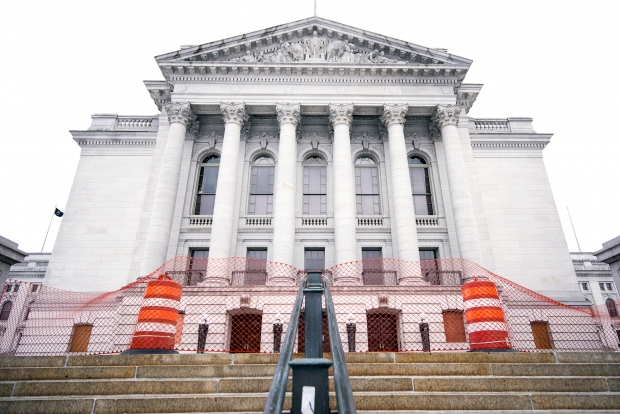 Cones and fencing are put up to block off an area outside of the Wisconsin State Capitol on Sunday, Jan. 17, 2021, in Madison, Wis. Angela Major/WPR

The state Capitol in Madison hasn’t seen signs of demonstration so far Sunday although many members of law enforcement are present in anticipation of protests that could turn violent amid the upcoming inauguration of President-elect Joe Biden.

In fact, with numerous streets closed off around the Capitol Square, the area has been much quieter than it would be on a usual day — no cars, and conversations can be heard from a block away.

Earlier this week, law enforcement officials in Madison said they were planning an “enhanced” presence around the state Capitol amid concerns from the FBI about armed protests at state capitals throughout the country. 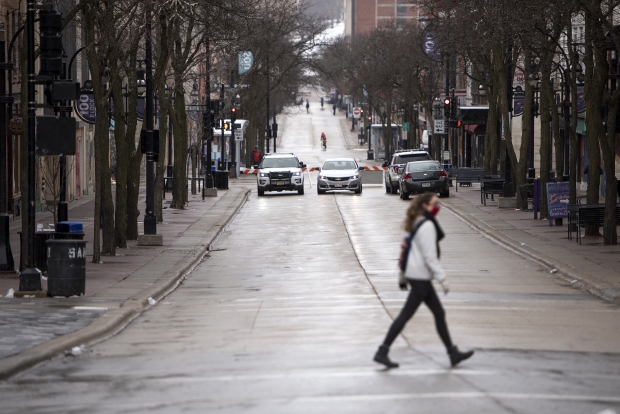 Governors in some states have called out the National Guard, declared states of emergency and closed their capitol buildings over concerns about potentially violent demonstrations.

These concerns come in the wake of the storming of the U.S. Capitol in Washington, D.C., by supporters of President Donald Trump earlier this month. The insurrection left five people dead, including a police officer.

Eerie silence. But I’ll take no activity over even a hint of violence. pic.twitter.com/9q71wZr2iV

Madison’s Acting Police Chief Vic Wahl said Thursday that there were “no specific, direct threats to Madison at this point.”

Amid the concerns, state Department of Administration officials issued a memo to members of the Legislature and other Capitol building tenants saying that additional security measures are being taken and encouraged employees to work remotely through the end of January. To that point, the Capitol’s lower-level windows have been boarded up with sheets of wood.

In addition, Gov. Tony Evers authorized the Wisconsin National Guard to support the Capitol Police in Madison in the coming days.

(At the same time, 500 Wisconsin National Guard troops were also mobilized to go to Washington, D.C. for the inauguration.) 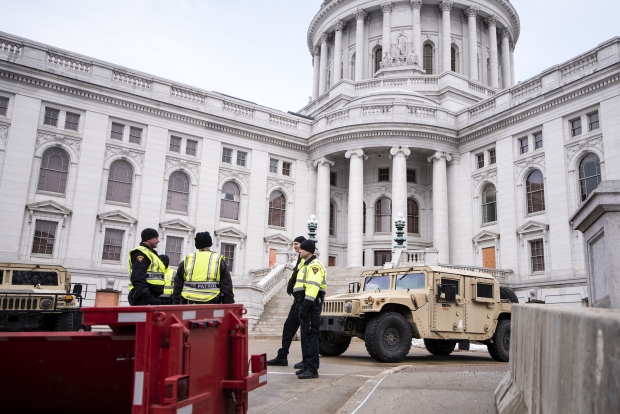 Authorities said that there could be blocked roads or other traffic disruptions near the Capitol and around the city’s downtown. They are also advising people to avoid the area if possible.

Earlier this week, Madison Mayor Satya Rhodes-Conway said she hopes the concerns will come to nothing.

“I am hoping that the week will pass without incident,” she said on Wednesday.  “But I want Madison residents to know that we are prepared.”

Aside from law enforcement, reporters and the occasional pedestrian, there was a group of four gathered at the Capitol Square, some holding signs that said “Jesus.” One member of the small crowd said groups, varying in size, have been coming to the Capitol every Sunday since Nov. 10 to promote their faith during a time of political uncertainty. 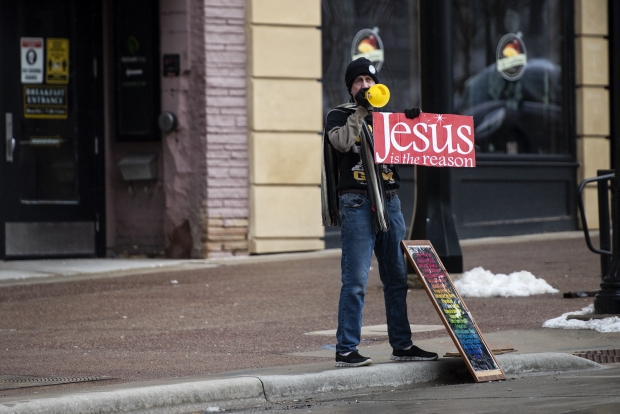 A man holds a sign and sings near the Wisconsin State Capitol on Sunday, Jan. 17, 2021, in Madison, Wis. Angela Major/WPR

Though the Wisconsin Capitol was quiet, some other states saw protesters, some armed. The Associated Press reported small crowds in Ohio, Michigan and South Carolina.

Some state legislatures have canceled or limited their work next week because of security concerns.