By Isiah Holmes, Wisconsin Examiner - Dec 8th, 2020 02:52 pm
Get a daily rundown of the top stories on Urban Milwaukee 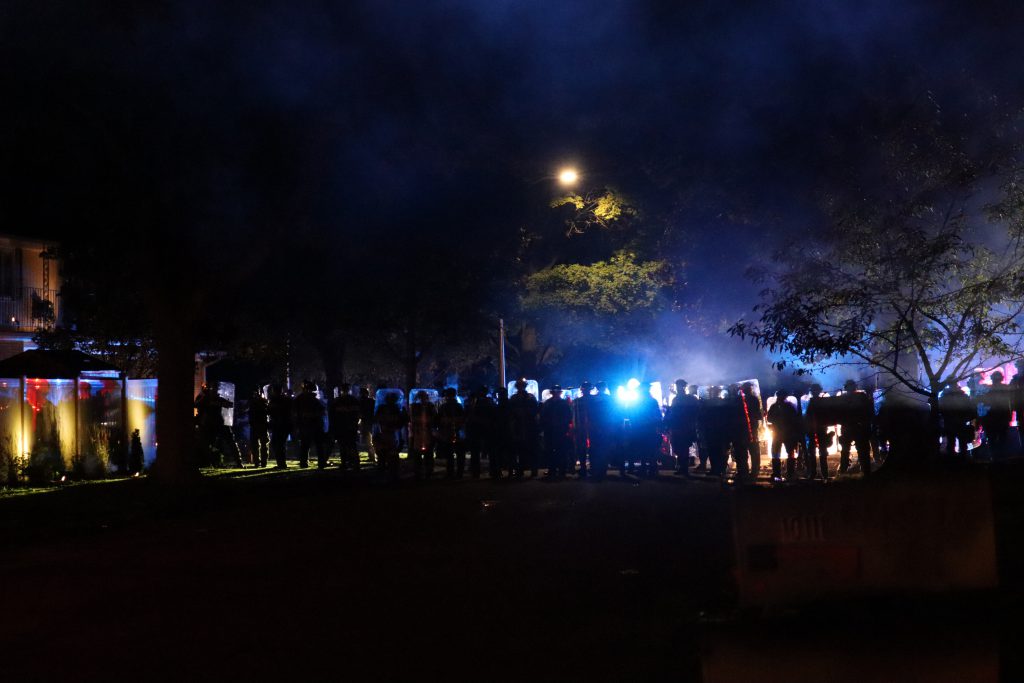 Police block a road during the October Wauwatosa curfew, after having just shot rubber bullets and tear gas at protesters and their cars. Photo by Isiah Holmes/Wisconsin Examiner.

“It was shocking really,” Attorney Lee Schuchart told Wisconsin Examiner, as he recalled grappling with the implications of how police had extracted data from his client’s cell phone, saved it for two months after closing their investigation, and then passed it off to another agency. “It was chilling, it was mind-blowing. I don’t think anybody truly understands what maybe they have on their phone. And the fact that police, if they get an extraction of your phone, really can access almost all of it.”

Wisconsin’s Supreme Court is now exploring those implications, stemming from the conviction of George Burch. As part of an investigation into a suspected hit-and-run accident, Green Bay Police Department officers detained Burch for questioning. “Something that we consider a fairly minor criminal traffic incident,” explained Schuchart, “maybe even a civil traffic incident. Just a normal traffic ticket. And during their investigation, they were led to George Burch. Mr. Burch denied being in the hit-and-run. And the officer investigating thought to himself, ‘Well maybe his phone has some evidence on it. Maybe it has some information like who he was texting at that time, or who he was calling.’”

Burch agreed to allow the officer to look at his texts to show that he wasn’t involved in the crash. What he didn’t know was that, rather than physically looking at his messages, the officers downloaded the entire contents of Burch’s cell phone. They couldn’t link him to the crash, and the investigation closed in June 2016. Despite closing the investigation, the department kept the data. Then, two months later, the data was shared with the Brown County Sheriff’s Office in an unrelated murder investigation. No warrant was needed and, using the cell data and other information, Brown County charged Burch with first-degree intentional homicide.

The privacy issues surrounding the case stood out enough that  the Wisconsin Supreme Court took the case. “These issues raise novel questions regarding the application of Fourth Amendment jurisprudence to the vast array of digital information contained in modern cell phones,” states the appeals court certificate for the case. Law enforcement have numerous technologies to access, intercept, retain, and analyze electronic data and communications. In the Burch case, the tech involved something similar to CelleBrite or Grayshift, which connect to phones with a USB cord in order to extract data.

“When police officers do a CelleBrite extraction,” said Schuchart, “they can pick where they go in the phone. You can essentially load it, and you can click on messages and you can limit your searches to those specific areas. And they didn’t in this case because they said they didn’t have to because it was consent. I disagree with that.” While the courts catch up to the technology, police continue to utilize these tools in a range of investigations. Activists and organizers who’ve been arrested while protesting under the banner of Black Lives Matter suspect similar technologies have been aimed at them.

A pocket full of intel, regardless of context 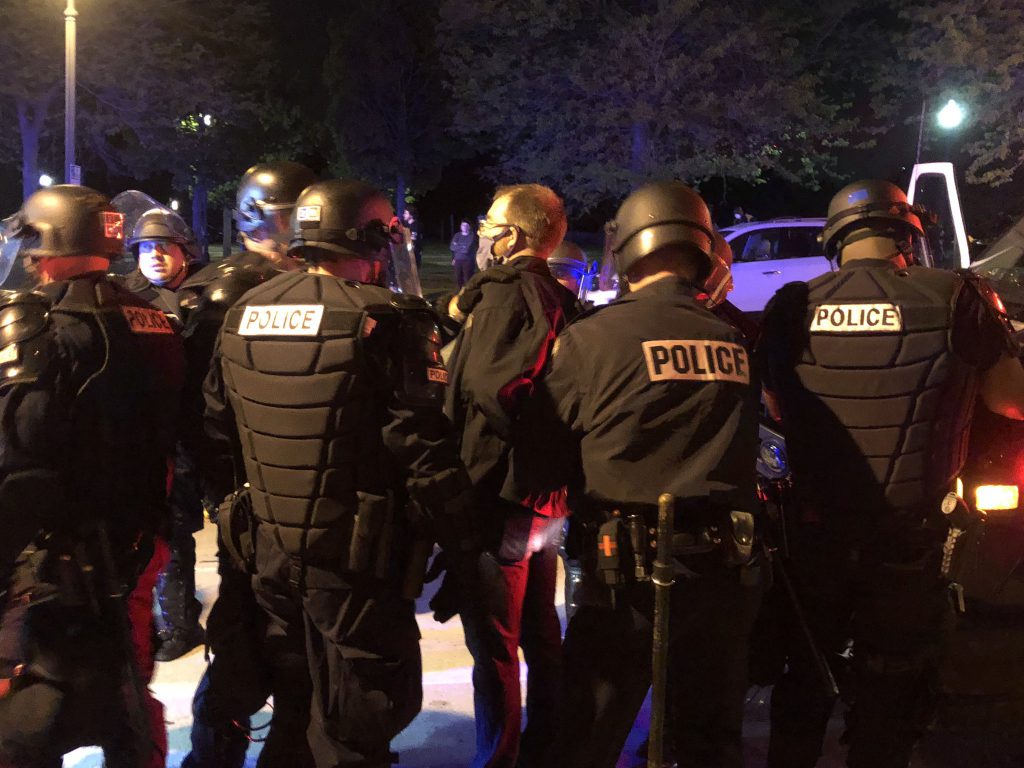 Milwaukee residents were among the first in Wisconsin to take to the streets following the death of George Floyd at the hands of Minneapolis police. With mass civil disobedience came riot police, drones, armored vehicles, a curfew, and scores of arrests. Among those arrested was Sup. Ryan Clancy (District 4), who’d been apprehended despite being immune to Milwaukee’s curfew as an elected official.

After being released he told Wisconsin Examiner, “at some point, they’d already taken my phones, and they asked me to unlock my phone so they could see who arrested me. And that threw up a lot of red flags for me.” Rather than attempting to determine who arrested a county supervisor, Clancy felt they were trying to “get access to the footage on those phones.” Earlier in the day, Clancy documented hours of the protests using his phone as an American Civil Liberties Union (ACLU) legal observer.

Schuchart feels it’s “very accurate” to compare the situations Clancy and Burch found themselves in. “The county supervisor ultimately denied consent,” he noted. “So law enforcement would have to get a warrant, meaning that they would have to have probable cause that a crime had been committed, and that there would be evidence of that crime on that phone.” Burch did not attempt to withhold his  consent, which made things easier for the police. ”So it’s almost more of a fishing expedition when they ask for consent,” says Schuchart.

Dozens of protesters and locals were arrested from Oct. 7-11, with many reporting that their phones were taken. Taleavia Cole, the sister of Alvin Cole, the 17-year-old Mensah shot, was among them. Cole was arrested alongside her mother and numerous others during the curfew. When she was released, Cole was asked what interest the police would have in her phone. “Maybe because I’m the sister of Alvin Cole?” She reasoned to press after being released, “everything’s in my phone.”

Protesters associated with The People’s Revolution also reported that officers were keen on taking the phones of specific members. Several were told by WPD that the phones wouldn’t be returned until they obtained a warrant to access them. Cole stated that she never consented to a search or seizure of her phone. On Oct. 15, her lawyers asked that the department produce a search warrant or return the phone.

The phone was released only when Cole’s lawyers took up a motion in the circuit court to order the return of Cole’s device. The motion noted that, “since Taelvia’s phone has been in the Wauwatosa Police Department’s possession, her Facebook and Instagram has disappeared. In addition to this, her iCloud account which has updated photos, many attorney-client privileged documents, and other pertinent information to which she has never consented a search has been tampered with.” The Wauwatosa Police Department has a specific unit, called the Special Operations Group (SOG) which, among other things, specializes in cell data recovery and analysis.

Despite such incidents, legal experts generally feel that the requirements for a warrant when consent is not given should protect protesters. “There are some pretty clear rules that do exist,” Keith Findley, professor of law at the University of Wisconsin Law School told Wisconsin Examiner. “Police can’t just seize people’s cell phones and access to data in them — typically without a warrant that requires probable cause that they’ll find something linked to a criminal investigation on those phones. And then it usually has to be limited to the scope of the warrant. There are a few exceptions for warrantless searches, but that’s pretty rare with cell phone data.”

Despite all the uncertainty Findley emphasized, “under current rules police can’t just be arresting protesters and taking their phones and searching them, without probable cause and typically without a warrant. There are rules to protect against that kind of thing. What’s more uncertain is when can police access the contents of a phone under circumstances like those in Burch, where consent was arguably given, where they take the consent and search broadly, where they then retain the data, where they then search it again.”

The Burch case raises a tell-all question in the professor’s mind. “Does traditional consent doctrine work anymore?” asked Findley. “Is it good enough anymore to allow a general consent to open the door so that law enforcement can look for everything about you on your cell phone. Or does the massive amount of data there mean that consent needs to be more specific, more clear cut or tailored when we’re talking about opening people up to that kind of invasive inspection about everything that’s personal and private about their lives.” Findley added, “that’s just something the court is going to have to deal with.”

The law has been outpaced by technological advancement, and the ambition of police to conduct and complete investigations. At the end of it all, we’re left to ask what, if anything, citizens can do to protect their privacy. Using Clancy’s detention and the Burch case as examples, Schuchart highlighted several key facts.

“Because the supervisor declined to allow the officer to search his phone,” said Schuchart, “there was obviously no probable cause that there was evidence that a crime had been committed on that phone. No search warrant was granted, so they couldn’t get into that phone. In Mr. Burch’s case, he consented.”

Schuchart added, “I think the general public doesn’t realize that police officers are allowed to lie to the citizens. They’re allowed to lie to your face to further whatever investigative purpose they’re trying to complete. So if the officer had been lying to the supervisor because really he wanted to get the videos of the other people who were present so they could make some sort of list, if the supervisor had consented, he would have been able to do that. He would’ve been able to extract all the information from the phone and look at the text messages, maybe between the supervisor and the other people that were there.”

Clancy was immune to Milwaukee’s curfew, but few were exempt in Wauwatosa. Press and ACLU legal observers were threatened with arrest during the first couple of days of that curfew, and protesters who fled in car caravans certainly weren’t exempt either. Regardless of what police feel they’re allowed to do in the moment, Schuchart stressed that never giving consent is one of the few protections available to the common marcher. Beyond the marches, the issue of cell data collection by local police raises deeper concerns.

“I think that as technology evolves,” the attorney reflected, “and as a society we continue to store more information on our cell phones, and for longer periods of time, I think the possibility of leaving a complete footprint of who you are and the entire privacy of your life on that device is absolutely possible. And as technology evolves, so will law enforcement tools. And they’ll be able to capture that information and have all that information against us. The government can do that and again, they don’t have to tell you the truth when they’re meeting with you. So they can come and get that information from you, and it may be completely unknown to you why they’re doing it.”