By Isiah Holmes, Wisconsin Examiner - Nov 28th, 2020 10:08 am
Get a daily rundown of the top stories on Urban Milwaukee 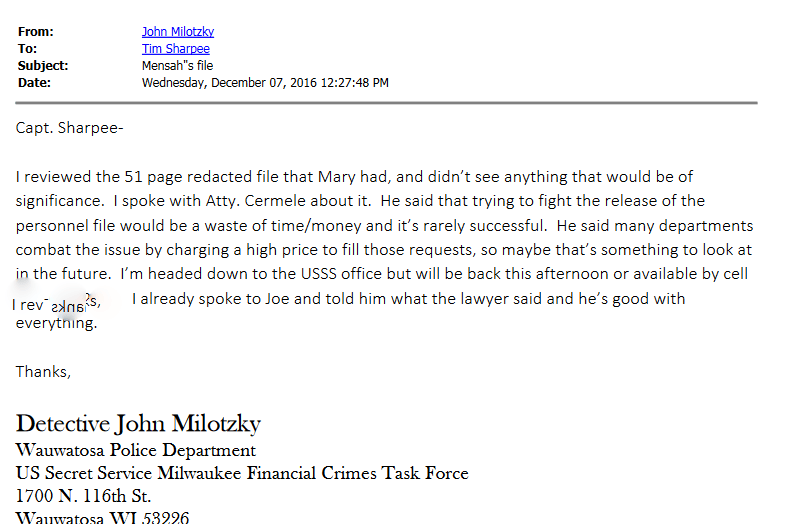 The email, with a personal phone number redacted, sent from John Milotzky in 2016. The email was sent two days after Officer Mensah was cleared of the Jay Anderson shooting. Photo by Isiah Holmes/Wisconsin Examiner.

The American Civil Liberties Union of Wisconsin (ACLU) has issued a series of statements condemning an internal email sent by personnel at the Wauwatosa Police Department (WPD) in 2016. Sent from Detective John Milotzky, who also serves as president of the Wauwatosa Peace Officers Association (WPOA), the email discusses the possibility of charging high fees as a way of discouraging  open records requests.

In a statement, the ACLU specifically cited the Wisconsin Examiner’s reporting of the email. “Charging the public outrageously high costs to request records about the police shooting of Jay Anderson, Jr. is not only unlawful, but shows the gross disregard and lack of respect that the Wauwatosa Police Department continues to have for the community it is tasked with protecting and serving,” said Molly Collins, advocacy director for the ACLU of Wisconsin.

Collins also notes that, “it appears that the Wauwatosa Police Department sought legal advice from a police union lawyer on a municipal law issue, like open records, when the city has a city attorney whose job is to advise departments on municipal law matters.” Describing the tactics by WPD as “dishonest” and “a red flag” showing poor leadership Collins declared the department, “will never earn the trust of people if its officers are willing to deliberately suppress possible evidence of police violence.”

In the email, Milotzky mentions discussing the release of Officer Joseph Mensah’s personnel file. The document was requested during the investigation into the Anderson shooting, the second fatal incident involving Mensah. Milotzky, who was emailing a WPD captain, noted that while refusing to release the file would be pointless, charging high fees for such requests is a practice WPD should look into in the future.