How Will Legislature Investigate Election?

And will legislators subpoena election clerks, using this power for first time in more than 40 years? 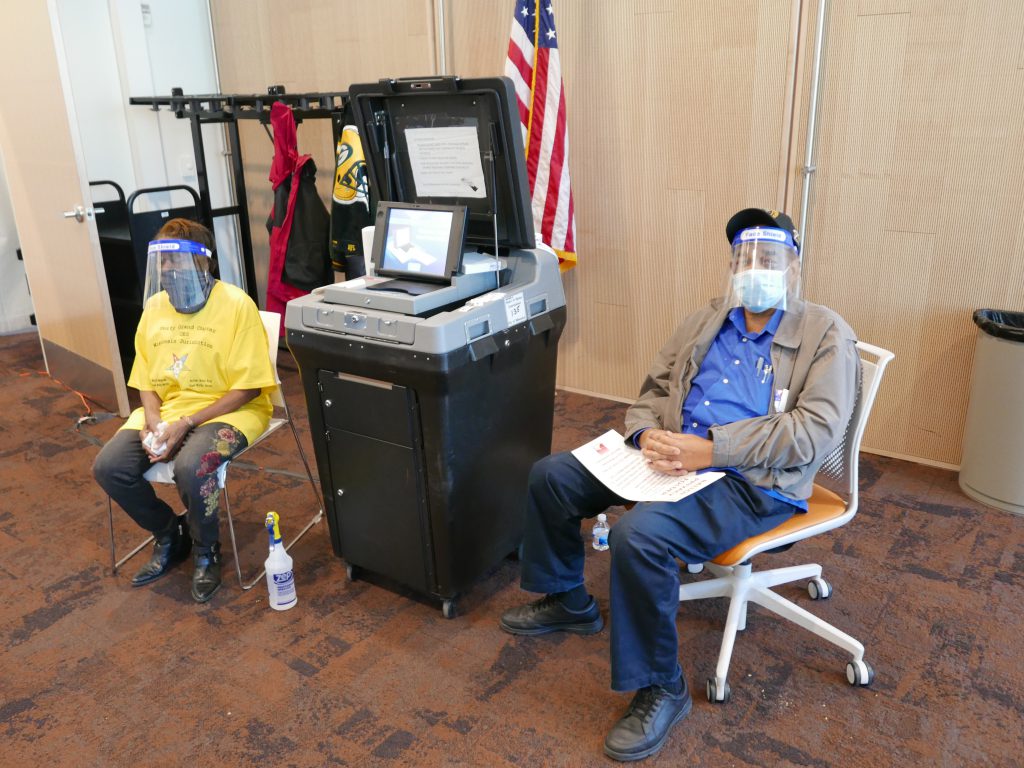 Lewis Tribune, right, has worked elections for past 20 years. Photo by Graham Kilmer.

State Senate and Assembly committees overseeing election laws will hold a joint session this week on how Wisconsin’s record 3.2 million votes for President were cast and counted on Nov. 3-4.

It’s a good idea, if legislators focus on the process — and if Republicans who run the committees don’t dominate that session by inventing theories of how Democrat and former Vice-President Joe Biden didn’t really win the statewide vote by an unofficial margin of about 20,500 votes.

That was a winning margin of 0.6% of the record 3.2 million votes cast — the same razor-thin percentage by which President Donald Trump won Wisconsin in 2016..

Assembly Speaker Robin Vos, who will be the most senior GOP leader in the Capitol when Senate Majority Leader Scott Fitzgerald resigns to go to Congress, first demanded that the Assembly Campaigns and Elections Committee investigate the election, citing allegations of irregularities. Vos noted that the committee, chaired by Rep. Ron Tusler, an Appleton personal injury attorney, has the authority to subpoena witnesses – something that the Milwaukee Journal Sentinel reported hasn’t been done by a legislative committee in at least 40 years. “I think it’s unlikely that we would find enough cases of fraud to overturn the election, but I don’t know that,” Vos told the newspaper. “That’s why you have an investigation.”

Besides Trump’s loss in Wisconsin, two Assembly Republicans from suburban Milwaukee lost re-election bids. Republicans will still control the Assembly by a 61-38 margin. Senate Republicans picked up two seats, giving them 21-12 control in the session that starts in January.

Subpoenas shouldn’t be required. Why? Because Wisconsin’s army of local election officials — 1,850 of them, the most of any state — are eager to talk about how they managed to run an election in a pandemic, in such a bitterly divided state and in a year when they had to process a record 1.9 million absentee ballots cast by mail, at dropoff sites or in person. Election clerks should flock to the Capitol to brag about pulling off an election under those circumstances, instead of being legally summoned and second guessed.

The 1,850 local clerks worked selflessly and tirelessly to oversee an “incredibly meticulous process,” State Elections Administrator Meagan Wolfe said. “While the results are still unofficial and are currently being triple-checked… we have not seen any credible information to cast any doubt on those unofficial results.”

Milwaukee Elections Commission Director Claire Woodall-Vogg, for example, said she is “more than willing to…shed great light on the open and transparent nature of our election operations.”
Another reason why subpoenas may not be issued: The chairman of the Senate Elections, Ethics and Rural Issues Committee is Republican Sen. Kathy Bernier, who spent 12 years as the clerk — and top elections official — in Chippewa County. Will Bernier, up for re-election in two years, sign subpoenas forcing local elections clerks she once worked with to come to the Capitol to be interrogated about voting fraud? Don’t bet on it.

At that joint hearing, state and local election officials should ask legislators to change the law that says they can’t start counting absentee ballots until polls open at 7 a.m. Several states allow absentee ballots to be counted before Election Day, so poll workers — who counted a record 1.2 million absentee ballots — don’t have to work through the night, and maybe through much of the next day, processing them. Up-all-night poll workers are more likely to make mistakes.

Republican Rep. Joe Sanfelippo, a member of the Assembly Elections and Campaigns Committee, issued a statement raising these questions about vote fraud:

-”The Wisconsin Election Commission ignored state law and refused to deactivate the eligibility of more than 230,000 unverified names on the voter list.” A federal count upheld the commission’s decision on whether to delist those voters – so-called “movers” who didn’t respond to postcards mailed to their last address. The case is now pending before the state Supreme Court.

-”Clerks in Milwaukee and Dane Counties colluded [adding] nearly 250,000 individuals to the ‘indefinitely confined’ voter list.” The hearing will explore when rules allow a voter to affirm that they are “indefinitely confined” — an allowance Republicans made when they required a photo ID to vote.

-*”Officials in Madison defied state law confirmed by a court ruling and began early voting weeks ahead of the time allowed by law.” Madison officials insist their collections of absentee ballots in city parks were legal.

Fair questions, Joe. Ask them at the hearing.