You Can Fix Your Rejected Ballot

1,400 Wisconsin voters have turned in faulty absentee ballots. It’s not too late to fix it. 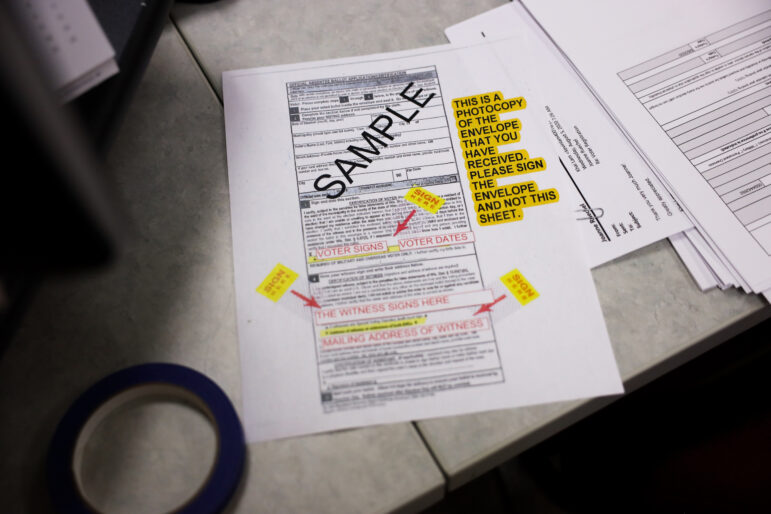 Joanne Ruechel, town clerk of Rib Mountain, Wis., sent out 1,348 absentee ballots ahead of the Aug. 11, 2020 partisan primary, and included a sample ballot with instructions on how to fill it out, to try to prevent the errors she saw during the April 7, 2020 primary. She made these instructions by hand, as they were not provided by the county or state for the election. Photographed Aug. 11, 2020. Coburn Dukehart / Wisconsin Watch

When Melissa Lemke got a call that her absentee ballot had been rejected, she was convinced there had been some mistake. As an alderwoman in Racine, she knew how important it was to carefully fill out her ballot and envelope, and she’d done so successfully in past elections. 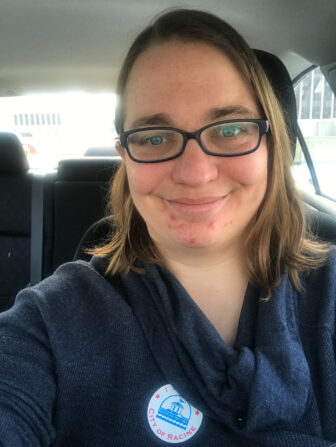 Racine City Council member Melissa Lemke is among the hundreds of Wisconsin voters whose absentee ballots were already rejected ahead of the Nov. 3 election. Lemke forgot to include a witness address on the ballot envelope. She “cured” the ballot by going to an early voting site. Wisconsin voters have just a few days to correct absentee ballot errors to make sure their vote counts. She is seen here in the spring of 2019 when she was on the ballot in Racine and voted in person. Courtesy of Melissa Lemke

She thought back to the day she submitted her ballot, and remembered being engrossed in conversation with her partner about local politics.

“I was probably just talking more about the issues than paying attention to the directions,” she said. Lemke misunderstood the witness address field, and left it blank. The clerk mailed her ballot back, Lemke corrected it and submitted it at an early in-person voting location in Racine.

As the general election approaches, the state is seeing a small number of errors among the 1.3 million absentee ballots that have been returned. Data from the Wisconsin voter database requested by Wisconsin Watch showed that nearly 1,400 ballots were rejected as of Oct. 21.

Without action by the voters, those ballots will not count. But if voters act quickly, they can correct them.

Dozens of states, including Illinois, Minnesota and Iowa, have laws requiring clerks to alert voters if their ballot is rejected in the general election, according to the Voting Rights Lab. Wisconsin is not one of these. Still, clerks are encouraged to follow the practice.

“Clerks take this very seriously,” said Reid Magney, spokesman for the Wisconsin Elections Commission, noting that the vast majority contact voters when there is an issue.

Wisconsin’s approach to curing the ballot falls in the middle when compared to other states.

Hawaii, for example, requires clerks to notify voters of any errors and allows up to five days after the election to fix them.

In Wisconsin, civic and political groups use publicly available databases to identify and contact voters when there are problems with their ballots. Lemke said she received two calls and a text from some of these groups flagging her ballot.

Voters can easily track the status of their ballot using the myvote.wi.gov website, selecting “Track my ballot,” and entering their name and date of birth.

Should a person decide to change a vote after the ballot is submitted, it is possible to do so. But the deadline is this Thursday, Oct. 29.

“Every voter has up to three tries, essentially, both at the polling place, and absentee. So if someone has voted absentee, and they change their mind on how they want to vote, they have to make that decision by the Thursday before the election,” said Claire Woodall-Vogg, executive director of the Milwaukee Election Commission. 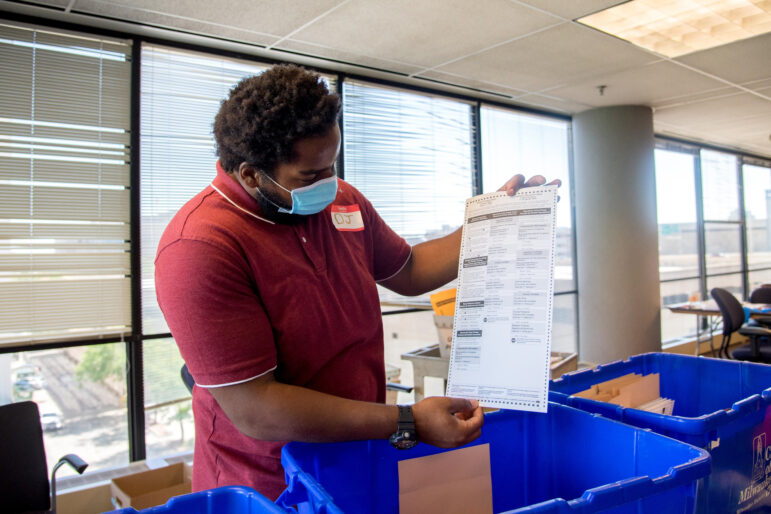 Poll worker DeAngelo “DJ” Nash displays one of the blank absentee ballots at Milwaukee’s central count facility on Aug. 11, 2020. The blank ballots are used when necessary to reconstruct absentee ballots that were damaged or not filled out properly. Will Cioci / Wisconsin Watch

The voter must call the clerk and cancel the ballot before submitting a new one, Woodall-Vogg added. Then, the person can cast a new vote in person on Election Day or by absentee in-person voting.

Voters who wish to cast a ballot in person after requesting an absentee ballot can do so, as long as they haven’t mailed in the absentee ballot. Voters must destroy their ballots at home or bring them to the polls to be destroyed before voting in person. If they have mailed back their ballot, they must cancel it before voting on Election Day by contacting the municipal clerk’s office.

Clerks mark off voters in a ledger which is updated by Election Day and will show if someone has already cast their vote, Burden said.

“There are a lot of protections in place to make sure that system has integrity. It’s not possible for a voter to submit a mail ballot and then also go into the polling place and cast a second ballot,” Burden said.

As Wisconsin does not allow absentee ballots to be counted until Election Day, most of the errors so far that caused ballots such as Lemke’s to be returned or rejected relate to the three fields on the envelope that must be filled in: the voter’s signature, witness signature and witness address.

There may be errors on the absentee ballots themselves, such as voting for two candidates in a race where only one person can be elected. But in Wisconsin, these won’t be identified until the ballots are counted on Election Day — which is too late to fix them.

In April, this was a sizable problem, as many Wisconsin residents made errors on their ballots, often while submitting an absentee ballot for the first time. An APM Reports and Wisconsin Watch analysis of data from the April primary found that about 60% of the approximately  23,000 ballots that were rejected went uncounted because of these errors.

Others were rejected because they were postmarked after Election Day. Many of those voters were never notified because clerks were too overwhelmed to contact all those whose ballots were rejected in time to correct them.

This time around, absentee ballots that arrive after Election Day will be rejected. The U.S. Supreme Court on Monday ruled that all ballots must be received by clerks by Nov. 3, defeating efforts by Democrats to allow for a six-day extension. 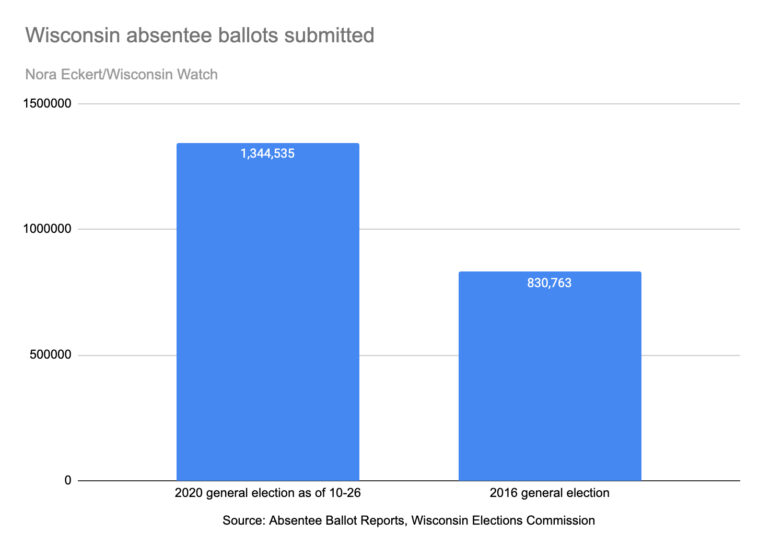 If voters fail to sign their own ballots, a clerk will likely attempt to contact them via phone, email or mail. The clerks could mail back the ballot for the voter to sign and return, but in the week before Election Day, it’s more likely they will request voters to come to the clerk’s office to sign the ballots. Voters can sign their existing ballot at the clerk’s office in the presence of their original witness, or the clerk can “spoil” the ballot and issue a new one to the voter.

“It can take up to seven days for a ballot to get through the mail,” Magney said. “We’re encouraging people to return their absentee ballots as soon as possible, so if there’s a problem, they can get it fixed.”

Because of time constraints, clerks around the state may not be able to contact voters about ballot errors.

“As you get closer to Election Day, that window (to alert voters) starts closing,” said Erin Grunze, voting and elections consultant for Common Cause Wisconsin, a nonpartisan group that helps with voter outreach.

Grunze said she’s heard from a clerk who, after being unable to reach a voter over the phone or email, attempted to deliver the incorrect ballot to the person’s home. “You can hear it in the voices of some of those clerks; it just breaks their heart because they’re good public servants who want every vote to count.”

How can I get a witness?

Wisconsin is one of nine states that require witnesses to sign an absentee ballot envelope, according to the nonpartisan Brookings Institution. This requirement creates more opportunities for errors. It’s especially difficult for some residents to have another person witness their ballot during the pandemic because of possible exposure to COVID-19. 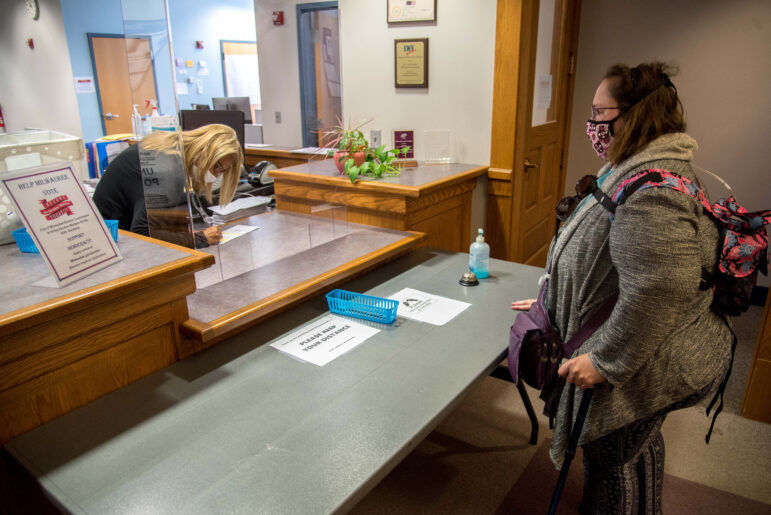 Lee Ann Medina, right, looks on as a Milwaukee Election Commission employee witnesses her absentee ballot on the day of the election on Aug. 11, 2020. Medina did not vote in the April election because she was unable to secure a witness for her absentee ballot and feared in-person voting during the pandemic. Will Cioci / Wisconsin Watch

The Wisconsin Elections Commission website advises voters who are having difficulty finding a witness to ask “a family member, friend, or neighbor to witness their ballot through a window, from a distance, or on video chat (as long as they’re able to sign it later).” Voters can also ask store clerks to witness their ballots, the commission says. There are no exceptions to the witness rule, even for indefinitely confined or overseas voters.

Some states changed their absentee ballot procedures during the pandemic to eliminate the need for a witness signature. Days before the April primary, a Wisconsin federal judge overruled the requirement for a witness, but the ruling was quickly overturned.

If there is no witness signature on the ballot envelope, the clerk alerts the voter and returns the ballot with the request to find a witness to sign it. The voter can also vote early in person, or on Election Day.

Another common error is when witnesses neglect to put their address on the envelope. Some voters make this mistake when they live at the same address as their witness. The Wisconsin Elections Commission permits clerks to fill out witness addresses using information they draw from the voter database.

“We just do that in a red pen, so that we know it was our office and not the voter providing the address,” Woodall-Vogg said.

Lemke knows that everyone is bombarded with messages about why this election is important. “You can’t go five feet, nationally without hearing about the election,” she said with a laugh.

But this one is especially important to her. Lemke said her role as a Racine alderwoman is directly affected by the results of this election, including a contentious referendum on whether to raise the tax levy to fund health care for city government employees and retirees.

“I will eventually use whatever information or whatever votes people have in how I do my work,” Lemke said.

This article is available for reprint under the terms of Votebeat’s republishing policy. The nonprofit Wisconsin Watch (wisconsinwatch.org) collaborates with WPR, PBS Wisconsin, other news media and the University of Wisconsin-Madison School of Journalism and Mass Communication. All works created, published, posted or disseminated by Wisconsin Watch do not necessarily reflect the views or opinions of UW-Madison or any of its affiliates.