‘Does My Vote Matter?’

Mixed emotions as city’s minority and low-income voters head to the polls.

By Isiah Holmes, Wisconsin Examiner - Oct 26th, 2020 03:10 pm
Get a daily rundown of the top stories on Urban Milwaukee 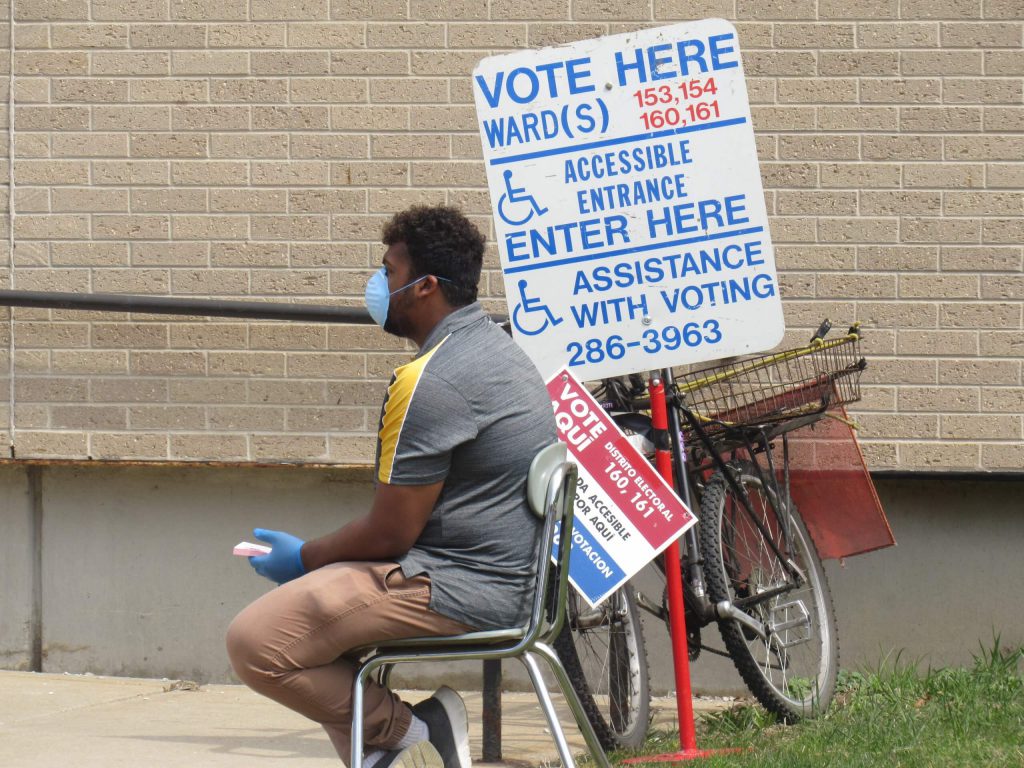 With Nov. 3 fast approaching, Milwaukee residents have expressed a mixture of suspicion of the systems that have worked against minority and low-income voters and excitement about the sense of empowerment coming out of the Black Lives Matter protests that have been going on since May 29.

“We’ve been talking about elections and getting out the vote,” says Khalil Coleman, a local organizer and community activist who has been involved in recent protest marches. “We have elected officials walking with us, people who work with elected officials out here.” By going to the marches, elected officials like Rep. David Bowen (D-Milwaukee) and Rep. Jonathan Brostoff (D-Milwaukee) have been connecting  with constituents as well as informing them about voting this year. 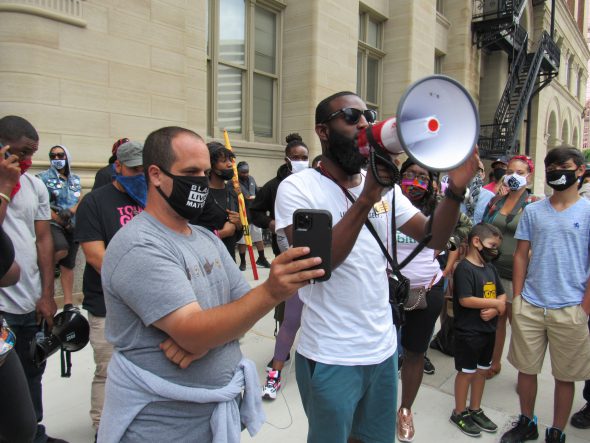 Rep. Jonathan Brostoff (left) stands beside Rep. David Bowen who is speaking to protesters through a megaphone. Photo by Isiah Holmes/Wisconsin Examiner.

Bowen acknowledges the steep barriers to fair elections and representation faced by disadvantaged Wisconsin communities. “You have gerrymandered districts,” Bowen tells Wisconsin Examiner. “That’s the real root for why people aren’t running for office like they could, from different political sides. So you have really Democrat or really Republican districts. They’re not really balanced.” Bowen also highlights misinformation targeted at minority and low-income voters. Deshawnda Bailey, a Milwaukee resident, agrees.

Bailey feels residents are inadequately informed about voting and registering to vote by state and local officials. “The Elections Commission was really poorly prepared for the pandemic,” Bailey tells Wisconsin Examiner. She feels, particularly when it came to the so-called “pandemic primary” election in April, the government’s priority didn’t appear to be making sure everyone’s vote counted. In the run-up to the November election, Bailey feels there’s been a focus on “trying to keep people in quarantine and not even bringing up that we can still go out and exercise our right to vote.”

While Bailey voted absentee in April, the disorder and uncertainty surrounding that election makes her reluctant to vote absentee again. The feeling that Milwaukee has been repeatedly targeted by voter suppression tactics also makes voters like Bailey wary.

During the April primary, the number of Milwaukee polling sites shrank from 180 locations to five. With the GOP fighting in court to prevent the postponement of the election to allow the system to adjust to the pandemic, Milwaukee residents braved the uncertainties of in-person voting. For hours, many of them waited in lines which stretched around neighborhood blocks, packed in tight enough to make social distancing impractical.

“I think there was a sustained attack on voting rights that the GOP had been pushing,” says Brostoff. “And there’s especially — in parts of Milwaukee with higher Black populations — there seems to be no end to this idea of voter disenfranchisement from the Republicans.”

Brostoff considers the chaos of the April election part of that effort, along with an unsuccessful push to eliminate same-day voter registration as well as reductions in the number of hours when polls are open and Wisconsin’s strict voter ID requirement. These measures “were only meant to suppress the vote,” Brostoff says. “There’s no good policy intention behind them.”

Add to that the Trump administration’s rhetorical attacks on absentee voting and its efforts to destabilize the U.S. Postal Service, and there is plenty of cause for concern. Despite this, voters in Milwaukee have been energized this year by protest and civic engagement.

Overt voter suppression efforts also appeared to provoke a backlash in April, making people even more determined to exercise their right to vote.

“We understand in our community that voting is a mis-trust,” says Coleman. “So one thing we do is try to connect it to social causes, social justice — to get people to understand that it’s their elected officials that continue to allow these things to take place.” Coleman, and many people who have been marching in the streets for months, don’t just have their eyes on national electoral politics. “District Attorney John Chisholm,” Coleman remarks, “nobody ran against him.”

Chisholm, who announced recently that he will not press charges against a Wauwatosa police officer who shot three people over the last five years, provoking outrage, has repeatedly run unopposed. With greater attention focused on  the outcomes of police shooting investigations, many protesters have set their sights on removing Chisholm from office. “The street stuff is great because it draws awareness, it brings attention,” Coleman tells Wisconsin Examiner. “But to connect the streets to the politics, it’s like it’s always going to be a Catch 22. I want to see the revolution, I want to see change.” 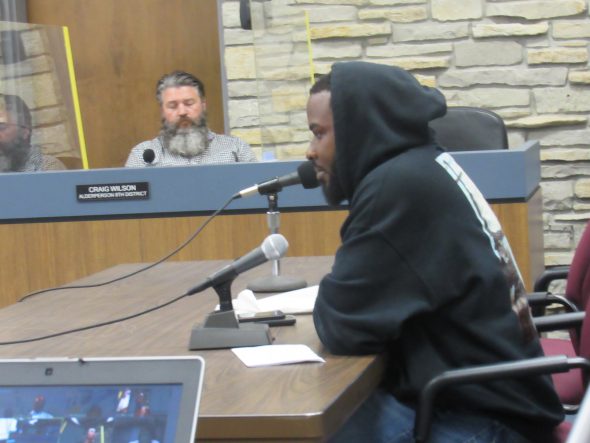 Andrea Rodriguez, a community organizer who ran for local office, has confronted low morale around voting in the immigrant community where she works. “Does my vote matter?” is a question Rodriguez says she has encountered all her life. “It’s not my place to shame them for not wanting to vote,” Rodriguez says of the people she serves.

After being raised on Milwaukee’s mostly African American North Side, and then doing community organizing on the predominantly Latinx South Side, Rodriguez has seen how both communities have struggled with low voter engagement and overt disenfranchisement. In both areas many people rent rather than owning their own homes.

“People move, and it’s just a part of life,” she explains. “And with the economy where it is, we should expect that more often.” The challenge of double-checking your voter address and ensuring you are registered becomes even more complicated when English isn’t your first language.

“People have that perception that because we are a more heavily immigrant neighborhood that we don’t have the right to vote,” says Rodriguez, “which is not true. And I always say, especially as an educator, our younger leaders right now and people in their teens and 20s are so inspiring because they are organizing, they are educated, and they are doing what they can to change those trends.”

Getting out to vote

The Milwaukee Elections Commission released a list of all the polling sites that will be open on Nov. 3. Drop-off sites for absentee ballots are also listed on the commission’s website. But even in the midst of a fraught presidential election, some voters remain disaffected. Coleman rejects the idea of settling for “the lesser of two evils,” as he feels many did during the 2016 election. “With this presidential election with Joe Biden vs. Donald Trump and all of them, I just don’t know how it’s going to play out,” he says. He believes the two-party system dumbs down politics, and he remains more engaged with activism than electoral politics.

Bailey, who plans to vote and to encourage as many of her community members as possible to vote, too, remains focused on what she feels is at stake on Nov. 3. “Everything is at stake,” she tells Wisconsin Examiner. “The livelihood of Blacks in Milwaukee is at stake. Fair housing, fair education, equity, and being able to dismantle this systemic racial oppression that we’ve been going through for 400 years globally is at stake. We still have to allow Black votes, brown votes, minority votes to matter, and not keep oppressing them as has been done.”