State commission seeks to end gerrymandering, Thursday is first of 8 hearings across Wisconsin.

By Melanie Conklin, Wisconsin Examiner - Sep 29th, 2020 11:30 am
Get a daily rundown of the top stories on Urban Milwaukee 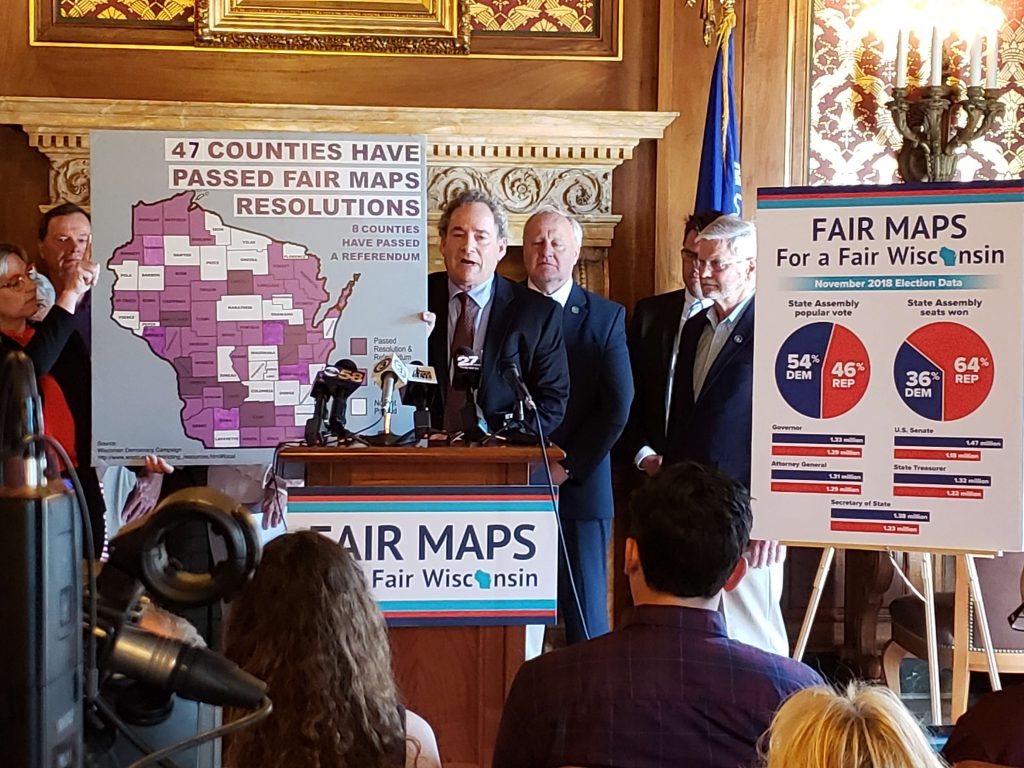 A press conference in July 2019 issuing a call to action to demand Fair Maps for Wisconsin. Photo from Wisconsin Examiner.

For the past decade, Wisconsin has been divided into congressional and legislative districts using some of the most gerrymandered maps in the nation.

If you want to have a say about how Wisconsin’s new maps should be done for the coming decade, Gov. Tony Evers’ newly appointed People’s Maps Commission — charged with proposing fair, non-partisan maps for Wisconsin — will hold its first public hearing this Thursday, Oct. 1.

Sen. Dave Hansen (D-Green Bay), who throughout his years in the state Senate has been one of the most outspoken advocates for ending gerrymandering, has authored legislation requiring non-partisan redistricting every year since 2013.

“As someone who has been at the forefront of ending gerrymandering in our state, I am pleased that Gov. Evers created this commission and I urge everyone who wants to see fair maps to take part in the upcoming hearing,” says Hansen.

The hearing is online in the evening: Oct. 1 5:30-8:30 pm. If you wish to testify, register here in advance by 5 pm on Tuesday, Sept. 29. Written testimony is also being accepted online.

“The Republicans in the Legislature refused to give this issue a public hearing despite the fact that a large majority of Wisconsinites support fair and competitive elections,” adds Hansen. “Finally, people will have the chance to make their voices heard and have a part in drawing fair maps.”

Evers introduced the idea of having the people of Wisconsin draw the maps during his 2020 State of the State speech and subsequently created the commission with an executive order.

“I believe, and Wisconsinites do too, that people should get to choose their elected officials, not the other way around,” said Evers at the time. “Over the last several years, 51 Wisconsin counties, representing almost 80 percent of the people of Wisconsin have passed resolutions or referenda supporting nonpartisan redistricting in our state.”

Members of the People’s Maps Commission will be required to participate in hearings across Wisconsin. Because of COVID-19, the Commission will likely conduct hearings virtually. There will be at least one hearing for each of the eight congressional districts during the following tentative dates: