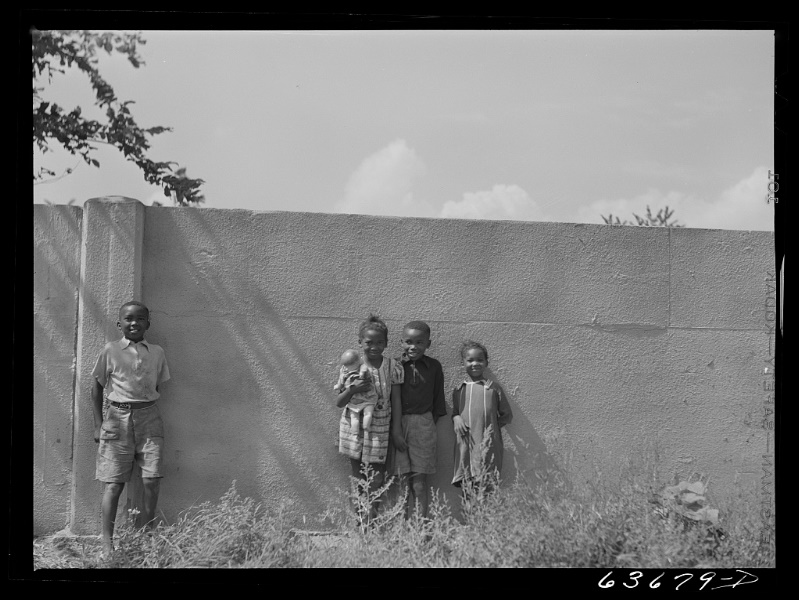 This wall in Detroit, Michigan was built in 1941 to separate an African-American neighborhood from a new housing development for white residents. Photo from the Library of Congress. (Public Domain).

High-speed rail plans move along in two states this week. A company in the Netherlands rents bikes by the month, and fixes flats. Some towns want streaming companies to pay taxes.

North Carolina and Texas get the go ahead for high-speed rail plans: This week high-speed rail moved forward in North Carolina and Texas. The North Carolina Department of Transportation received a federal grant to purchase right of way for a passenger line that would run from Raleigh to Richmond, Virginia. At the same time, a planned passenger line between Houston and Dallas received important approvals from the Federal Railroad Administration to move forward. (Richard Stradling | News and Observer & Dug Begley | Houston Chronicle)

Europe’s blue bikes: A company in the Netherlands is offering a new way of providing bikes, by the month. The service fee includes free flat tire fixes and a full replacement bike if yours needs more repairs. It just started out as a service for students with 20 bikes, but now Swapfiets has 35,000 members in Amsterdam alone. (Nate Berg | Fast Company)

Cash strapped towns sue streaming companies for taxes: As more people cut the cord on cable service, streaming over the internet entertainment such as Netflix and Disney+ are taking off. But cities feel like these companies should be paying taxes similar to their cable utility predecessors and are looking to courts to decide if that’s possible. (Eriq Gardner | The Hollywood Reporter)

A nation of walls and racial barriers: Walls, barricades, and fences often serve to psychologically and physically separate marginalized communities of color from white people in the urban built environment. Designer Chat Travieso takes a look at the long history of these walls and how they were erected as a physical manifestation of racist policy goals. (Chat Travieso | Places Journal)

If state and local governments are condensing their balance sheets, they’re laying people off. They’re cutting spending on equipment. Capital spending is cut early during downturns. All of that is sucking demand right out of the economy.

–Amanda Page-Hoongrajo in City Monitor discussing how cities and the economy are going to suffer absent federal support.

This week on the podcast, we celebrate the 300th episode of Talking Headways by sharing a chapter from our audiobook production of 1909’s Town Planning in Practice by Raymond Unwin.