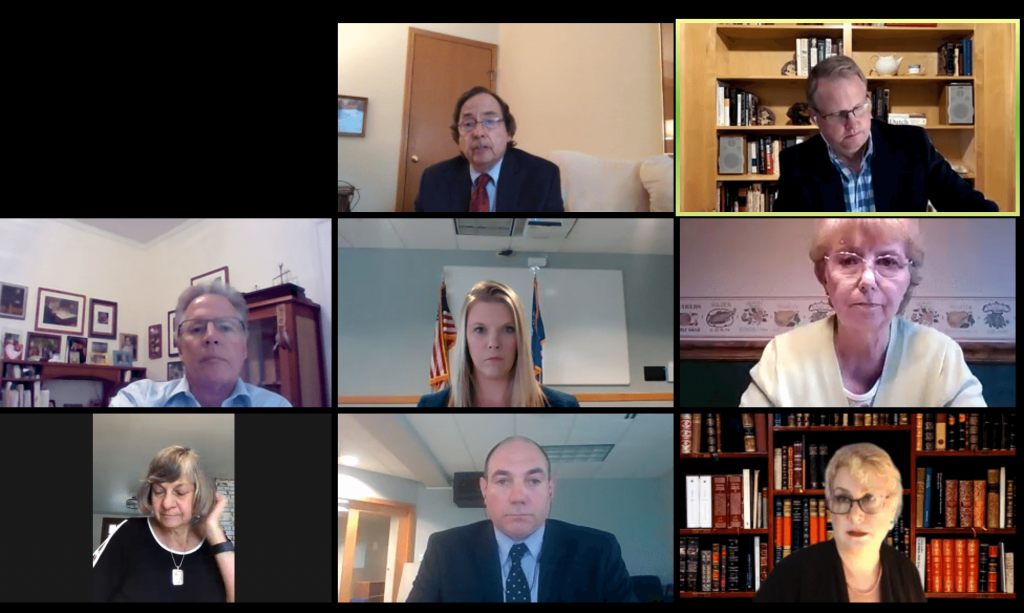 A Green Party official asked Wisconsin Elections Commissioner Robert Spindell to recommend a “good lawyer” in the days after the WEC did not allow the party’s presidential and vice presidential candidates onto the 2020 ballot, according to emails obtained by the Wisconsin Examiner through an open records request.

The issue of the Green Party’s effort to get on the ballot came onto Spindell’s plate on Aug. 20 when the nominating papers of the party’s presidential and vice presidential candidates, Howie Hawkins and Angela Walker, were challenged over inconsistencies with Walker’s listed address.

After a long and heated discussion, Spindell said that maybe the issue shouldn’t be decided by the six-person body.

“Maybe this is an issue that needs to go to court,” he said.

The next day, a Green Party official asked Spindell who they should get to represent them in court.

On Aug. 21, Kevin Zeese, press secretary to the Hawkins campaign, asked Spindell in an email, “Who do you think would be a good lawyer to handle this case?” On Aug. 22 Spindell responded, telling Zeese to call him, and giving him his phone number.

Spindell says he recommended two attorneys to Zeese — Michael Maistelman, who worked with the Democratic Party in a challenge to the candidacy of Kanye West, and Andrew Phillips.

The exchange between Zeese and Spindell began earlier in the afternoon on Aug. 21 when Spindell — less than 24 hours after  the WEC deadlocked 3-3, preventing the candidates from getting on the ballot — emailed Zeese, expressing sympathy that the bid to get on the ballot had failed.

“I am very sorry, but not surprised, the three Democrat Commissioners fought hard to keep the Green Party off the Ballot,” Spindell wrote. “The Democrat Party obviously believes this action would push your members to vote for Biden — if they could not vote for their own Green Party Candidates.  As I mentioned at the hearing yesterday, I had examined every single petition page, prior to the hearing, and found each and every page to be very carefully and well done.  A few pages may have had the wrong VP address for a particular date, but only a very few from my examination.”

Spindell went on to ask Zeese questions that get to the heart of the challenge to the party’s candidates.

“At the hearing I gave my best answers to these questions based upon my review of your documents submitted,” he continued. “But, I am curious, (only personally- not as a member of the Commission). You certainly do not need to provide me with those two answers – but if you want, and it will not interfere with your possible lawsuit, I would sure like to know.”

Earlier in that meeting, Spindell was the only commissioner to vote in favor of allowing hip-hop artist Kanye West onto the ballot — even though his nomination papers were turned in late (also with the help of state Republican operatives).

Spindell says he briefly helped the Green Party because he saw the actions of the WEC as an “injustice.”

“I think it’s an injustice,” he continued. “I try to do what I think is right.”

On Monday, the Wisconsin Supreme Court voted 4-3 not to allow Hawkins and Walker onto the ballot.

The Hawkins campaign says that it found legal representation through a Google search, rather than Spindell’s emails and phone call with Zeese.

“We have had no conversations with anyone from the state or national GOP,” campaign spokesperson Robert Smith said. “Our campaign manager received no referrals from Republicans, rather she reached out to law firms simply by searching Google. Many did not give the courtesy to reply. With time against us, we went with what we got.”

Michael O’Neil, a spokesperson for the Green Party of the United States, denied that the party had contact with the commission.

“No officials from the Green Party of the United States had communication with the commission,” he said.

Aside from Hawkins, Zeese served as an adviser to former Green Party presidential candidates Jill Stein and Ralph Nader, according to a biography of him on the Green Party website. He was previously nominated as a Green Party candidate in Maryland and he served as Attorney General of the Green Shadow Cabinet — a group of spokespeople who lodge opposition to the majority party. Zeese died on Sept. 5. His obituary is posted on the Green Party site.