By Gretchen Schuldt, Wisconsin Justice Initiative - Aug 10th, 2020 02:11 pm
Get a daily rundown of the top stories on Urban Milwaukee

Any significant budget cuts to the Milwaukee Police Department will affect staff and could well result in disproportionate cuts in the number of officers of color on the force, city figures show.

“I don’t have a magic wand to change that,” said Ald. Michael Murphy, chair of the Common Council’s Finance and Personnel Committee.

About 95 percent of the department’s operating budget this year, or $281.4 million of $297.4 million, is devoted to wages and fringe benefits, so any significant budget cut would have to include cuts in staffing.

The city’s contract with the police union calls for the most recent hires to be the first to lose their jobs when and if the cuts come. If officers are hired at the same time – and officers in the same academy graduating class are considered to have the same seniority date – then their placement on the eligibility list at the time of hire is the tiebreaker, said city Labor Negotiator Nicole Fleck.

Most officers of color are bunched at the low end of the seniority scale, as the chart below shows. There are fewer people of color who become officers in the first place and they leave the job at faster rates than whites.

While there are 112 African-American police officers with fewer than five years’ experience, there are just 20 with six to 10 years’ service, and 34 with 11 to 15 years on the job.

White officers also leave, but at lower rates, which adds to their edge in seniority. There are 271 White officers with fewer than five years’ experience, 154 with six to 10 years’, and 169 with 11 to 15 years of service. 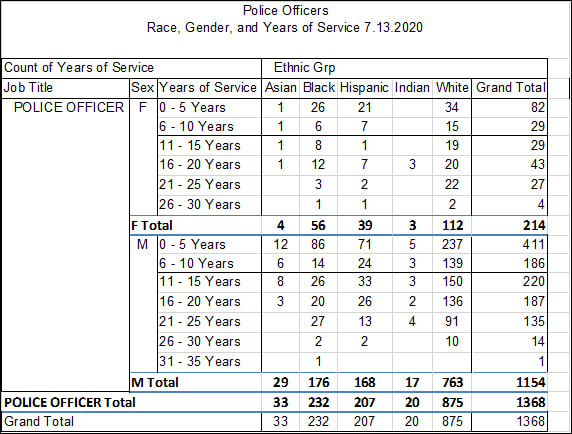 The city eliminated 60 police officer positions this year through attrition, Murphy said, and the financial situation looks worse for next year. City revenue is taking a hit because the coronavirus crisis is affecting tax collections at both the city and state levels.

The Common Council has indicated it will consider a police budget cut of 10 percent, or roughly $30 million. Former Police Chief Alfonso Morales, in a Milwaukee Journal Sentinel op-ed, said that would mean the loss of about 375 officer jobs.

Activists are seeking a $75 million cut and want the money to go to other services. The Police Department has asked for an $18.5 million budget increase, according to budget documents.

A $75 million cut, Murphy said, would mean about half the force would go.

Markasa Tucker, director of the African American Round Table, a driving force behind the request for cuts, did not respond to a request for comment. Neither did Common Council President Cavalier Johnson.

​Officers of color would likely be hit disproportionately, and that would not be good for the city. Its police, Murphy said, “should reflect the community.”

The city does not have many options, he said. “I don’t know how to do it otherwise with the current (contract) restrictions in place,” he said.