Hoan Bridge. Photo by Sulfur at English Wikipedia (Transferred from en.wikipedia to Commons.) (GFDL) or (CC-BY-SA-3.0), via Wikimedia Commons

The organizers of the Light the Hoan bridge lighting campaign have secured funding to light the west side of the bridge this summer.

The lights, which will be installed on the yellow arching bridge elements, cables connecting the arch and roadway, and horizontal blue wall, are programmable LEDs from Dutch electronics conglomerate Philips.

Installation work will begin in late July with test lighting beginning in September. The group had originally hoped to have the bridge lit for the 2020 Democratic National Convention, originally scheduled to run this week, but the convention itself has been delayed and scaled back because of the pandemic.

The color-changing lights can be synced with music, made to flash with home runs at Miller Park or three-pointers at Fiserv Forum and programmed to specific colors to mark holidays, months or special events. Philips installed test lights on the bridge in November 2018 that flashed every time the Milwaukee Bucks scored during a game against the Boston Celtics. A demonstration was also run that showcased the color range and motion capabilities of the lights.

The project, to be installed on a state-owned bridge, is entirely privately-financed. Ian Abston and Michael Hostad have led a fundraising effort since 2018 through the Daniel Hoan Foundation.

The organization has raised $3.5 million and needs to raise an additional $1.1 million to complete the installation of lights on the bridge’s less seen east side.

“In times of crisis, light can be a symbol of hope and comfort. We know that lighting a bridge doesn’t solve our health or social challenges, but, from day one, we wanted this project to be about more than lights on a bridge,” said Hostad in a statement. “To that end, moving forward with lighting the Hoan allows us to demonstrate that mission through programs like Code the Hoan, which creates unique STEM education opportunities for local students who will be able to program the lights on the bridge.”

The organizers are advancing a “Code the Hoan” partnership with local schools. The effort will provide real-world STEM (science, technology, engineering, mathematics) education opportunities to area students via a partnership that will teach programming and afford the ability to control the lights on the bridge. The organization has partnered with Philips Signify and area non-profit Islands of Brilliance on the effort.

The organization is also launching the “Shine a Light” campaign where one night per month the bridge will be lit in the colors of an area non-profit including ACTS Housing, Black Box Fund, Boys & Girls Club, Imagine MKE, Urban Underground, United Community Center and We Got This. Groups can apply to be part of the program on the Light the Hoan website.

“While we’re all disappointed that this pandemic robbed Milwaukee of its opportunity to sit at the center of the global stage as scheduled for 2020, we’re incredibly proud of all the work and partnerships that went into this project moving ahead this year, when Milwaukee needs it the most,” said Abston. “When all other options were off the table, we found a way to get this done, and we’re incredibly proud to move it forward to inspire the people of Milwaukee. I’m excited about the impact our generation can have on our skyline and our community.”

Launched in late spring 2018, the group has announced “significant donations” from The Lacey Sadoff Foundation, the We Energies Foundation, the Milwaukee Bucks, the Herzfeld Foundation, MillerCoors and Concurrency. A $1.2 million anonymous donation was announced in November 2019. Over 1,600 contributions have been made through a crowdfunding campaign designed to show community interest. 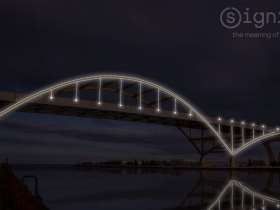 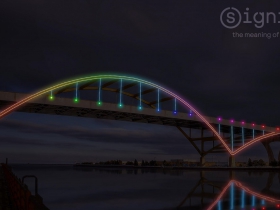 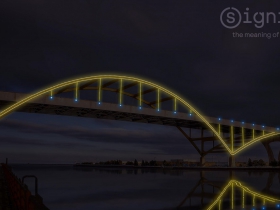 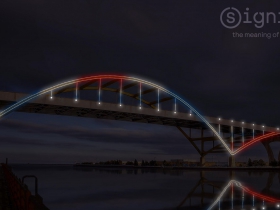